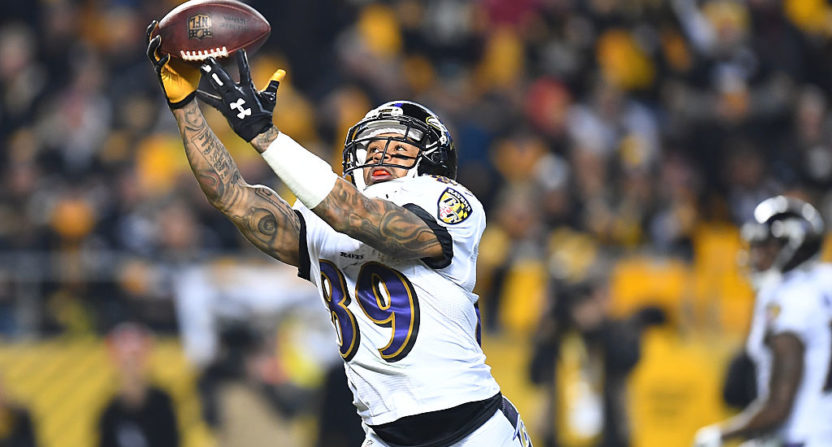 At the end of last season, Steve Smith retired after a lengthy career dating back to 2001 with the Carolina Panthers. Shortly afterwards in February of 2017, Smith joined the NFL Network as an analyst.

Despite his retirement and subsequent signing with the NFL Network, one team wants to bring Steve Smith out of retirement.

That’s right, the New York Jets are trying to bring Steve Smith out of retirement. This news comes from NFL Network’s Kimberly Jones who got the news from a very reliable source:

Well that settles that. If Smith isn’t interested, then it looks like he’s sticking at the Network for a little longer at the very least.

What makes this news even more odd is if the Jets were dying for a wide receiver or veteran leadership, why did they cut a veteran wide receiver and linebacker on Tuesday? This Steve Smith story comes out on the same day the Jets released veterans David Harris and Eric Decker.

Earlier this off season, the Jets cut Brandon Marshall.

And now the Jets are releasing WR Brandon Marshall, per sources.

All three players had been in the league since at least 2010, with Harris having played for the Jets for 10 seasons.

“It wasn’t an easy time. David has been a Jet all his life. He was born and bled green. Obviously, he was a guy very well-liked in the building. … It’s part of the business. It’s never an easy thing.”

As for Decker, he hasn’t officially been cut just yet.

“We advised Eric that if a trade doesn’t happen, we’ll move forward without him,” general manager Mike Maccagnan said.

It’s still strange for the Jets to cut players like Decker, Harris, and Marshall during the offseason and also reach out to a player who is retired in Smith. While it’s hard to compare Harris to Smith because they played different positions, we can compare Decker, Marshall, and Smith to each other.

Here are how the three wideout’s stats compared this past season:

At first glance it’s easy to notice two things: 1. Eric Decker was injured and didn’t play in nearly as many games as the other two wide receivers and 2. Smith had more receiving yards and touchdowns than the other two.

But that may be because Smith caught passes from Joe Flacco while Decker and Marshall were targets for a rotating door of Jets’ quarterbacks in Ryan Fitzpatrick, Bryce Petty, and Geno Smith.

So what are the Jets doing exactly? We may never know. But according to Maccagnan, these decisions are because New York will have a roster full of good players:

“It’s going to be a competitive roster,” he said. “There will be a lot of opportunities for a lot of players on this roster. We are doing things that we feel that are going to help this organization both short- and long-term.”

Not sure if I agree with that, but then again I don’t get paid to make the decisions Maccagnan and Bowles have to make.