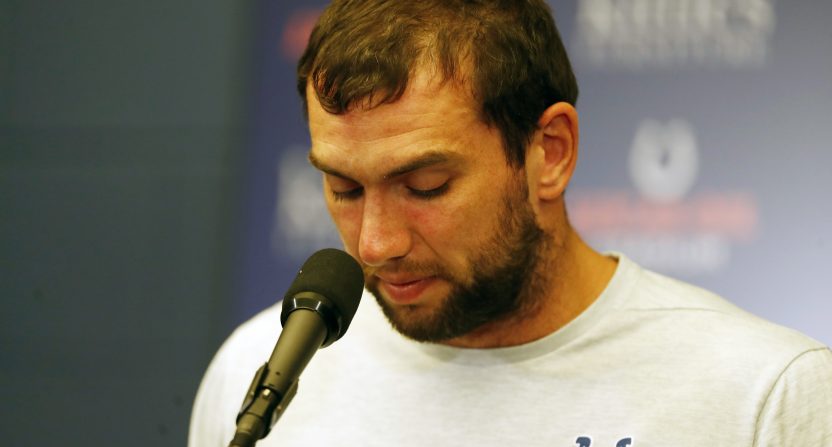 An F5 tornado of a news story touched down and smashed into the sports world last night at 9:28pm Eastern Time:

Filed to ESPN: Andrew Luck has informed the Colts he is retiring from the NFL, per source. There will be a press conference Sunday to make it official, but Luck is mentally worn down, and now checking out.

I use a tornado, not hurricane, for my analogy because no one saw this coming.

Not even Andrew Luck, who had previously planned a press conference announcing his retirement today at 3 PM before Schefter broke the news towards the conclusion of the Colts-Bears preseason game. Instead of a planned speech, Luck delivered a 24-minute press conference during which he emotionally broke down describing the impact that recovering from constant injuries has had on his health and the ability to live the life he wants. His remarks were heart-wrenching to watch.

You can view Andrew Luck’s retirment press conference in this link. https://t.co/Hl7gYC7asT pic.twitter.com/5b5B1Ly7B7

It’s clear that this decision was not an easy one for Luck, and I can only imagine the mental fortitude it took to walk away from the game he has loved dearly for the better part of his life. It must have been gut-wrenching and dizzying, and the loss of his football playing identity will take a while to recover from. It’s hard to imagine anyone not having empathy (or at least sympathy) for Luck in this situation.

And yet we live in the age we do and so it’s not uncommon for a tornado to swirl around the scum of the earth and drop their spectacularly awful takes on the website Twitter.com, which gives a platform to cretin sports media keyboard warriors who honestly should know fucking better.

And, yes I know, that writing an article about these dullards potentially gives them more attention, but it’s 2019 and if you don’t call out bad behavior when you see it, you’re on the wrong side of history.

If I gave you six guesses to identify the five dipshits behind the worst of the Andrew Luck takes, well, you wouldn’t need the extra guess. They’re the usual suspects, the ones you hate-follow, the ones that account for a minimum of 17% of Twitter-induced eye-rolls.

First up is Doug Gottlieb:

Doug, I’m gonna leave it to my new best friend Torrey Smith to clap back here, you insatiable idiot.

You stole credit cards because working was “too hard” https://t.co/SoLAVUwo3h

Because it can’t be said often enough: Doug stole a classmate’s credit card and had to transfer from Notre Dame, but still thinks he owns the moral high ground on just about everything.

Of course Dan Dakich, who deems himself god of Indiana sports takes, chimed in and it played out in predictable fashion as he flexed his ability to have awful takes in football as well as basketball.

Luck…..Hate to say I told you about Luck but as all the local and national guys were making excuses for him I told you this guy was not real

Predictably Pete Prisco joined the hot take parade, a nice change of pace for Pete who typically saves his worst takes for hating on the Saints.

Did Andrew Luck ever truly love it? Legit question.

Mike Florio stunningly had a worse take than OJ Simpson and the aggrieved fantasy football crowd. So congrats on being a worse human than OJ today, Mike.

Perhaps they will, but for second time in three years fans who bought season tickets under the assumption they would see Luck play are getting screwed. https://t.co/uQ5STSndaH

And that brings me to the scummiest of the scum: Dave Portnoy, whose eloquence will one day win him a Pulitzer no doubt. I’d like to see Dave tweet with a lacerated kidney, much less play football with one as Andrew Luck did.

Oh wait. This was actually the worst take of them all:

I’m honestly not sure why I’m still shocked by the callousness and ineptitude of so many, but here we are. I will say this: anyone who questions Andrew Luck’s toughness, heart, or passion for the game hasn’t spent any time actually studying Andrew Luck. And this is where my love letter to him starts.

I was fortunate to find football in 2009, and becoming a Stanford football season ticket holder remains the best decision I’ve ever made. First because it gave me something better to do on the weekends than aggressively chug mimosas at brunch, and second because it allowed me to bear witness to the once-in-a-generation talent that was Andrew Luck. I was fortunate to see Luck play for three spectacular years on the Farm as he graciously started the Stanford tradition of taking second in the Heisman (he was robbed at least once). Despite having a shot at being the #1 draft pick in 2011, Luck came back to school to finish his degree in architectural design, which was very important to him because even back then, he knew football wasn’t forever.

When Luck was drafted #1 by Indianapolis in the 2012 draft, we all had high expectations for him. We wanted Super Bowls and MVPs, but his career was derailed pretty early by injury. But in spite of that, his final stat line looks pretty damn good.

Leaderboard for most TD passes in the 1st 86 games…

If you’re feeling pretty raw about Luck’s abbreviated career, there is some pretty obvious finger-pointing to be done here, starting with Colts owner Jim Irsay and his hand-picked former GM Ryan Grigson, who failed to provide Luck any protection for the better part of his career, and it just cost the Colts a franchise talent.

Pressured 16 times per game under Grigson’s watch, MOST in NFL & hit MOST of any QB.

You can’t reasonably expect a quarterback to operate in a system that essentially had a few blinking yield signs as an offensive line for half a dozen seasons. But Luck would never blame them. Instead he played through torn cartilage in his ribs, a partially torn abdomen, a torn labrum, a lacerated kidney, a concussion, calf/ankle issues, and untold other injuries. For. Our. Entertainment.

Andrew Luck is allowed to bow out. He gets to enjoy his future with his wife and family. He is entitled to want to pick up his future kid without being in excruciating pain. He gets to live the life he deserves. Andrew Luck is a human being and his well-being is worth more than your dumb fantasy team.

As the funnel cloud clears, the stench of terrible sports media takes continues to surround us. It’s disappointing and unrelenting, but unfortunately the sports media landscape often rewards this type of blatant intellectual dishonesty and that’s only been accelerated with social media and sports talk radio amplifying this type of half baked drivel.

Stanford’s Geoff Meinken said it best:
“I’m proud to say I walked away from a sport that will outlive us all. Most people don’t know when to call it quits”