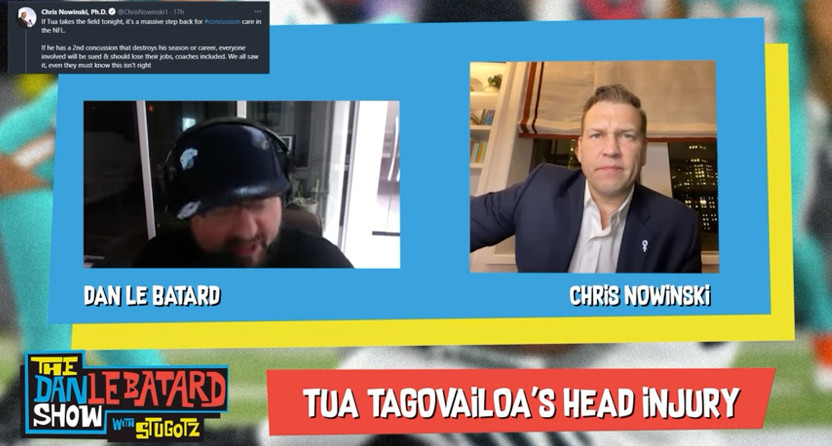 One of the most prominent figures in the long-running discussion around concussions and sports is Chris Nowinski. Nowinski is a former Harvard football player and professional wrestler, but he’s even more known for his work since his athletic career ended. He wrote Head Games: Football’s Concussion Crisis in 2006,co-founded the Concussion Legacy Foundation (with Dr. Robert Cantu), the VA-BU-CLF Brain Bank, and the Boston University CTE Center, and has a Ph. D in behavioral neuroscience from Boston University.

Nowinski, the CEO of that foundation, has long been willing to speak about concussions in sports. And he’s done that not just in academic articles or media articles, but also in real time on Twitter. He demonstrated that this week in particular with commentary on the Miami Dolphins‘ handling of Tua Tagavailoa‘s concussion evaluation Sunday (the subject of a NFLPA-initiated investigation) and then on the further head hit Tagavailoa took Thursday, which led to him leaving the game and being evaluated in hospital (and led to a whole lot of media discussion, both on- and off-broadcast). Here are some of Nowinski’s tweets on that, starting with commentary on the Sunday injury and return to play and going through Thursday’s game and the aftermath:

I'm calling bull$hit on the "back tweak theory". Watch the vid. Tua shakes his head multiple times to "clear the cobwebs", which is a specific sign of vision impairment after #concussion. He also wobbles getting up before falling. His return is a fail @NFL pic.twitter.com/oLUNiGsc2A https://t.co/zDauYxvuLc

Heck yeah they should. Indefensible. https://t.co/2vAIgFoS2b

I take no pleasure in being right. Pray for Tua. We saw this coming. Get angry. Get involved with @ConcussionLF to make sure the @NFL can't do this again. https://t.co/qbZLlgvk5S

This is a disaster. Pray for Tua. Fire the medical staffs and coaches. I predicted this and I hate that I am right. Two concussions in 5 days can kill someone. This can end careers. How are we so stupid in 2022. pic.twitter.com/D8S8eEbgda

Mike McDaniel said it's good Tua "doesn't have anything more serious than a #concussion."

I don't think this guy gets it. A concussion is a traumatic brain injury & posturing suggests brain stem injury. It's pretty high on the list of serious medical consequences of football. https://t.co/ZGF2LWERak

On Friday morning, Nowinski went on The Dan Le Batard Show with Stugotz, and spoke to Le Batard about the Dolphins’ handling of the Tagavailoa situation. And he did not hold back:

That starts with Nowinski discussing how his multiple concussions, including two in a month during his time in WWE, gave him permanent post-concussion syndrome. Beyond that, around the 2:30 mark, he describes the various possible concussion symptoms Tagavailoa exhibited after the hit Sunday, and says (2:50) “When you put those five things together, I am certain, I mean 99.99 percent certain, he had a concussion. And any doctor worth his salt assumes a concussion in that case, because you cannot rule it out either. He never should have gone back in the game. And then, even if he’s a star player, he’s never back in five days. That’s just end of story. Terrible management twice in five days that put him at risk for what happened tonight, and then who knows what happens from here? You can die from second-impact syndrome when you have two of these hits in a week, you can have careers end. My career was ended. It’s an embarrassment to everybody involved.”

Then, at the 4:20 mark, Nowinski says “Frankly, this is such a medical disaster that if I’m Tua and I recover from this, which is not guaranteed, I might say ‘I don’t want to play for this team any more because of what they did.’ No doctor should have believed him when he said his back hurt. And just think about that from the other side of it; he never grabbed his back, he never gave any indication his back hurt from the video. We know players have been honest for years that they’ve lied about concussions. When the doctors come onto the field, they always say ‘It’s my knee, it’s my ankle,’ they try to distract them. Any doctor should know this. This should not be happening in 2022. And we have to think about Tua as a human being; we have former NFL players developing CTE, dying by suicide. One concussion doubles the risk of suicide the rest of your life. This is a disaster.”

The whole interview is worth a watch, and it has Nowinski discussing the situation in detail. But the above quotes are especially significant for how strong they are, particularly around the decisions to let Tagavailoa return to play Sunday and then play again Thursday. The Sunday decisions were already the subject of that NFLPA-initiated investigation, and the players’ association dialed up the language around them further after Thursday’s game, with NFLPA executive director DeMaurice Smith saying “We insisted on these rules to avoid exactly this scenario. We will pursue every legal option, including making referrals against the doctors to licensing agencies and the team that is obligated to keep our players safe.” Nowinski’s commentary here Friday is going to add more fuel to the fire of that discussion.