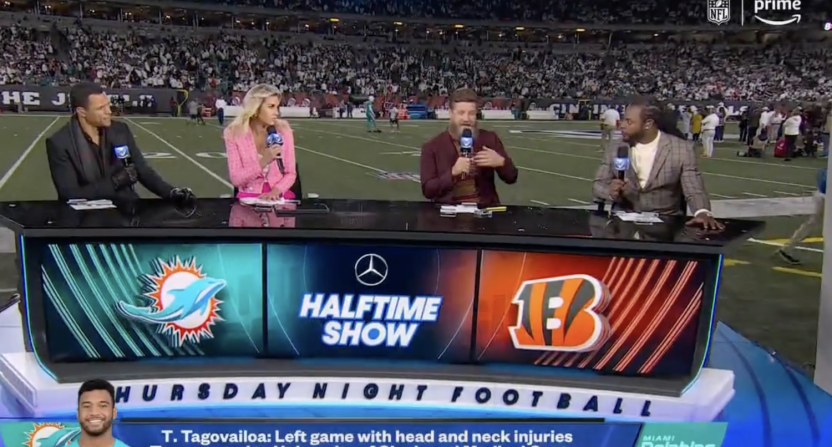 It was a true worst-case scenario on Thursday night for Miami Dolphins quarterback Tua Tagovailoa, the Dolphins organization, and the NFL. And Amazon, who paid billions for the rights to broadcast the game, appeared to be wholly unprepared to deal with it.

Four days ago, Tagovailoa suffered what appeared to many NFL viewers to be an injury with concussion-related symptoms. However, he would later return to that game having cleared concussion protocols. While the NFLPA launched a still-ongoing investigation into the matter, both the Dolphins and the NFL stood firm that Tagovailoa’s injury was back-related and that all protocols had been followed.

Fast-forward to Thursday Night Football where the Dolphins took on the Cincinnati Bengals. During the second quarter, Tagovailoa was sacked by Cincinnati defensive tackle Josh Tupou and the momentum slung Tua around, with his back and head hitting the turf extremely hard. Tua stayed down while his hands contorted above him. Eventually, a stretcher came onto the field and he was taken off.

Miami Dolphins quarterback Tua Tagovailoa has been stretchered off of the field in Cincinnati.

Almost immediately, the NFL world voiced its frustrations with the NFL and Dolphins organization for even allowing Tua to be on the field just days after a significant injury. Many were hoping that the Prime Video TNF broadcast crew and halftime studio show would step into the larger conversation surrounding the situation. Surely, Amazon wouldn’t be able to get away with something like last week’s verbal dance around the Deshaun Watson situation.

And yet, it became quickly apparent to viewers that the Amazon crew was lost at sea attempting to have an honest conversation about the injury and its place in the larger discussion around the NFL and CTE.

First, Amazon caught heat for replaying the injury beyond a necessary amount, which for many viewers was once. They also employed slow-motion and zoom-ins to a degree that many found distasteful given the nature of the injury.

Amazon didn’t need to zoom in and replay it in slow motion.

Just an amazing amount of insensitivity from so many people.

Also STOP showing the replay Amazon. And STOP showing him lying there on the ground — this doesn’t need to be re-aired throughout the game either, nor should it be. https://t.co/AhOIxuXJ3W

From the booth, Al Michaels and Kirk Herbstreit refused to speculate about the nature of the injury, which was a good idea. But they also didn’t dig into the larger discussion or provide context which detracted from the honest conversation that needed to happen.

The halftime show, however, is where Amazon’s TNF coverage really failed. The panel, which includes the host Charissa Thompson and former NFL players Tony Gonzalez, Ryan Fitzpatrick, and Richard Sherman, lacked the kind of journalist mentality that was needed at the moment. Not only did they fail to tell the story and scope of Tua’s situation, but they seemed to actively avoid any mention of necessary context. While they all expressed deep concern for the quarterback, which is human and valid, their discussion stopped way short of where it needed to be.

"As a player, you've gotta move on, you've gotta play the game. As the announcer, analyst, I’m having a tough time right now." – Ryan Fitzpatrick on — his former Dolphins teammate — Tua Tagovailoa pic.twitter.com/kvmwYA8cu0

Amazon just did an entire halftime segment on Tua without mentioning that Tua was tested for a concussion 4 days ago or that the NFLPA requested an investigation.

If there were a professional NFL journalist or reporter on this Amazon halftime set, the full story here would be told and analyzed. And the public would be more informed for it. Unfortunately, that is not the case.

To have any credibility whatsoever, Amazon must have someone who will raise the obvious question of whether Tua should have been playing at all tonight, after what happened on Sunday.

Sherman, in particular, was called out by some viewers, given that he once wrote an article in which he said he hated “Thursday Night Football” because of how the short week affects player heath.

Who gives a shit about the "identity" of the Colts and Broncos? Since when does Richard Sherman not call people – or the league — out on their BS?

Either someone at Amazon was checking Twitter or the broadcasting crew realized they needed to deal with the situation during the second half. In the fourth quarter, Michaels and Herbstreit finally discussed Tagovailoa going through concussion protocols on Sunday as well as the NFLPA investigation.

Someone got in the #TNFonPrime broadcast ear that it was getting criticized. Al Michaels and Kirk Herbstreit just discussed the Tua injury now. Michaels acknowledges the “hornet’s nest” the whole situation will open up for Dolphins. The NFLPA investigation was mentioned.

First mention of Tua testing for a concussion 4 days ago and the NFLPA requesting an investigation was by Al Michaels and Kirk Herbstreit.

In the fourth quarter.

*Amazon director gets in ear piece*

There were serious concerns that by the time the game was over, the post-game show would mirror the feel of the halftime one. However, here too, it was clear that someone behind the scenes was paying attention and serious adjustments were made.

Chief among the adjustments was that they were joined by news analyst Michael Smith, who brought some much-needed analysis about concussions, Tua’s situation, and the timeline of the NFLPA investigation. Viewers and media watchers were relieved to see someone on the Amazon set provide the information and context that was previously lacking. His impact then lent gravitas to a discussion by the former players about how scary concussions and injuries are, which was a much better use of their experience than trying to talk circles around the issue.

Michael Smith did an excellent job discussing the Tua situation on the postgame. John is 100% right here. All they needed was Smith and one of the former players to weigh in. https://t.co/5zuuzyeHJH

Much better than halftime. https://t.co/9gOiqaroaB

Amazon should be very thankful they have Michael Smith.

unsurprisingly, @michaelsmith doing a great job breaking down the timeline and questions that need to be asked re: the NFLPA investigation.

NFL fans and viewers are going to remember the trainwreck that was Amazon’s handling of the injury during the second quarter and halftime, but credit is due that they adjusted on the fly and figured out how to have a more honest conversation about it by the end of the night. That doesn’t absolve them of the gratuitous replays and tone-deaf conversations, but at least you can say that they heard the criticism and tried to fix it. If you want to say that they should have known better to begin with, well, we won’t argue.

There will undoubtedly be many conversations in the days ahead at Prime Video on the fallout and how to be prepared to have hard conversations about the sports league that you’re in bed with. The larger concern is, of course, Tagovailoa’s health and well-being. But Amazon learned an important lesson Thursday night about what it really means to be an NFL broadcast partner.

What the league wants and what your audience wants can sometimes be very different conversations, and you have to be ready to have them.