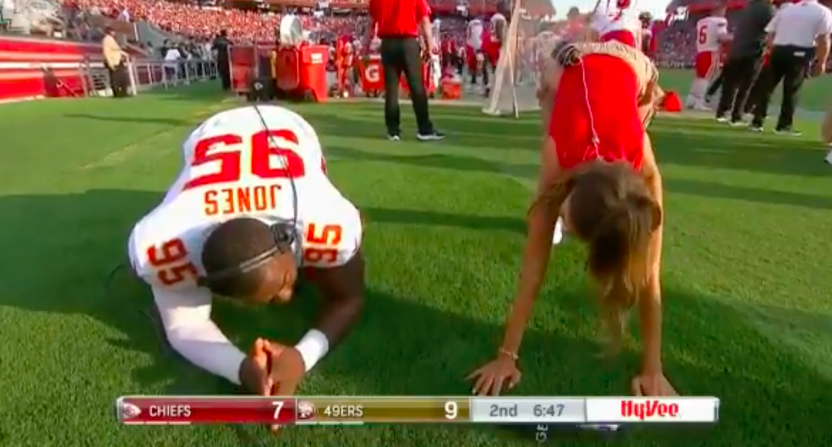 NFL preseason games are less about the outcomes on the field and more about preparing players for the grueling season ahead. That’s why it’s so important that NFL players are taking care of their bodies, working on their conditioning, and always stretching.

Kansas City Chiefs defensive lineman Chris Jones understands this. As he prepares to move from interior lineman to defensive end, he has incorporated yoga into his training routine as a way to get more flexible.

“I can do some positions I never thought I could do,” Jones said. “It was fun. I usually do Pilates during the offseason, but I started a little earlier this year for my flexibility. Bending on the edge is a little different than taking the turn [inside] so I wanted to be a little more flexible.”

During Saturday’s preseason game between the Chiefs and San Francisco 49ers, Jones not only had the chance to showcase his work on the field but also his burgeoning yoga practice on the sidelines. Jones was being interviewed by NFL Network sidelines reporter Kay Adams when she asked him to run them through his favorite pose. Jones, after a brief moment of concern, obliged.

Chris Jones is pure comedy ?
We get a sneak peak into his new yoga moves. #ChiefsKingdom pic.twitter.com/wiYpPIhNaf

“The Downward Dog. Put your hands down. The butt is up. And you just stretch. This is a calm position.”

“I thought this was Downward Dog.”

We’re gonna side with Adams here and say that what Jones is calling Downward Dog is really more like Plank. However, many yoga enthusiasts have to make modifications in order to enjoy their practice, so whatever works for Jones is good. And if ends up improving on his career-best numbers of 15.5 sacks in a season (2018), then Chiefs fans have yoga to partially thank for it.