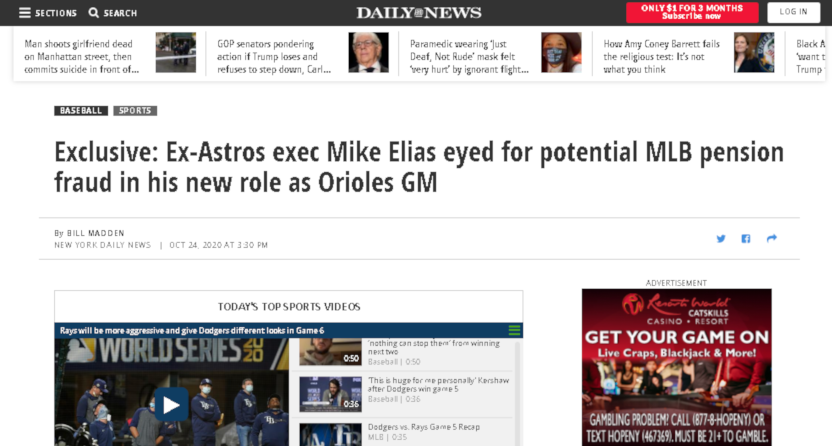 In the cycle of news organizations’ reports and organizations’ statements in response, much of what’s disputed is often a question of interpretation. But those disputes are more significant and interesting if a statement is actually specifically disputing what an outlet reported as fact. And that’s what’s going on with Major League Baseball’s statement issued Sunday night (via Nathan Ruiz of The Baltimore Sun) in response to a New York Daily News piece from Bill Madden that ran Saturday afternoon, titled “Exclusive: Ex-Astros exec Mike Elias eyed for potential MLB pension fraud in his new role as Orioles GM.” As of 5:30 p.m. Eastern Monday, that piece bears no updates or corrections, but MLB’s statement Saturday specifically says Madden’s central claim (that Elias is “facing his own investigation for potential pension fraud” for designating director of pitching Chris Holt as a participant in the pension plan) is not true. Here’s that statement:

“Major League Baseball is completely comfortable with the Orioles’ coaching designations for the 2020 season, which are not only consistent with the terms of the pension plan but were approved in advance by MLB and shared prior to the start of the season with representatives from the Major League Baseball Players Association.”

“The suggestion that there is an ongoing investigation that could result in discipline is simply false.”

Meanwhile, here’s what Madden specifically wrote on that front:

Elias may have escaped the Astros scandal, but he’s facing his own investigation for potential pension fraud. It could result in equally severe consequences.

…The Orioles pension scandal centers on Elias’ decision to give Holt benefits for which he was likely ineligible. Under the joint agreement between the MLB owners and the Players Association, only four coaches can be designated by the clubs for the pension plan, as well as the licensing money. Earlier this year, it was learned that Elias had designated Holt as one of the Orioles coaches to be placed on the plan, even though Holt is not listed as a coach for the Orioles, wasn’t with the team all year and was not even given a uniform number. He reportedly spent much of his time working in their minor league complex in Bowie, Md.

…When contacted by the Daily News, Steve Rodgers, a special assistant in the Players Association actively involved in all pension matters, confirmed the complaint about Holt and said the matter is presently in the hands of the pension committee lawyers. “All I can tell you,” Rogers said, “is that to my knowledge we’ve never had a case like this.”

In addition to earning a year on the MLB pension plan, which includes lucrative medical benefits and life insurance, Holt would also be entitled to a players’ licensing check from the sale of paraphernalia and merchandise (mostly online this year) and baseball cards. Those checks average annually between $40,000-$60,000, and are normally distributed to the players and coaches in spring training every year.

…If Elias knew the pension qualification rules — that you have to be a fulltime, uniformed coach, which Holt never was — and if he then went ahead anyway and deliberately tried to slip him through over other qualified Oriole coaches, according to a long time baseball lawyer with experience in the MLB pension plan, that could very well constitute pension fraud. “Assuming this is found to be fact,” the lawyer said, “we’re talking about people being engaged in pension fraud here, something that affects not just the coaches who potentially got screwed but all the baseball retirees. There is certainly going to have to be retribution and, I would think, significant discipline.”

What’s also interesting about this is that Madden didn’t cite any sources for his remarks about “the pension qualification rules.” And many baseball writers who have commented on this on Twitter, including ESPN’s Dan Szymborski and The Athletic’s Keith Law, have said that Madden got those rules wrong. Here’s Szymborski’s presentation of the qualification rules (from the third page of MLB’s official pension plan handbook, which unlike Madden, Szymborski linked):

The requirement for the coaches covered by the plan is that they're designated by the team. pic.twitter.com/c9GLnBdYyz

There is no mention of “uniform” in the entire 32 pages of that document. Perhaps there’s a “you have to be a fulltime, uniformed coach” requirement that Madden is citing buried somewhere else, but if so, it would appear incumbent on Madden and the NYDN to present that citation. Especially after MLB put out a statement refuting the premise of their article. Instead, Madden presented that as common knowledge with no citation.

It’s possible that that used to be a requirement at some point, but it sure doesn’t seem to be at the moment. And it probably shouldn’t be; it seems silly in 2020 to insist that only coaches who wear uniforms are eligible for this, especially as we get more and more organization-wide employees like Holt who don’t travel with the team but have vital roles of their own.

There is one further potential scenario that comes to mind here, and that’s that this is a fight between MLB and the MLBPA about pension eligibility that’s gone public. The only named source in Madden’s piece is Rogers, who works for the union as a special assistant-player services. And while Rogers’ quote itself isn’t all that inflammatory (“All I can tell you is that to my knowledge we’ve never had a case like this,”) he is cited with “confirmed the complaint” and “said the matter is presently in the hands of the pension committee lawyers.” And the MLBPA declined comment to Ruiz and the Sun, so they’re not outright disputing this the way MLB has.

Those statements from Rogers could be true even with MLB’s statement. MLB didn’t say that there was no complaint, and an investigation from pension committee lawyers could meet the definition of an investigation that isn’t going to result in discipline for the Orioles or Elias. It’s notable that the MLBPA does not appear to fully control the pension board; as per their FAQ, they have two reps on that six-member board, currently Cory Gearrin and Chris Iannetta.

So it is possible that Rogers and other MLBPA figures are trying to kick up a fuss about this under some belief that uniformed coaches matter more than coaches out of uniform, and that they brought this to the public through Madden. But if that’s the case, the presentation Madden gave the situation is highly dubious. He presented this as a clear case of rule-breaking without citing the rule, and as Elias flouting MLB rules and receiving possible punishment for it rather than doing something permissible that certain union figures may not like. If the union has a problem with Elias’ actions, they should say so, but they should do so outright through a full statement or a comment from MLBPA president Tony Clark rather than comments from Rogers presented as a much wider rule-breaking investigation.

In any case, the whole situation leaves a lot of questions for Madden and the Daily News. At the very least, it would seem that they should address MLB’s statement and the doubt it casts on Madden’s initial piece. If there is an actual rule that the designated coaches have to be in uniform, Madden and the Daily News should point to that. If there is proof of an actual investigation, they should provide that. And if there’s actually something to substantiate what they published and refute MLB’s statement, they should put that out there.

At the moment, the Daily News doesn’t appear to have put out anything responding to MLB’s statement, They also haven’t even updated their piece with MLB’s statement. And that sure makes it look like Madden wrote an entire piece saying that a GM was under investigation for pension fraud when there appears to be no investigation and no fraud, and when MLB themselves has said they’re fine with the Orioles’ designation of Holt. And that’s not a great look for the Daily News.