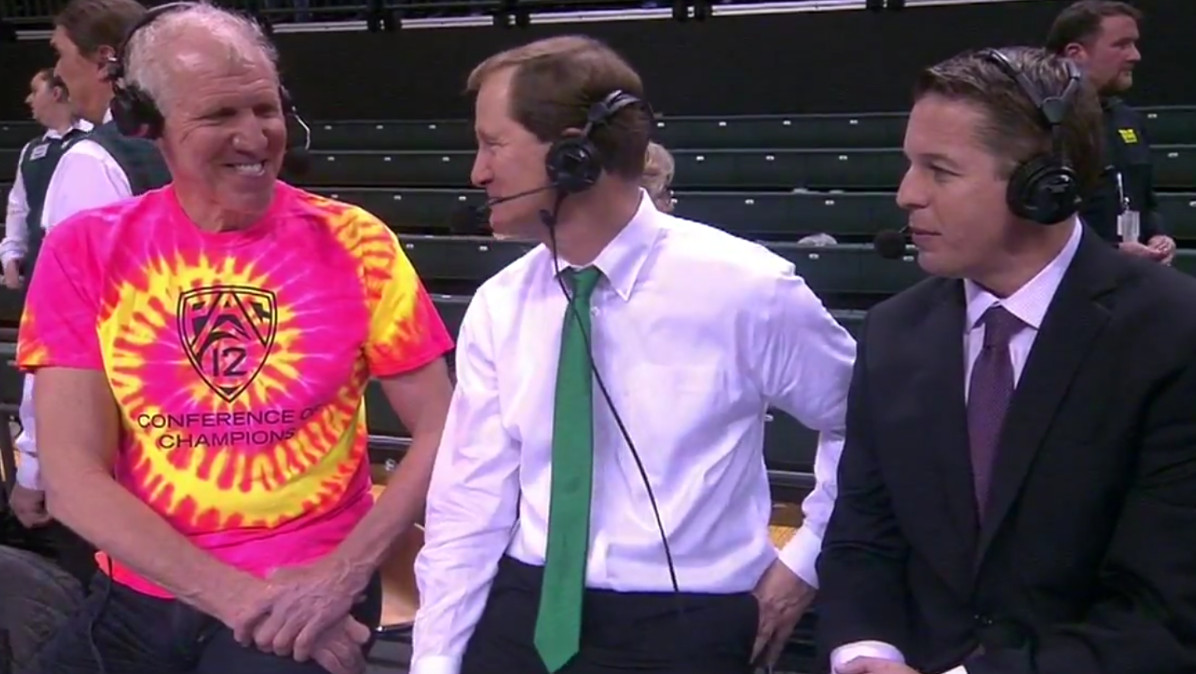 College basketball saw a major upset Wednesday night, with #21 Oregon (11-2 heading into this) knocking off #2 UCLA (13-0) 89-87, but that finish came in controversial fashion, and ESPN analyst Bill Walton was infuriated at a non-call in the final seconds.

Oregon rebounded a missed free throw and brought the ball down the court down by one with just eight seconds left, leading to Dillon Brooks nailing a contested three-pointer almost at the buzzer. However, that shot went through before time fully expired, giving UCLA time for one more play. Oregon’s bench didn’t realize that and some of them jumped onto the court in celebration as UCLA tried to inbound the ball:

Fans then stormed the court, and had to be told to go back to their seats. Oregon coach Dana Altman and his staff were some of the people waving them back:

You can also hear Walton start to vent there, saying “The Pac-12, the conference of champions, cannot allow this to happen. They’ve instituted new rules and procedures to prevent this!” Here’s where that conversation then wound up, with Walton discussing Brooks’ shot, and he and play-by-play announcer Roxy Bernstein talking about the possibility of a technical for fans storming the court too soon:

Bernstein then said “They’re going to put point-eight seconds back on the clock, it appears. Now, luckily for Oregon, the ball was not thrown in play, because if the ball had been thrown in play, then a technical could have been assessed.” Walton then quizzes him about this, and Bernstein returns to saying that the ball wasn’t put in play and that’s why a technical wasn’t called.

The problem is that the ball actually does seem to be thrown in play, as you can see in the top video, while Oregon bench players are still on the court. Here’s a screengrab of that from Matt Zemek:

You can see the ball in mid-flight, having just been passed by Welsh.

Oregon players on the court. pic.twitter.com/Nwo3T0XZVe

The commentators went on discussing the idea of the stoppage voiding the technical, though, with Walton saying “You can’t be serious. That wasn’t a disruption of the game?” and more.

The refs decided to put those eight-tenths of a second on the clock but not call the technical, leaving UCLA inbounding from their baseline, and their desperation heave didn’t work out. The crowd then stormed the court again, and Walton wrapped up with “The second court-storming in the same game. This is unacceptable. Congratulations to a great game by the Oregon Ducks. The safety and security of the players and the fans has got to be paramount, though.”

Walton and Bernstein then interviewed Altman after the game, but didn’t talk about the controversial non-call. However, we did get to see Walton show off his tie-dyed shirt, and he did end with a “What a night for the Conference of Champions” that felt a bit snarky.

Walton isn’t necessarily wrong here; there didn’t seem to be a clear explanation for why a technical wasn’t called when UCLA did try to inbound the ball (did the officials rule they couldn’t do that, or did they just miss it?), and there have been plenty of issues with consistent calls in these situations over the years. Also, analysts are expected to offer their thoughts on rules issues, right or wrong. There might be a case that Walton kept up the rules argument longer than necessary, though, and although he might well have made this same argument if the teams were reversed, his status as someone who played for UCLA and someone who’s been very positive about them recently will have some yelling “Bias!”

UCLA is awesome! They are so much fun, an absolute joy to watch. They pass the ball around & can score effortlessly pic.twitter.com/Ildaa2cwww

In the end, Walton wasn’t necessarily wrong here, but the amount of focus he put on this non-call is certainly going to get some criticism. Whether he was right or wrong, we saw both a bizarre on-field ending and an unusual commentary moment.