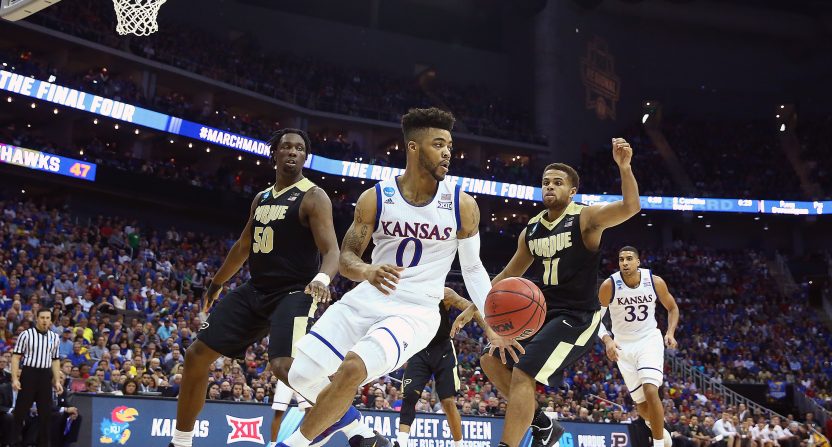 This year’s NCAA Tournament has not been all that exciting, by March Madness’ impossibly high standards. There has not been a single buzzer-beater—in fact most late-game offense has been kind of horrific. There has not been a magical Cinderella story—in fact no true mid-major team made the Sweet 16. There is also no historically good team or truly transcendent superstar. It’s all fairly generic.

And yet ratings for the tournament continue to be outstanding. Heading into the weekend’s action, this year’s March Madness was the most watched in 24 years, not (directly) counting the millions of people watching online.

And that trend apparently continued Thursday, as the NCAA has announced that the average overnight rating for the first four Sweet 16 games was up 9 percent from 2016. Live video streams on the March Madness Live app also rose substantially.

It’s not even like Thursday’s lineup was full of can’t-miss games. In fact, that first slate of Sweet 16 games pales in comparison to Friday’s, which features Kentucky, UCLA, North Carolina, Florida and Wisconsin—all traditional powers with huge followings—meaning we could be in for another night of huge ratings.

So what is driving this spike in viewership? Well, we don’t really know.

Part of it could be that, though we all enjoy upsets when they happen, we’re more likely to tune in to watch big-name schools playing big-name schools, so the lack of Cinderellas this year is actually a positive. It might also have to do with the accessibility of those online streams, which draw people in and get them to turn on the TV for close games. Or maybe it’s just that people have settled into the CBS/Turner Sports partnership and finally know how to find TruTV on their dials. Or it could simply be that college basketball is more popular than ever.

We have no cause to expect that ratings will fall off in the later rounds of the tournament, as long as numerous high-profile are teams still playing, so the viewership increases might keep coming… for whatever reason.