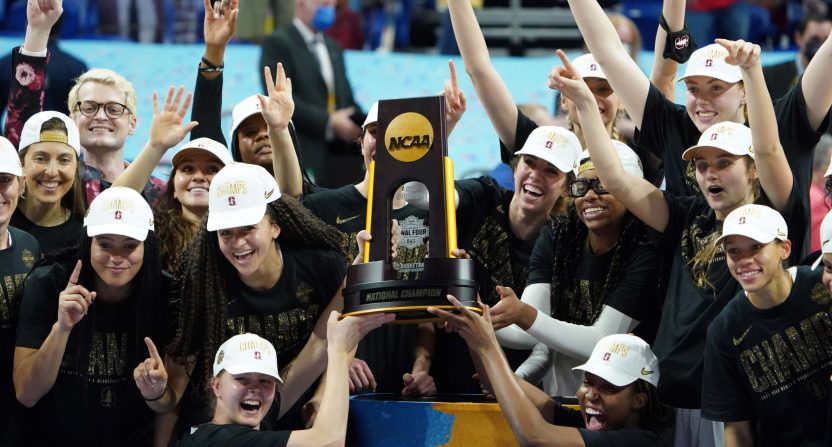 Let me put it on Twitter too cause this needs the attention pic.twitter.com/t0DWKL2YHR

In the wake of the reaction to that video, the NCAA briefly tried to tamp down the reality before admitted that the optics were not good, with NCAA President Mark Emmert saying “when you lay the men’s and women’s [Division I basketball] championships side by side, as has been made clear over the past weeks, it is pretty self-evident that we dropped the ball in supporting our women’s athletes, and we can’t do that.” The NCAA then tasked law firm Kaplan, Hecker, & Fink with doing an extensive gender equity review of both tournaments.

The law firm released their findings in the form of a 115-page report on Monday and, perhaps as expected, found that the NCAA had, amongst other things, “significantly undervaluing women’s basketball as an asset.”

However, per an independent analysis from Ed Desser cited in the report, the women’s tournament alone would be expected to fetch anywhere between $81 and $112 million per year in 2025 when the current ESPN expires. It’s hard to know for sure because, per the report, the current deal “likely does not reflect the true value of the women’s basketball championship broadcast rights.”

The report also suggests that the NCAA should consider hosting both Final Fours in a single location each year, if for no other reason than to cut down on costs and ensure that the quality of the facilities would be equal for both sides.

“There is also no question that planning and promoting combined Final Fours, rather than two separate events, would create significant efficiencies and cost-savings for the NCAA, its membership, and its partners,” read the report. “These cost savings would be even more significant if the NCAA  chose to also hold the Final Fours in the same venue. There would similarly be an advantage from a monitoring perspective since it would be a lot easier to determine whether hotel rooms, food, locker and weight room facilities, or signage are comparable if they are all in the same city.”

“The NCAA Board of Governors is wholly committed to an equitable experience among its championships. We know that has not always been the case and the instance of the Division I Women’s Basketball Championship is an important impetus for us to improve our championship experience so it is not repeated,” The NCAA responded to the report in a statement. “This report provides useful guidance to improve our championships. We have directed the NCAA president to act urgently to address any organizational issues. We have also called him to begin work this week with the three divisions and appropriate committees to outline next steps, develop recommendations and effectuate change. We will continue to review and process the recommendations in the gender equity report as we move forward to strengthen championships for all student-athletes.”

Will the NCAA do what it needs to do in the wake of this report to enact change? It’s hard to tell, and perhaps more importantly, very few people have any faith in the organization to do so. It literally says that in the report.

And of course, the impact of this report and the potential new TV rights discussion will ripple out beyond the way it affects players and coaches. An increase in visibility and financial commitment from broadcasting partners likely means that the announcers and analysts who cover the sport deserve more for their work as well.

This also confirms that every ESPN broadcaster doing the Women's Final Four has been underpaid given the real commercial value of this tournament.

The NCAA has nowhere to hide on the matter, so the ball is very much in their court now. ESPN also has to be aware that if they want to continue to be a partner and champion of the women’s tournament, they’re going to have to step up as well, or perhaps a competitor will. After all, the whole point here is that the sport and the women who play it deserve equality and opportunity, the same as the men.