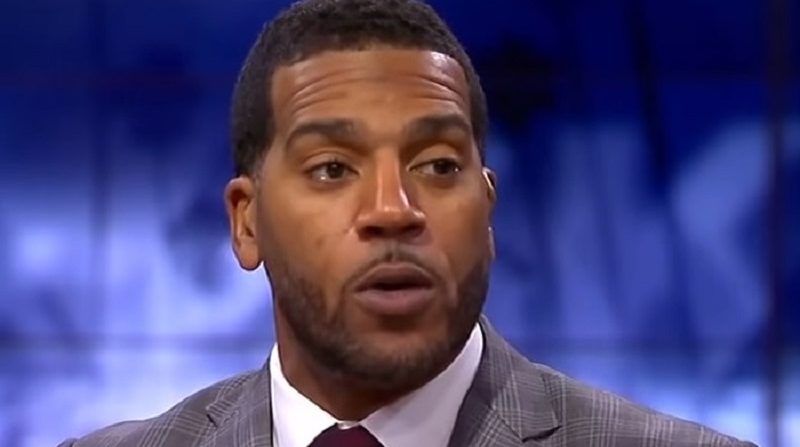 After years of calling the NCAA men’s basketball tournament on the radio and regular seasons on Fox and the Big Ten Network, Jim Jackson is finally getting the opportunity he’s been waiting for.

Jackson, 48, will make his TV tournament debut an analyst in Dayton on Wednesday night alongside Spero Dedes, Steve Smith, and Ros Gold-Onwude for the First Four doubleheader of N.C. Central-North Dakota State and Arizona State-St. John’s. He’ll then travel to Tulsa for games on Friday and Sunday, joining the crew of Brad Nessler, Steve Lavin and Evan Washburn for Northern Kentucky-Texas Tech, Arizona State/St. Johns-Buffalo, Georgia State-Houston and his alma mater Ohio State against Iowa State.

Jackson spent five years on March Madness duty for Westwood One, even calling a Final Four as a substitute with Kevin Kugler and Clark Kellogg one year when John Thompson II was ill.

“I know the excitement,” Jackson told Awful Announcing, “but TV is a little bit different. But I’m excited about it. It’s something I always imagined, envisioned doing as I’ve worked my way up the ladder.”

Jackson said he got the gig this year through what he termed persistence over time.

“Always asking about opportunities within the TNT/CBS networks about getting in,” he said. “And the timing just happened to have been perfect this year.”

Jackson was able to get his foot in the door calling NBA games for TNT and NBATV on Players Only, which likely helped his cause in getting in on the NCAA Tournament.

“So in life sometimes, things are just about timing, you know?” Jackson said. “Maybe four, five years ago I wouldn’t have been ready and wasn’t there. Now was the time. So I’m extremely excited about it.”

Obviously getting the extra reps the First Four games provide will help, but Jackson faces a unique set of circumstances in that he won’t just be preparing for six different games, but also two difference announce teams. Jackson covered St. John’s and Arizona State games this year for Fox, so he’s lucky in that he doesn’t have to do that much preparation for one of his First Four games on Wednesday. And one of those teams will advance to play against Buffalo in one Friday game Jackson will call. Despite that little advantage, Jackson is still going to be thrown off his routine a bit.

“When you add more [games] to the mix,” Jackson said, “you just have to elevate and you have to be real particular on not overloading yourself with too much information, but figuring out the key parts of that information that make sense and can fit for the broadcast.”

Jackson also has some familiarity with the analysts he’ll work with. He’s called games alongside Smith for BTN and with Lavin on Fox and FS1.

“The play-by-play may be the first time,” Jackson said, “but over the years you figure out ways to get in and out, allow the play-by-play to kind of do his thing and then bounce off of it. So for me, I don’t envision it being difficult.”

Jackson also won’t find the transition from radio to TV difficult either, he said. The fundamental difference between TV and radio for Jackson is the amount of legwork a radio play-by-play announcer has to do to set the scene, which means less time for the analyst to get their points across.

“On TV,” Jackson said, “you have a little bit more time as an analyst to break some things down, to telestrate, to illustrate plays that happened because the viewer actually sees what’s going on.”

One of Jackson’s frequent broadcast partners is Fox’s Gus Johnson, who’s had many legendary moments and memories calling March Madness buzzer-beaters and upsets during his tenure at CBS. But Jackson said that he and Johnson don’t really discuss his NCAA Tournament days that often.

“I think he’s very happy where he’s at, because he has a heavy workload with football and basketball,” Jackson said. “And it’s a long season for him. Of course I think he probably does miss it a little bit, but with transitions in life, things change and you move on. I know a lot of people who are avid college basketball fans that miss his voice. I could tell you that.”

While Johnson’s days calling the tournament have seemingly come and gone, Jackson’s days with Turner and CBS are just beginning. Jackson still remembers nearly 30 years ago when he was a freshman at Ohio State, being with his team on selection Sunday when his Buckeyes were sent to the NCAA Tournament and how that’s still one of his favorite collegiate moments.

“It was everything that anybody has ever told you,” Jackson said. “The excitement, the energy in the arena. From going from being selected, to practicing, to actually playing, you really can’t put it into words. Because it’s a feeling like no other as a college basketball player.”

And now for the first time on television, Jackson will try to channel what those players and teams are feeling on the court to March Madness viewers tuning in from across the country and around the world.