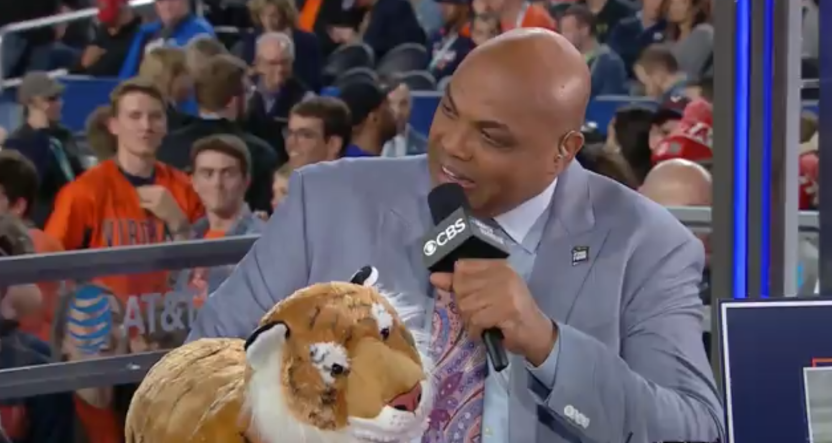 Turner Sports analyst Charles Barkley has long been proud of playing for the Auburn Tigers, and we’ve seen that in their run through the NCAA men’s basketball tournament. In the first round, Barkley’s roller coaster of emotions to the Auburn-New Mexico State ending was caught on camera, and he’s had a lot of positive things to say about the Tigers since then. On the CBS/Turner halftime show Saturday during the Final Four game between Auburn and Virginia, Barkley was referring to the Tigers as “we” even more than usual (to say nothing of the stuffed tiger and Auburn flag on his part of the desk), and that led to some mockery from host Ernie Johnson and fellow analyst Kenny Smith. Here’s the first part of this exchange, which came near the end of the halftime show:

Barkley says “If we could get two or three threes in a row, we could get some distance,” and Johnson leans back in his chair. Barkley goes on with “If we don’t make threes, the way Virginia plays, walking it, it’s going to be a one-possession game, whoever gets it last.” Johnson then says “And if you’re just joining us and you keep hearing the word ‘we,’ that would be Auburn because of Chuck and his allegiance to the Auburn Tigers.” Smith then points out that Virginia has hit as many threes as Auburn, and that leads to this next clip:

There, Barkley says “That’s a great point you made. If we got the same number of threes as Virginia, we’re not going to win.” Johnson wraps this up with “Okay, there you go. And again, there’s that we again,” and Smith chimes in with “He’s French!” before Johnson finishes with “and WE will be back with more on AT&T at the Half.”

“We” usage from commentators is definitely a complaint many viewers raise from time to time, but it should be pretty expected from Barkley, who isn’t your typical analyst and has long worn that allegiance on his sleeve. Also, he’s on the desk rather than calling the game, so it’s not like viewers are hearing this on every play. But it’s still pretty funny to see how Johnson and Smith ribbed Barkley here, with Smith’s “We/oui” pun being particularly outstanding.