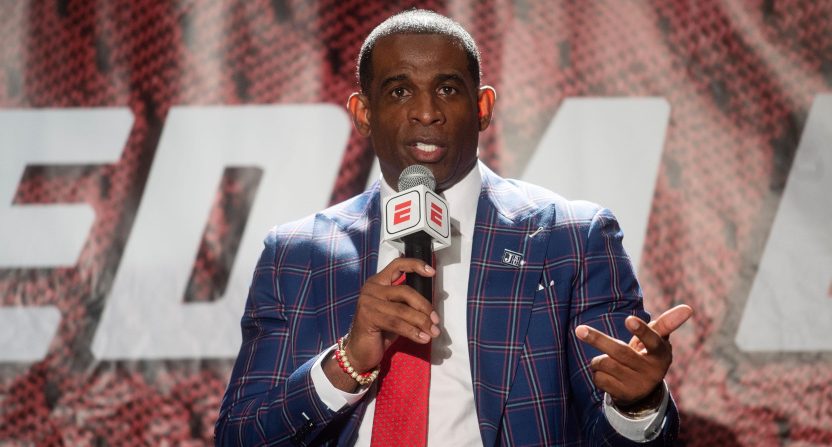 One of the more interesting figures in FCS football is noted former NFL player and analyst Deion Sanders, who fulfilled his long-discussed plan to be a college head coach by taking over as Jackson State’s head coach last September (after the school issued repeated denials that they were hiring him). He led the Tigers to a 4-3 season this spring (with a date shift and a season shortening thanks to the COVID-19 pandemic) and made a lot of offseason headlines with satellite camps and NIL deals, both bolstered by his wide network of famous contacts. Most recently, he sparked comment with his actions at a SWAC Football Media Day event Tuesday, where he reportedly exited after being addressed by his first name by Clarion Ledger (a daily newspaper based in Jackson, MS) reporter Nick Suss. Here’s a writeup on that from Suss’ Clarion Ledger colleague Langston Newcombe:

The Pro Football Hall of Fame cornerback and second-year coach demanded that reporters shouldn’t call him by his first name before walking out of a SWAC Media Day event at the Sheraton-Birmingham on Tuesday.

“If you call Nick (Saban), Nick, you’ll get cussed out on the spot, so don’t do that to me,” Sanders later added. “Treat me like Nick.”

As Suss told Newcombe, though, he did treat Sanders the way he treats Saban.

“When I interview people, I call them by their first name,” Suss said. “Whether it’s someone I’ve been working with for years or someone I’m talking to for the first time. This is true of the coaches and players on the Ole Miss beat, the coaches and players at Mississippi State and Southern Miss when I help out covering their teams and, as recently as January, even Sanders, too.”

Suss has referred to Saban and the football coach on his Ole Miss beat, Lane Kiffin, by their first names, along with the Bulldogs’ national championship baseball coach, Chris Lemonis.

Update: Meanwhile, Sanders later disputed that he “walked out”:

Never walked out of media day. I prolonged my time to answer another question & the person thought it was cute to address me the way he did so I dropped the call & went to the next outlet. Please don’t allow a fool to fool u because then nobody would truly know who the fool is. https://t.co/csbTRNgJvd

There are a couple of intertwined issues here. The first is that it’s not universally settled whether reporters should address coaches by first names or by “Coach” (or “Coach [Lastname]”); different reporters and different media outlets take different paths there. And both of those paths have taken criticism; some see “Coach” as too deferential and respectful, while others feel calling a coach by their first name isn’t appropriate (especially when it’s a coach the reporter doesn’t have a previous relationship with, something that happens a fair bit with media days or with coaches from the opponent of the team the reporter usually covers). This also isn’t really a settled debate in other areas of journalism; high-level government officials, military leaders, judges, medical doctors, and academics are sometimes addressed by their title, especially if it’s in a situation related to that role, but that’s not universally done (and it’s usually not done for lower-level government officials, or for lawyers, or for various other people with professional titles).

The second issue is whether there’s less respect given to Sanders in press conferences than Saban in terms of how he’s addressed. On the level of Suss himself, the specific flashpoint here, that doesn’t seem true; that article notes that Suss has called those other coaches by their first names. However, it’s possible to at least see where Sanders is coming from here. While Suss may call Saban “Nick,” and while many others do as well, past televised press conferences make it seem like there are a fair bit of people who call him “Coach” or “Coach Saban.” It seems likely those numbers are higher than the numbers that call Sanders “Coach” or “Coach Sanders.” And it’s possible to understand why Sanders might take being called “Deion” rather than “Coach” as a sign of disrespect.

It’s also worth discussing the particular context here of Sanders and respect (or a lack thereof) for him. There aren’t a lot of minority head coaches at the NCAA level; there were just 13 out of 130 FBS head jobs filled by Black coaches as of last December, and just eight Black coaches as Power Five head coaches as of May. It’s worth paying attention to how minority coaches are treated relative to white coaches. And if a media member was calling Saban “Coach” and Sanders “Deion,” that would raise questions about that media member and about how they’re doing their job. However, that hasn’t yet been shown to be the case for any particular person, especially Suss. Sanders is probably right that Saban is addressed with more respect on aggregate, though, and that’s not great as an overall look for the media; both of them hold the same job (albeit at different programs and levels), and going with a title for one and no title for the other seems problematic.

And, yes, there’s a counterargument that Sanders doesn’t deserve as much respect as Saban, based on solely his college football record. Sanders has coached seven games at the FCS level and gone 4-3, versus Saban’s 256–65–1 at the FBS level. Saban obviously has a more impressive coaching history. But that’s then arguing that there’s a particular threshold necessary to earn the “Coach” mode of address, and setting a definition for that threshold would be quite difficult. It seems better to say that all NCAA head coaches deserve equivalent modes of address at a press conference, regardless of what their record is. That doesn’t solve whether that should be “Coach” or “First Name,” but at least if an outlet or reporter is internally consistent with that decision, that’s fair to the different people they’re covering.

The problem with Sanders’ actions here is that the reaction seems disproportional to the incident, especially considering that Suss in particular has said that he’s used this mode of address with numerous other coaches, including Saban. (And that can presumably be verified.) And Sanders’ “If you call Nick (Saban), Nick, you’ll get cussed out on the spot, so don’t do that to me” line just isn’t true; Saban hasn’t done that, presumably because he cares more about things beyond whether he gets the “Coach” title in a press conference. And Sanders shouldn’t be making up things about how another coach would respond, especially when there’s plenty of evidence that that coach doesn’t respond that way.

Of course, it’s not really fair to expect Sanders to know Suss’ own history of addressing coaches. But it’s also not really fair for him to assume that the lack of a “Coach” title is disrespect for him versus other coaches. And it’s also not great for him to insist on a “Coach” title. He can say that he prefers that if he wants, but trying to force media to address you in a certain way isn’t a terrific look for a coach.

But Sanders did still make one point here. It’s absolutely worth thinking about the way media members address Saban versus how they address other coaches, especially minorities. There shouldn’t be a discrepancy there. Maybe there isn’t for individual journalists, but it’s notable that Sanders at least perceives there to be one on aggregate. And it’s worth pointing out to journalists covering these coaches that whichever way you’re going to go on “Coach” versus “First Name,” it’s important to be consistent.

All in all, this seems like something where Sanders’ response was out of proportion to the event, and where his response wasn’t the best approach. Now, instead of stories about his team, there are stories about his actions at Media Day. And now Suss and his paper have been dragged into a national story (not a preferred thing for most reporters) despite being internally consistent with how he treated both Saban and Sanders (at least by his own account), and that’s unfortunate. And storming out of a press conference doesn’t ever seem to solve much. But Sanders did spark a conversation about how coaches are addressed, and maybe something will come out of that.