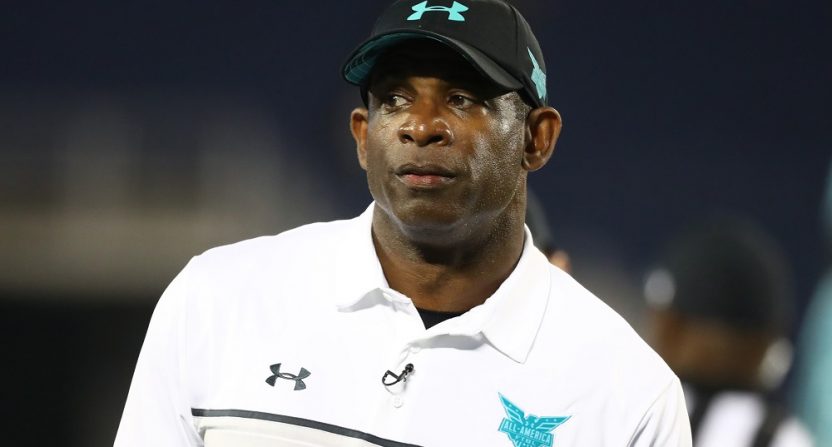 During an appearance on The Dan Patrick Show Tuesday, the Hall of Fame cornerback didn’t hesitate when asked if he was serious about taking the Florida State head coaching job. Sanders was mentioned as a candidate for the gig last November after the Seminoles had fired Willie Taggart.

“Yes,” Sanders told Patrick. “I’m gonna be a head coach in college football next year.” When asked where that would be, Sanders responded “Somewhere.”

.@DeionSanders made it clear today that he is serious about being a college football head coach and said he'll be coaching somewhere next year pic.twitter.com/1tFN9zf1Jk

The former Florida State star didn’t elaborate when asked why an agreement to become the Seminoles’ next head coach didn’t work out. However, he insists discussions got “interesting,” and his smile implied that this wasn’t a frivolous offer to a famous alum. (The position eventually went to Mike Norvell, who left Memphis after four seasons for Tallahassee.)

Sanders, 52, also revealed that he talked to another school about becoming its head football coach, with the process going to a second interview. He didn’t reveal the program with which he spoke. But Sanders insisted that he would be a coach in college football — and not an assistant coach. Even if it meant coaching the in-state rival Miami Hurricanes or a school that played in a cold-weather climate.

Coaching does appear to be a passion for the nine-time All-Pro (first-team) honoree. Sanders was the head coach at the Prime Prep Academy charter school from 2012 to 2015, until the school closed due to financial difficulties. He’s also the offensive coordinator at Trinity Christian School in Cedar Hill, Texas, where his sons attend and play football. And earlier this year, Sanders coached one of the teams in the Under Armour All-America Game.

Sure, Sanders would almost certainly be hired for his name recognition and high profile. But he apparently intends to be much more than a figurehead wherever he may up. When Patrick asked him what sort of offense he would run, Sanders said it would be a wide-open scheme that gives the ball to playmakers and lets them utilize their skills. (The Michigan football fan writing this article would love Sanders to share that philosophy with coach Jim Harbaugh. However, this is not an endorsement of Deion Sanders for Michigan football coach.)

So let the guessing game begin. Keep your eye on college football, coaches who may be in trouble, jobs that may be opening up, and athletic directors with stars in their eyes next season to see if Sanders could somehow be a fit. Is Neon Deion willing to take a lower-profile job in an obscure part of the country or does he prefer the prestige of taking over a big-name program despite his lack of college coaching experience?