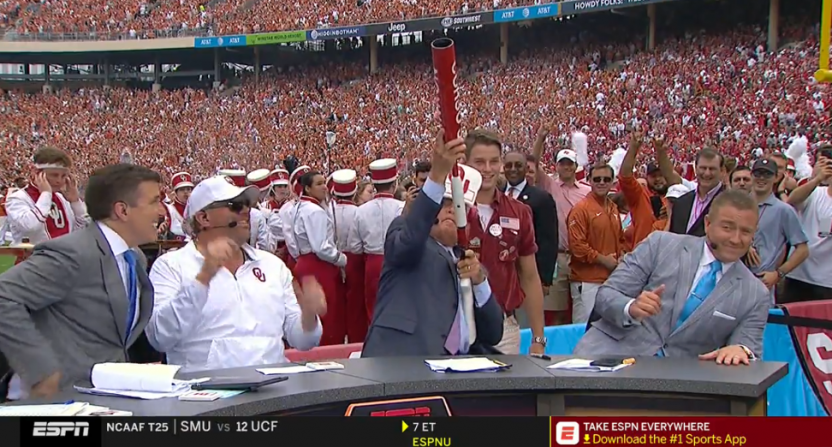 College football has me all

It’s Red River Showdown Saturday, so saddle up and enjoy all the delectable deep-fried delicacies the deep south has to offer. Seriously, shove them in your mouth crater because today can’t get better than it is now. Your team didn’t lose yet, and I’ll call 911 in a bit.

This neutral-site show is remarkably, well, neutral. Both schools are roughly 195 miles away and it’s just south of a 3-hour journey. So despite being in Texas, it’s actually a level playing field. What a concept. I’m looking at you, Washington v. Auburn in Atlanta.

But let’s talk about this game, well, actually the one that occurred about 20 years ago. Specifically the Oklahoma team that contained coach Mike Leach and the alleged Cotton Bowl Caper, which ESPN’s Jake Trotter explored in a story this week. O-U don’t know about that?

Let’s travel back to the great year of 1999. Mike Leach, actual insane person, is the offensive coordinator for Oklahoma. In a moment of inspiration, he instructs an assistant to drop a decoy game script on the field. A Texas grad assistant intercepts the playsheet and promptly gives it to the people in charge. Texas thinks they struck oil — football-wise — and they adjust their plays accordingly. Oklahoma takes a 17-0 lead before the Texas coaches realize they’ve been duped. In the end, Texas won, but what a hell of a first act by Mike Leach.

Anyhoo. Let’s talk about this week:

Best Trivia: Which game features the second-oldest head coach vs. the youngest head coach? Think about it, and I’ll give you the answer if you finish this thing.

Worst Sign
Imma need to see a decrease in the “Venmo me beer money” signs. I can’t imagine this actually works.

You Had One Job Winner
Corso has incorrectly picked the winner in an Oklahoma game since basically the Old Testament. Was he right this time?

Corso’s Headgear Pick
Corso (and everyone else) went full-on Sooner.