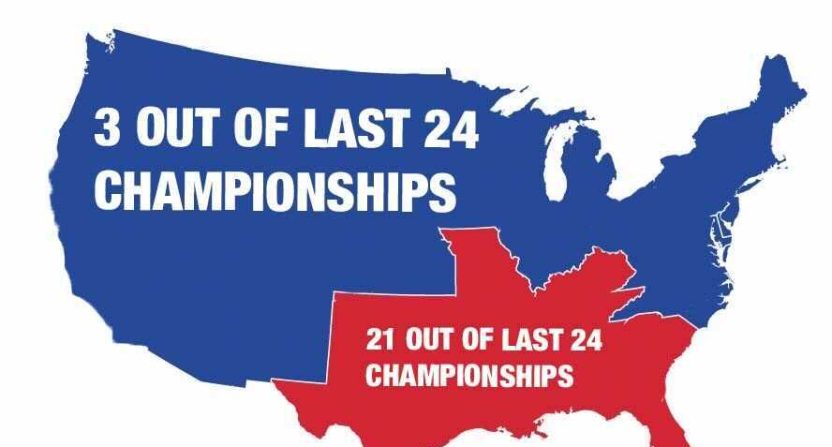 A little over a year ago, I published my second installment of The Electoral Map Of Football, an attempt by me to figure out the national electoral preference of football between the NFL and college football. By flipping North Carolina and Virginia to college football states, the result was closer than you’d imagine and you’d think indicate that college football is perhaps narrowing the gap with the NFL in terms of interest.

But of late, the ratings have presented a bit of different picture and particularly the ratings for the College Football Playoff, which has largely been dominated by the SEC and to a much greatest extent to the SEC’s footprint (states with SEC teams in them). Looking at how things have gone in the playoff era you begin to see a concerning trend.

The Pac 12 hasn’t appeared in the four-team playoff the last five years.

The Big 12 has only had one school make the playoff (Oklahoma, who is leaving for the SEC) and has never won a game in the playoffs’ eight-year existence.

The Big Ten and ACC have had some success making the playoff regularly, but in eight years both conferences have only had one school actually win a game in the playoff.

Meanwhile, the SEC has won 5 of the 8 playoffs and has had two all-SEC National Championship games. A breakdown of the 24 playoff wins by conference looks like this:

Additionally, Notre Dame is 0-2 in the playoff.

Going beyond the playoff era further points to the growing regionalization of the sport. If we look at the 24 years we’ve had the playoff or the BCS, you continue to see more of the same. In those 24 years:

Focusing a bit more on the SEC footprint, 21 of the last 24 championships come from an area of the country that represents just 160 of 538 votes on the electoral map. Ohio State’s two national championships and USC’s one represent 71 electoral votes although I think most would agree that the fandom for any California college football team is culturally a bit more muted than other parts of the country even in an upswing. 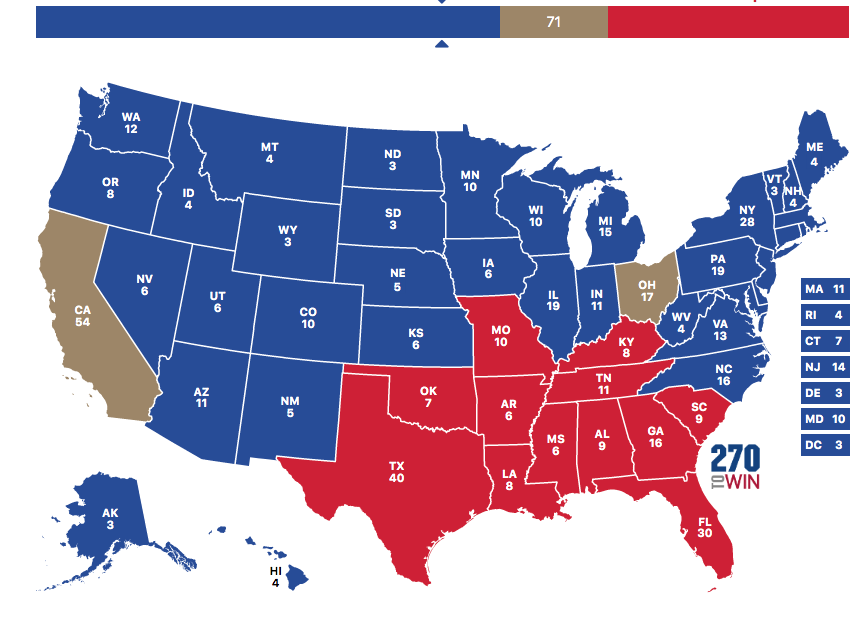 Now if you’re thinking all of this is a bunch of smoke and mirrors to make a point, let’s look at the same map for the 24 years prior to the BCS era. Most glaring is the gold states signifying states who had won a title in that 24-year span outside of the South. That’s a MUCH different map than the one above. 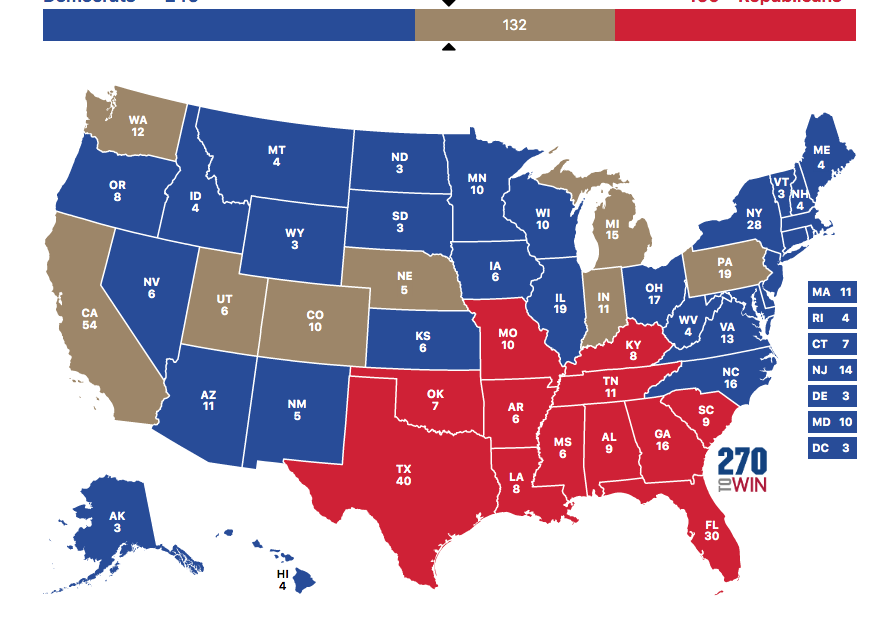 I think the last stat is probably the most important. The number of championships outside of the south was at a healthy 45% in the 24 years leading up to the BCS. It was nearly a coin flip if the college football national champion would come out of the South.

Since the start of the BCS, that number is far from a coinflip as it has fallen to 12.5% in the 24 years since. It’s easy to see why with that level of recent success in the south the sport is thriving there in terms of interest, ratings, and general fandom. Unfortunately, the lesser amount of success and excitement outside the region assuredly plays a role in deflating ratings, attendance, and general participation and interest in the sport outside of the south.

Looking at that 24 year period before the BCS, you had fans of schools like Penn State, Pitt, Notre Dame, Washington, Colorado, BYU, Nebraska, and Michigan that probably prioritized following their team and the sport a lot more than today simply because, in their lifetime, their team had won a championship.  Going back a bit further and you can add Michigan State, Iowa, Minnesota, Syracuse, and Maryland to that list. But when you go a quarter of a century without that higher watermark of relevancy, some of that regional interest begins to fade away.

Of all of those pre BCS champions I just mentioned, how many of those schools do you think will win a championship in the next 24 years? How many of these schools’ ceilings have been recalibrated where the idea of winning a national championship is just no longer realistic?

If you were to pick two teams outside of the SEC footprint to win a championship in the next 24 years, you’d probably pick the same two that did it the last 24 years in Ohio State and USC. You could argue Oregon as a team poised for similar relevance going but it’s harder to make that case given their last two coaches bolted for jobs at Miami and Florida State.

While it was encouraging to see Cincinnati and Michigan make the playoff, the lack of competitiveness of those games (joining the likes of Washington, Michigan State, and Notre Dame when matched up against an SEC team in the playoff) plus the possibility that both head coaches may be on borrowed time at those schools, doesn’t exactly point to any type of regional football market correction coming anytime soon.

ESPN is the biggest winner in Oklahoma and Texas joining the SEC, and reportedly “has been right in the middle of it”

I’m not going to get too into weeds into why this is happening or what can be done. That’s an equally long post and one I’m not the best person to write it. But what I do think is important to think about is that for many years, a lot of us tried to ignore this as a short-term trend. The BCS was too small. Nick Saban is too good. ESPN has an SEC bias. Nebraska, Michigan, USC, and Notre Dame are just one hire away from being right back there.

Sure. There are portions of truth to all of those things. But how much of that is scapegoating the reality of a very real trend of regionalization of college football? How long does a perceived short-term new normal become the permanent new reality? When only a portion of the country enjoys the highs of a sport, it shrinks the audience elsewhere because it reaffirms the idea of a lower level of realistic achievement for your rooting interest. As elite coaches and top-tier recruits migrate towards the South the regional imbalance grows as does the level of interest in the sport.

You can actually feel and see college football slipping in terms of national relevance. Daytime ESPN has pushed college football further away from the constantly discussed NFL and the NBA and more towards the afterthoughts of MLB and the NHL. ESPN has largely grown comfortable ceding the majority of news-breaking of the sport to other outlets. They’ve crunched the numbers and know that for large parts of the country, college football is much more of an afterthought than what it used to be and the NBA and the NFL are surer bets more worthy of airtime. Simply put, ESPN would rather talk NBA and NFL all day because that’s the preference of viewers in New York, Chicago, Los Angeles, Philadelphia, DC, Phoenix, Denver, the Bay Area, and Boston. If college football fans don’t want the NFL and NBA jammed down their throat, most of them can just flip over to the conference network of their choosing with ESPN well-positioned by owning the networks servicing fans in the south with the SEC Network and ACC Network.

Meanwhile, the three power conferences with TV deals coming up and unsure of their future prospects are the Big Ten, Big 12, and the Pac 12, soon to be representing those remaining 3 of the last 24 championships. While the Big Ten is in a good position for a new deal, the Big 12 and Pac 12 are seemingly precarious positions between not much recent championship or playoff success and at a severe rating disadvantage. It’s very plausible one or both of the conferences may soon find themselves playing a majority of their games on a streaming service like Amazon Prime, Apple TV+, or ESPN+, something that will certainly not do any favors with fans or recruits.

Does playoff expansion help or hurt this trend? The BCS seemingly did away with whatever balance college football had settled into. Realignment and the playoff only accelerated the trend of southern regionalization of the sport. Seeing more teams from around the country in the playoff certainly seems like a good thing but it also opens up the door for more final fours with all southern teams, something we already saw in 2018 with Georgia, Alabama, Oklahoma, and Clemson making the playoff (Oklahoma, then in the Big 12).

Between another round of realignment, the transfer portal, NIL, and playoff expansion, we’re entering a new very different chapter of college football. These added variables have the ability to further tilt success towards the near southern monopoly over the sport. Perhaps we’ll see the opposite play out and these change agents will revert back some of the parity the sport enjoyed before the BCS.

Ultimately, college football’s growing regional imbalance of interest and success doesn’t register that much to stakeholders within the sport because it has yet to affect the bottom line. Playoff expansion actually will probably push back any real concern over this for another decade given the amount of money it will inject into the sport. That said, it’s not hard to envision a world in the not so distant future where there are no more games to add to the playoff, conferences are too fat to expand any further, there are no more conference networks to launch, and nobody tunes in to find the stream of a lowly regular-season matchup played in a half-empty stadium between two teams that haven’t finished in the top five in 50 years. For many pockets of the country, this is already a reality and one that’s coming to many states and schools in the not-so-distant future.