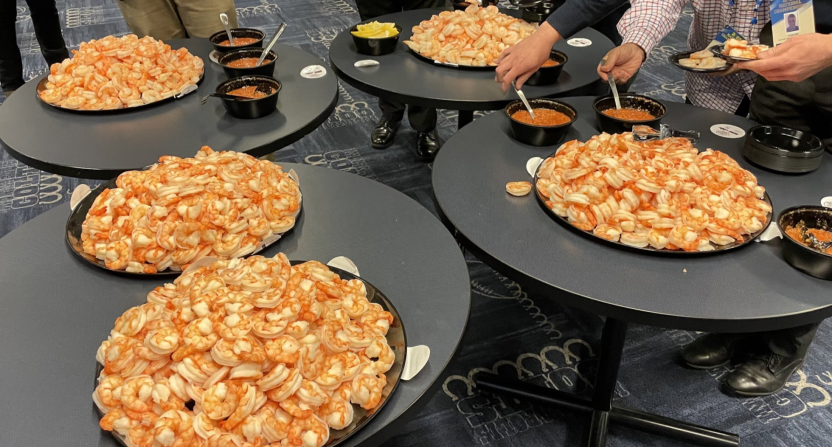 The College Football Playoff National Championship will determine whether or not the Alabama Crimson Tide or Georgia Bulldogs will spend the evening celebrating as the champions. For the sportswriters covering the game in Lucas Oil Stadium in Indianapolis, Indiana, they have already received their own championship prize in the form of humungous plates of shrimp.

While you might not think of seafood when you think of Indianapolis, St. Elmo Steak House is a local institution known for their world-famous St. Elmo Shrimp Cocktail, which they’ve been serving since 1902. A hefty collection of giant black tiger shrimp served with their signature spicy cocktail sauce, it’s considered required eating for many who pass through town.

Unfortunately, many of the sportswriters in town to cover the big game might not have time to make a stop at St. Elmo. However, the good news is that the restaurant brought the shrimp cocktails to them.

If we know anything about sportswriters, it’s that they love three things. Bruce Springsteen, working soda machines, and free food. And those who were on hand and looking for a break from the field-goal fest they’d been witnessing were more than happy to let everyone know they were filling up on as many cooked crustaceans as they could.

The get-off from sportswriters when they announced there’s St Elmo’s shrimp cocktail in the press box rivals anything we’ve seen from Will Anderson tonight pic.twitter.com/myIKoEU6ga

If you put that shrimp in your stomach right now, what happens next is legally your own fault. https://t.co/QWg71ssjKh

St. Elmo shrimp cocktail is the halftime meal in the press box. pic.twitter.com/S9ypi8NuJG

Here’s @bykevinclark with his St. Elmo’s shrimp cocktail with a heavy serving of cocktail sauce. He’s currently tearing up. ? pic.twitter.com/I3BLeJR41Y

The cocktail sauce NO JOKE! I’m tearing up it’s so hot ? #CFBPlayoff pic.twitter.com/5h7YDjOIKb

Of course, not everyone thought it was the amazing deal that it seemed to be for so many hungry college football reporters.

I sure hope heaven isn’t the opportunity to eat room-temp shrimp in Indiana during a pandemic https://t.co/ID9yu8TJfY

Hopefully, we’ll find out who ate the most shrimp, which is obviously the most important stat to come out of tonight’s big game.