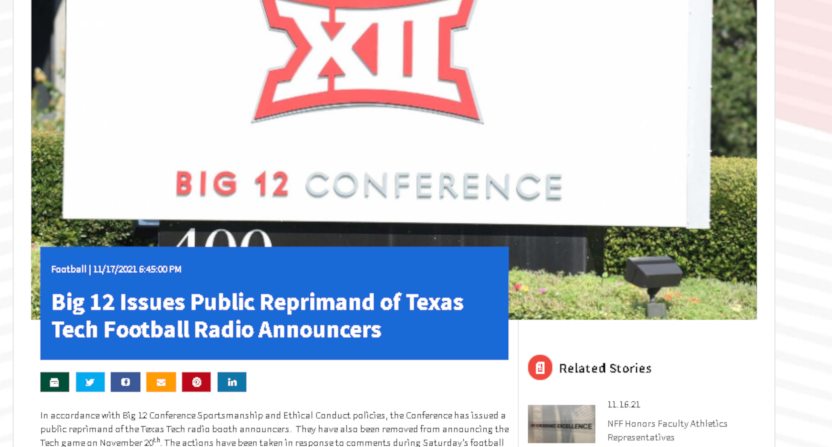 We’ve sometimes seen individual colleges ban particular media outlets, and we’ve even seen schools suspend their own radio announcers, but a conference banning the official radio booth of one of their schools feels new. That’s what the Big 12 announced Wednesday, though, saying that the normal Texas Tech football radio announcers (Brian Jensen and John Harris) are banned from calling this week’s Texas Tech-Oklahoma State game:

In accordance with Big 12 Conference Sportsmanship and Ethical Conduct policies, the Conference has issued a public reprimand of the Texas Tech radio booth announcers. They have also been removed from announcing the Tech game on November 20th. The actions have been taken in response to comments during Saturday’s football game broadcast against Iowa State.

“I understand the roles of the play-by-play and color analyst,” commented Commissioner Bob Bowlsby. “However as University representatives they also have an obligation to adhere to Conference policy regarding comments about game officials. The comments by the Red Raider Radio Network booth announcers were contrary to expected levels of respect and professionalism. Questioning the integrity of Conference officials and specifically calling out members of the officiating crew is well beyond appropriate and permissible behavior.”

Update: Here are some of what appear to be the comments in question:

OK. As it turns out I *do* have the Texas Tech radio call that got their announcers suspended by the Big 12. Part one: pic.twitter.com/TSH2NivQCq

I found their Radio Booth Camera Feed and the spot where it starts, at 4:36:40https://t.co/3LN4NOoICs

We previously spotlighted Jensen and Harris for their excited and excellent call of the Red Raiders’ 62-yard game-winning field goal in that game Saturday against Iowa State. Here’s how Jensen and Harris called the end of that game (Jensen’s reaction is seen at the top of this post):

There are a couple of things that are unusual about this. It’s notable that the Big 12 statement includes no comment from Texas Tech; if this had been even a conference-instigated decision that Texas Tech reluctantly got on board with, you’d expect a comment from the athletic director along the lines of “We apologize and will be better.” The conference statement has none of that.  And Texas Tech has no mention of this on their athletics site (as of 10:10 p.m. Eastern), and they listed Jensen, Harris, Level and Pitts as on their radio call for Oklahoma State in a preview of that game they published Tuesday.

It’s also notable that this statement is extremely vague about what was said, and does not explain how this goes beyond a usual college football team radio broadcast. “Questioning the integrity of Conference officials and specifically calling out members of the officiating crew” may be “well beyond appropriate and permissible behavior” in Bowlsby’s mind, but it happens an awful lot on team broadcasts in many sports, and maybe especially in college football. (And while this is a much different situation, it’s interesting that this is the second time this year the Big 12 conference office has gotten into a dustup with a particular media outlet; they were previously seen sending ESPN a cease-and-desist over ESPN’s alleged efforts to poach teams from the conference, an accusation ESPN denies.) And the comments suggesting the officials are in favor of the other team in these videos sure don’t sound that different from what’s heard on a ton of team broadcasts every week.

It’s possible that the booth here did something that really was “well beyond appropriate and permissible behavior.” But if that’s the case, the Big 12 should fully cite that rather than just throwing out these vague claims. They also should fully cite what “Conference policy regarding comments about game officials” actually is; have they banned all officiating criticism (and if so, good luck finding announcers), or just specific kinds of criticism? And also, if something “well beyond appropriate and permissible behavior” happened, you’d expect the school to be consulted about this one-game ban, and to put forth some form of apology to join the conference statement. That school apology, at the very least, did not happen here. So this is going to be a story to watch.