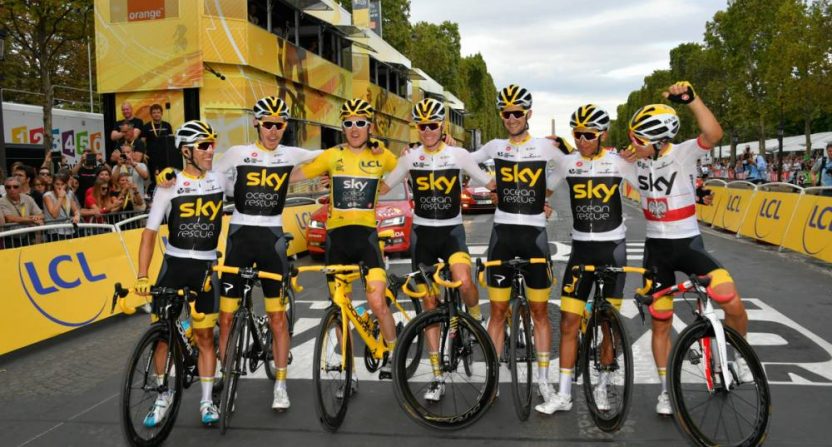 There are many facets to Fox’s selling of assets to Disney and Comcast. While Disney focused on buying the domestic side of Fox, Comcast went for the international side, and while Fox tried to buy Sky plc outright, Comcast bought Sky which included Fox’s 39 percent share of the European based broadcaster.

There are a lot of moving parts to Comcast’s takeover but one notable asset was the Team Sky cycling team. Sky not only sponsors the team but they formed the team in 2009 and have owned them ever since.

The team quickly became one of the top teams in the world and has won some of the top cycling races in the world, winning the Tour de France six times, the Vuelta a España once and Giro d’Italia once.

Fears of the future of the team were subsided as those inside the company were confident in remaining in cycling. Cycling Weekly reports that new Sky CEO Jeremy Darroch supported the same vision to cycling that the Murdoch’s had when they formed the team.

Neither Comcast or Sky plc have officially said they were keeping the team but I wouldn’t be surprised if they kept going. Sky seems to have no problem with supporting the team and NBC broadcasts a lot of cycling in the United States, including the Tour de France so on the surface, it’s a win-win.

But this raises a concern. Now that Comcast technically now owns and sponsors not only a pro cycling team but the top cycling team, and Comcast has the TV rights to the top cycling events for the United States, how is this not a conflict of interest?

Sky Sports covers cycling but the majority of the broadcasts are handled by other networks. For instance, Eurosport broadcasts the majority of the races while ITV does the Tour de France in the UK. But in the United States, NBC broadcasts the big races and even other single stage and domestic races for either NBCSN, the Olympic Channel or NBC Sports Gold. Sometimes, NBC takes the world feed and plays that but they produce the Tour de France and send a broadcast crew to France.

Comcast now not only produces and broadcasts cycling but they now own the top team in the sport. Will the corporation be able to separate the two to be fair and impartial?