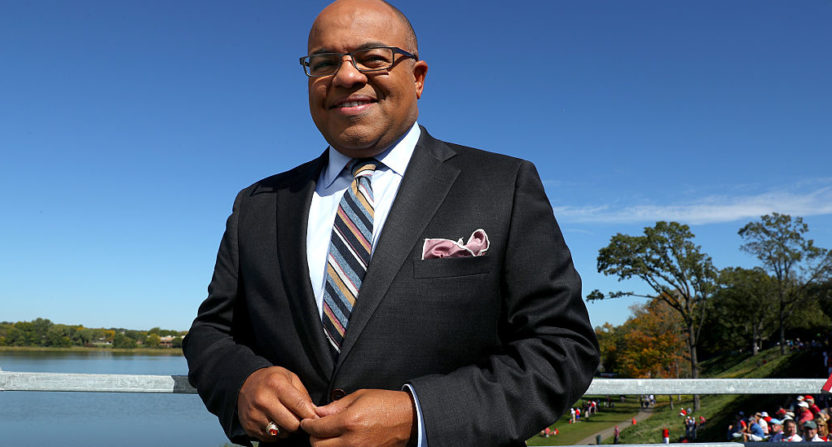 Earlier this week, Mike Tirico said on a conference call that he will make a point to cover potential athlete protests at the upcoming Winter Olympics. From Tirico’s answer, it sure seemed he was embracing the idea of getting political in his first run as primetime host of NBC’s Olympic coverage.

Well, not so fast.

In an interview with Sports Business Daily published on Friday, Tirico said he won’t delve into politics as aggressively as his predecessor, Bob Costas.

New NBC primetime Olympics host Mike Tirico said viewers can expect less politics out of him at the Pyeongchang Games compared to his predecessor. Bob Costas, who anchored NBC’s Olympics coverage from ’92-’16, memorably slammed the Russian government’s aggressive foreign policy and poor human rights record at the ’14 Sochi Games and also made it a point at the ’08 Beijing Games to recall the Tiananmen Square massacre with a live stand-up shot from the site. Tirico said he will carry a softer touch. “I’m much more a believer of ‘Here are the facts, you decide,’” Tirico said. “I don’t want to say (more) than Bob, but just in general, that’s my approach to most of these things. You don’t see me in 27, 28 years doing a lot of commentary within sports on ‘The NFL should do this,’ or ‘How dare the NBA.’ If I have an opinion, I will suggest a line of questioning, perhaps look to carve out a little bit of space to say something. But I’m of the opinion, especially here at the start, that people aren’t coming to watch the Games to watch me.”

At first, Tirico’s sentiment here sounds like a reversal from his previous comments. But really, there’s nothing inherently contradictory about willingly covering protests while also sticking to the facts and avoiding political commentary. On the conference call earlier this week, Tirico said “it’s our responsibility as reporters, journalists, hosts” to document protests, but “documenting” demonstrations does not necessarily mean offering opinions on them.

Tirico and NBC are likely to encounter this issue one way or another in Pyeongchang. The Olympics almost always feature some political undercurrents, and given recent wave of athlete activism and strong feelings all around about the presidency of Donald Trump, those storylines could jump to the forefront next month. Whether or not the upcoming Games feature a Tommie Smith/John Carlos moment, there’s a strong chance we see some sort of demonstration, small or large.

In a way, Tirico’s commitment to covering political subjects without opining on them could be exactly what NBC needs at a time when some viewers get angry at networks for even mentioning protests and others complain that the intersection of sports and social issues isn’t covered enough. With Costas as host, NBC was almost certainly going to frustrate some viewers. With Tirico focused on keeping protest talk dispassionate, maybe the network can keep everybody happy. Or rather, maybe it can keep enough people happy.