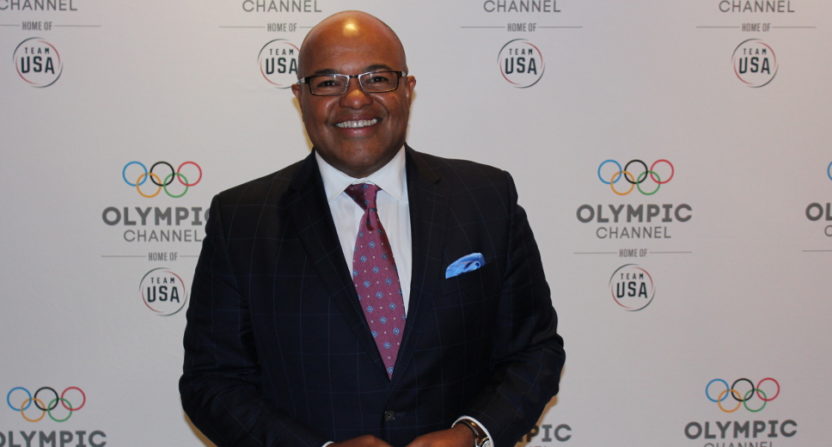 But the most notable quote may have come from the final question, about what NBC would do if an American athlete makes a political statement during the opening ceremony. Here’s the exchange from NBC’s transcript:

Q…For Katie and Mike, you talk about the human interest stories a lot, what you’re looking forward to with the opening ceremony. What happens if a U.S. athlete makes a political statement during the Opening Ceremony? Would you shy away from that?

MIKE TIRICO: I’ve been handling it most of the football season. I think our responsibility as reporters, journalists, hosts is to document the event that’s happening in front of us, and if there is some sort of protest, I think it’s important to do that.

I think one of the things that was missed a bit with the NFL players that were kneeling, which I assume is the genesis of the question here and got a lot of coverage around the country, we need to know why, as well. It’s one thing to say somebody was kneeling, somebody was protesting. Sometimes we didn’t do as good a job as an entire group in the media identifying what that player was protesting. Certainly on the Olympic stage it would take on a different level of interest because you’re not representing the Seahawks or the Lions or the Jaguars; you’re representing the USA. And that’s why I think we might not see those same types of protests that we saw during the NFL season, but it’s possible. And to your direct question, if it happens, whether it’s during the Opening Ceremony or during a medal ceremony, I think it’s our responsibility to report it, show it, and then follow up on what the situation was.

As we go through the Olympics, I think we’ll have a better feel for how that might play out and how it’ll be shown on television.

KATIE COURIC: I think it’s sort of hard to predict in advance, too. I don’t think we’d ever shy away from something that’s newsworthy. I think that collectively in a news organization anywhere or covering a big important news event, you make a determination based on the event. And so I think it really is dependent on what that looks like, what it is, how organized it is, and a lot of other factors that go into editorial decisions that are made every day.

There’s a few notable things there, from Tirico talking about their “responsibility” to document what’s going on and Couric saying they wouldn’t shy away from something newsworthy to Tirico’s comments on poor coverage of the NFL protests by the media. First, it’s interesting that Tirico essentially commits to covering almost any protest, while Couric is more restrained and says they’ll “make a determination based on the event.”

But beyond that, Tirico’s point about the NFL media is well-taken. This fall saw a whole lot of coverage of the fact that protests were happening, but not as much on why particular players opted to protest and what in particular they were protesting (which wasn’t always the exact same thing). And the emphasis on passing along the why and following up seems like a smart way for NBC to approach this.

If there are any athlete protests, particularly at a highly-watched event like the opening ceremony, they could put NBC between a rock and a hard place. If the network covers protests in-depth, they’ll get some anger from certain viewers and potentially even politicians like President Trump, and they’ll be criticized for mentioning politics on a broadcast that many want to be only about sports. But if they ignore or don’t show protests and other media outlets then get those stories, NBC not only loses out on sure-to-be in-demand content, but also takes criticism from media and media observers for censorship.

Covering any protests that do pop up, but being careful with it, is probably the smartest way to go, and it sounds like that’s the plan (at least from Tirico’s comments). But that’s going to draw some criticism too, and maybe even make some viewers mad enough to tune out. For NBC executives, the hope is probably that there are no protests and they can stick to sports. But that may not wind up being the case.