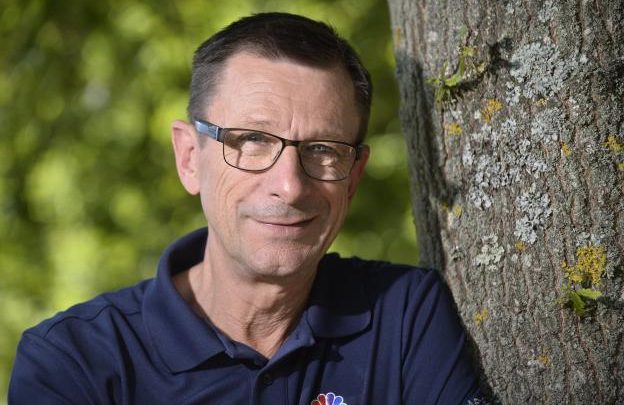 If you have ever watched the Tour de France or even been a casual cycling fan, you have heard the voices of Paul Sherwen and Phil Liggett on commentary. Liggett on play-by-play and Sherwen on analysis and color commentary, were one of the great announcing partnerships in sports. The two worked together on many cycling races, including 33 editions of the Tour de France.

That partnership sadly ended as Paul Sherwen died of heart failure last December at the age of 62. Before getting into broadcasting, Sherwen was a pro cyclist throughout the 1970s and 80s and specialized in climbing mountains and assisting his team leader up the steepest mountains throughout the world. It was this tenacity in climbing those mountains that got Sherwen to finish the Tour de France five times as a domestique.

As he was winding down his cycling career, Sherwen started broadcasting with Liggett and the two began a broadcasting partnership and a friendship that spanned over half his life. The two developed a rapport that only the greatest sports broadcasting duos could accomplish. The partnership of Liggett and Sherwen may not have been as well known in the United States as Summerall and Madden or Michaels and Collinsworth, but Liggett and Sherwen were not only as good as these teams but they were/are both ambassadors to the sport of cycling.

In a piece to Cycling News, Phil Liggett shared his memory of getting Sherwen into broadcasting and how the two formed such a great friendship.

I’m often asked what my favourite memory is of Paul. I don’t know if I can single out just one, but I remember approaching him at his final Paris-Nice, just before the time trial on the Col d’Eze, and asking if he’d be interested in television work. He had a two-year domestic deal on the table to ride for Raleigh, but I insisted that he inserted a clause in the contract that meant he didn’t race in July. He signed the deal with Raleigh and even though he was untrained as a journalist and as a commentator, he learned quickly and joined me at the Tour.

I remember how he would meticulously write his scripts the night before a race, and I’d help correct his English because back then his French was better. He was fluent from his time in France and during our broadcasts he’d slip notes to me, asking, ‘What’s the word for…?’ and I’d scribble back, ‘It’s this, you daft tart.’

But we had so many laughs. At races we’d share rooms – not because the budgets were tight, but because we’d lie awake until the small hours and share stories. That’s such a rarity because the so-called ‘talent’ never share rooms. He would tell me all these fascinating stories about his riding days, about Africa and his passions, and I would share everything I knew about journalism.

Paul Sherwen was much more than just a color commentator. If you’ve ever watched the Tour de France, you didn’t just get a description of the race or what the riders might be feeling and thinking. Sherwen was an encyclopedia of French history, architecture, and wineries along each stage of the Tour. It was Sherwen being an unofficial tour guide of France that got us through some of the more slower-paced moments of a five hour stage each day and kind of made you want to take a road trip of France to see the sights.

One thing that was very important to Sherwen was his connection to Africa. Sherwen’s family moved to Uganda when he was 7 and went to boarding school in Kenya. In 1999, Sherwen moved back to Uganda and when he wasn’t on commentary, owned a gold mine while also serving as the chairman of the Ugandan Conservation Foundation. In an interview conducted right before he died, Sherwen expanded upon why he lived in Uganda and the appreciation he had for the beauty of the area and the people native to the region.

When the 2019 Tour de France begins on Saturday, the riders will still be riding hard and the fans will still be celebrating but it will surely feel different. A couple weeks ago, NBC announced that studio analyst Bob Roll will partner with Liggett for this year’s race while former Vuelta a España winner Chris Horner makes his Tour de France studio debut. And while he will have the unenviable task of stepping in for a legend, the duo of Liggett and Roll will no doubt make their departed friend proud. The Tour will go on but everyone in the cycling world will be remembering Paul Sherwen as we get set to take our annual summer ride through the French countryside.