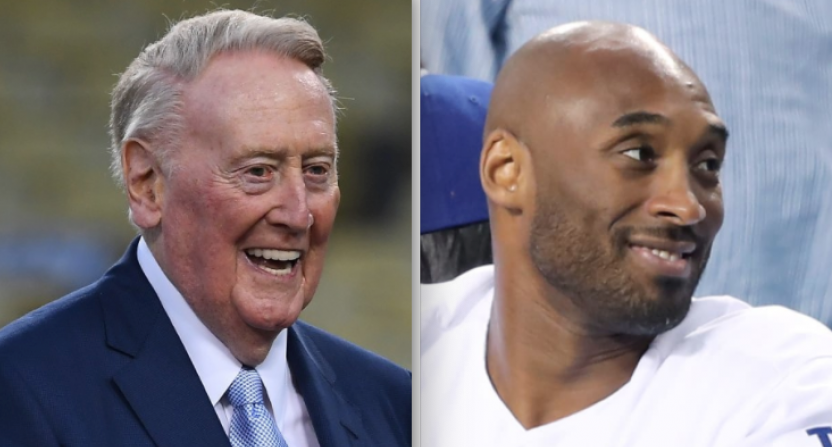 Sunday would have been Kobe Bryant’s 42nd birthday.

Many athletes and teams posted tributes on social media to the NBA superstar whose life (along with eight others, including his daughter Gianna) ended far too early in a tragic helicopter accident last January, including two of the league’s TV partners in ESPN and TNT.

Another Los Angeles sports icon was among those paying homage to Bryant. Legendary broadcaster Vin Scully narrated the Dodgers’ video tribute to the Lakers star, accompanying footage and multiple images of murals dedicated to Bryant throughout the city, providing warmth and poignance to a bittersweet anniversary as only he could.

“From the moment that he made his purple-and-gold Lakers debut in 1996, the City of Angels has loved him back,” said Scully.

“On January 26th of this year, we lost more than we’ll ever know,” he continued. “The tragic loss of Kobe, Gigi, six family friends, and their pilot took away from us the promising futures that each had within them. So today, we celebrate their lives and pledge to do our best for this city that Kobe loved so much.

Additionally, the Dodgers players each wore Bryant jerseys before their game Sunday versus the Colorado Rockies:

And here are the tributes Bryant’s Lakers posted to social media to commemorate their lost star and his daughter:

We miss you every day, Kobe. Happy birthday from your Lakers family. pic.twitter.com/6hzwFXgkwh

“We know that Kobe’s impact on the world was only just getting started,” said Scully, “and it’s our responsibility to further his work by supporting our community and making sure that girls have the same opportunity to take part in the sports that they love.”