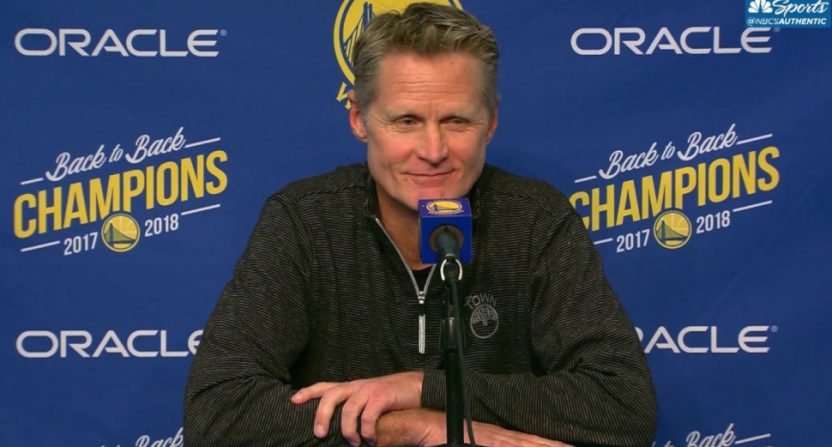 Oklahoma City Thunder guard Russell Westbrook has continued his feud with Berry Tramel of The Oklahoman recently with a bunch of “next question” responses, and teammate Paul George joined in Saturday night. That’s sparked some discussion around the league, and Golden State Warriors head coach Steve Kerr had an interesting response to the “next question” talk in his own post-game press conference Sunday. Here’s what Kerr said, via Ethan Sherwood Strauss of The Athletic:

After the Warriors bested​ the Clippers​ 113-105​ in​ Sunday’s Game 4 to take a 3-1 series​ lead,​ Steve Kerr​​ joked about handling future press conferences with “next question,” a la Russell Westbrook. Then he got serious. On Westbrook’s approach, Kerr summarized, “I think it’s dangerous for the league.”

…“I just feel that we have to be very careful as a league,” Kerr, a former TNT broadcaster, said of Westbrook’s approach and its potential spread. “We’re in a good place right now. Very popular. Fans love the game, the social dynamic, the fashion. But more than anything they love the connection they feel to the players. I think it’s important for the players to understand that it’s a key dynamic to this league. I don’t think this is a healthy dynamic, for this league, for any player, any team, any local media, any national media.”

…“It’s all part of the business,” Kerr said. “You’ve got to feed information to the fans. You don’t have to give a great answer, but it’s dangerous when you go down that path of no communication because one of the reasons people like the league right now is we have a lot of great players, really good guys who handle themselves well. So don’t kill that. You’ve got to keep that going. That’s a big part of the business.”

Kerr makes some valid points there, especially with his recognition of the difference between giving a rote answer and giving no answer at all. No one’s expecting NBA players to like every question or to answer everything thoughtfully and in depth, but disagreeing with a question’s premise or giving a rote response is at least something, whereas the “next question” just shuts a reporter down completely.

Also, this feels a bit different when it’s happening in a post-game press conference than if it was a one-on-one discussion, or if it was at an event like NFL Media Day (where Marshawn Lynch famously brought the “I’m just here so I won’t get fined” approach a few years back). These press conferences are more serious than NFL Media Day ever is, with actual questions about the game. And as for one-on-one discussions, players can choose not to talk to individual media members if they want.

But bringing this sort of approach to a press conference feels more like an attempt to show up a media member publicly, and it’s understandable why Kerr sees that as potentially damaging to the connection between players and fans. And with press conferences always televised these days, there is a connection there with the fans. The “next question” thing isn’t the end of the world, but there are some reasonable criticisms of it as an approach, and Kerr makes some good points about that.