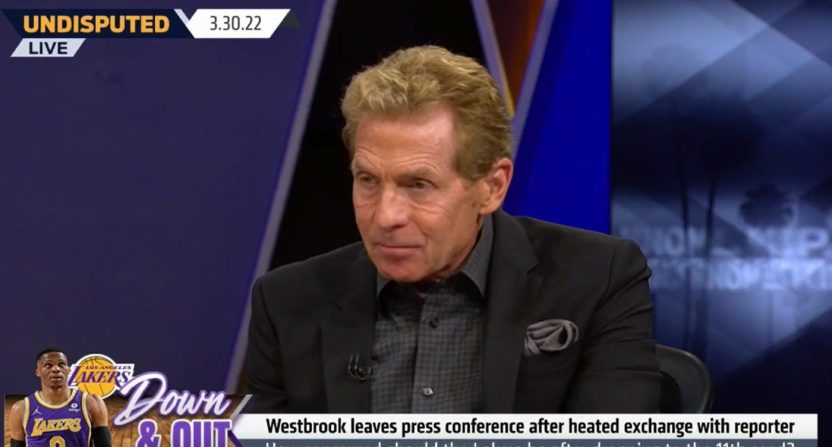 Los Angeles Lakers point guard Russell Westbrook is an easy target right now. The Lakers are bad, and Westbrook hasn’t been able to shake the blame and criticism being tossed his way this season.

Tuesday night, Westbrook had a heated exchange with NBA reporter Brad Turner after being asked if anything needs to change now that the Lakers find themselves on the outside looking in on the NBA Playoff picture. Westbrook stood up from his chair and confronted Turner for the question, but the veteran Los Angeles Times journalist handled the awkward moment with poise.

Wednesday morning on his Fox Sports show Undisputed, notorious Westbrook critic Skip Bayless admitted he’s not sure he could have handled the situation with the same professionalism.

“Said reporter was Brad Turner of the Los Angeles Times,” Bayless noted of the encounter. “Who does a very good job covering the Lakers and wrote a very balanced piece after that little confrontation…so I give him high marks for how he handled his side of that. I’m not sure I could have restrained myself the way he did.”

Bayless wasn’t saying he would have Will Smith’d Westbrook across the face, but the polarizing Fox Sports host likely would have said something to fuel the encounter.

“I’m only one person, champ,” Westbrook complained at one point during the exchange with Turner. “It’s a team game. So I don’t have an answer. You can give me your answer.”

“I don’t have it,” Turner said. “But I’m asking the pro who knows the game, plays the game, what you think you can do to make it better.”

Undisputed co-host Shannon Sharpe noted that Bayless would have fired back and blamed the Lakers piling losses on Westbrook for playing like “trash.”

“If he had pushed me like that, I would have said that,” Bayless admitted.

But would he have had the gall to call Westbrook “Westbrick” to his face?

Although he didn’t use the quip on Wednesday, Bayless has not ended his use of “Westbrick” since being called out by his Fox Sports colleague Doug Gottlieb. Bayless mocked Westbrook as Westbrick as recently as last week after the Lakers point guard missed three free throws and committed seven turnovers in a loss to the Philadelphia 76ers.

During the Lakers Tuesday night loss, Westbrook filled the stat sheet despite being a -25 while on the court. According to Bayless, Westbrook’s issue with Turner occurred because the Lakers point guard expected to be praised for scoring 25 points and only committing two turnovers during their loss to Dallas.

“He routinely goes to the postgame interview room with an attitude that is a mix of surly, defensive, defiant, delusional,” Bayless said of Westbrook. “And he’s just ready for somebody to say the wrong thing to him and he’s ready to lash back.”