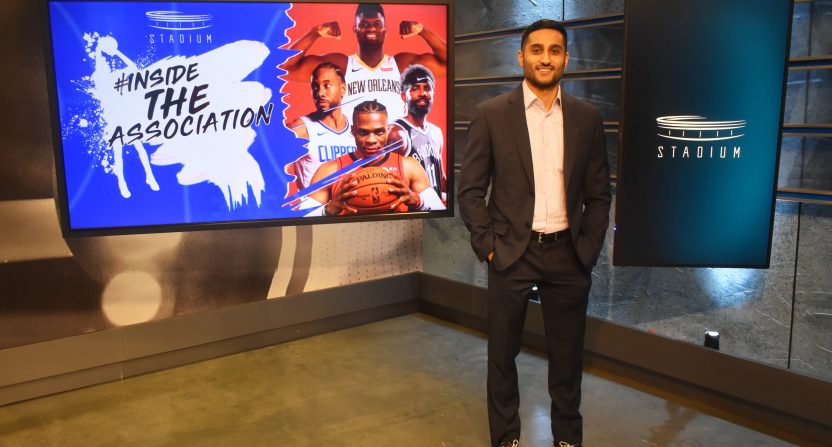 When Shams Charania re-signed with Stadium in September, there was a plan detailed and discussed for an expanded role across Sinclair-owned platforms.

Ahead of Stadium’s NBA Draft special Wednesday night from Chicago—where Charania will be joined by host Amina Smith and analysts Jeff Goodman, Doug Gottlieb, former Sacramento Kings executive Brandon Williams and others— Shams spoke about his new Stadium deal and how he’s going to have a large presence on Fox Sports RSNs (whatever they may be called), including pre and postgame shows during the 2020-2021 season.

“It’s been great the last few weeks getting text messages from people, friends, saying that they’ve seen me on Fox Sports Southwest or Fox Sports in Miami or Ohio,” Charania, 26, said over the phone. “It’s definitely a unique situation where to be able to reach all those regional outlets is exciting.”

Last week, Charania starred in a Stadium mock draft special on Sinclair-owned RSNs that included big-name guests like former ESPN analyst Marc Stein, Gottlieb, Goodman, and local Fox Sports NBA analysts like Atlanta’s Dominique Wilkins, Charlotte’s Dell Curry, and San Antonio’s Sean Elliott. Wednesday’s 8 p.m. Stadium special will have Charania working in a room off to the side of the main studio set, allowing him to work the phones and have the show cut to him for quick hits when he has information to provide. The news Shams provides will help drive the analysis from Goodman, Gottlieb and others.

“What will differentiate our show is that we’re doing live minute to minute, second by second analysis of everything that’s going on,” Charania said. “The last couple of years, and I did these shows when I was at Yahoo as well, I feel like I learned a lot playing a complementary role. And now being one of the people that helps be the engine to it is fun, exciting and it makes it feel like you’re a part of something big.”

Charania, whose written content can be found at The Athletic, is a well-known presence as one of the NBA’s leading newsbreakers, with nearly one million Twitter followers and a vast network of connections around the league. But one of the reasons Shams left Yahoo to join Stadium in 2018 was to grow as a presence in front of the camera. As Shams mentioned, he played a supporting role in the Adrian Wojnarowski-led Yahoo project The Vertical, where he participated in draft, free agency, summer league and trade deadline live shows. Stadium has allowed Charania to gradually further spread his wings on live shows as well as taped sit-down interviews with many of basketball’s biggest names.

The first year with both The Athletic and Stadium was challenging at times, Shams said, as he tried to navigate and juggle the responsibilities with both outlets. But now that he’s grown accustomed to the dual jobs, Charania’s excited about the direction of both companies as he gets more camera time to improve his skills.

“That’s what makes the RSN opportunity so amazing,” he said. “You get more eyeballs, whether it’s 80 million, 100 million more homes. To be able to reach that type of audience is awesome. Now I’m having reps that I never had in my life before, but I still feel like I just have such a long way to go.”

For one reason or another, Fox never utilized its national analysts for its local RSNs in basketball or any sport. So it was smart for Sinclair to even think of utilizing Charania in this way, something Shams was and still is enthusiastic about. It’s something the NBC Sports affiliates tried last season with Tom Haberstroh as a national NBA insider, and is something we’re going to see tried with Charania when preseason games begin in early December.

“The last two years I feel like I’ve made so many strides, and I feel like a lot of that has to do with the great opportunity that Stadium’s given me,” Charania, 26, said. “It’s fun when you request interviews now and people ask ‘is this for Stadium?’ I wasn’t getting that my first year there.”

Now beginning his third season at the company, Shams believes that Stadium is a real player among NBA outlets. It stemmed from the ambitions company CEO Jason Coyle had before Charania signed any deal in 2018.

“It was his and the whole company’s hunger and passion to really be a major force in the NBA and wanting to cover the NBA on a daily basis,” Shams said of Coyle. “We both have literally identical goals on a daily basis. And that’s what makes the partnership so fun.”

The night after the draft, Smith, Charania, Goodman, and Gottlieb will be back on the Fox Sports RSNs for a recap special, with a look back at everything that went down and a look toward free agency, which will go live on the air Friday night on Stadium. It’s part of a growing trend in his new deal with Stadium where we’ll be seeing a whole lot more of Shams on camera as we head toward the quickly approaching NBA season.