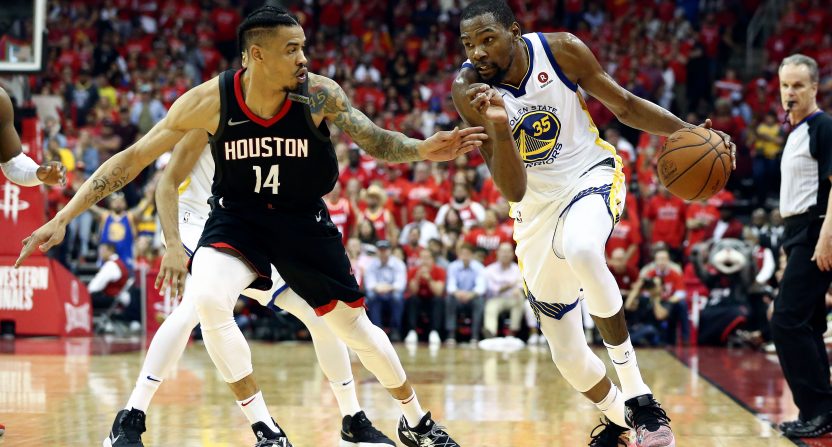 TNT’s coverage of the Warriors win over the Rockets in Western Conference Game 7 on Monday night delivered a 10.3 overnight rating, per Turner Sports, making it the second highest-rating NBA game ever on cable television (after the 2016 WCF Game 7 between the Warriors and Thunder).

It was also the highest-rated NBA game of the season, on either cable or broadcast TV.

TNT’s 2018 NBA WCF Game 7 (Warriors/Rockets) delivered cable television’s second highest-rated NBA game telecast of all time and the highest rating for an NBA game this year across all of television (cable and broadcast), based on a 10.3 metered market rating

It’s obviously not surprising that a whole lot of people tuned in to watch the Warriors and Rockets, two extremely good teams squaring off with an NBA Finals berth on the line. But it’s impressive that TNT pulled such a massive number despite the absence of Chris Paul, the previous lack of close games in the Western Conference Finals and the competition from Game 1 of the Stanley Cup Final over on NBC.

Additionally, TNT’s Inside the NBA studio show delivered its third-highest overnight rating ever Monday and was up 36 percent overall from its coverage of last year’s conference finals.

Turner’s big ratings Monday continue what has been an incredible postseason run for the NBA and its television partners. After a regular season that saw viewership rise on both local and national networks, the playoffs have seen sizable increases from last year, culminating in Cavs-Celtics Game 7 doing record numbers Sunday on ESPN before Warriors-Rockets Game 7 bested it on TNT.

Alas, this might be the last time this season we can tout strong NBA playoff ratings. With fans already complaining about Warriors-Cavs Part IV and a short series likely on the way, it’s unlikely that ratings for the Finals will be substantially up (or up at all) from recent years. Then again, with the roll the NBA currently seems to be on, you never know.