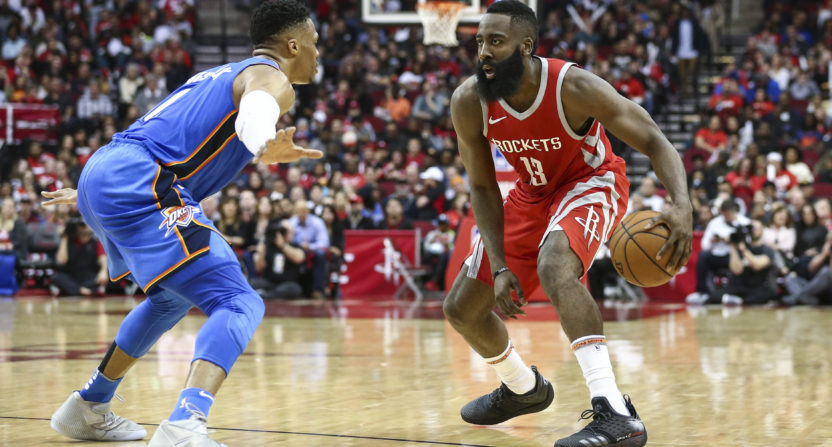 It has been a good year for the NBA. Both conferences have featured more exciting races than expected, with mildly surprising results atop the standings and all kinds of unexpected outcomes (Jazz! Blazers! Pacers!) just a bit lower down. Superstars have played like superstars, young players have emerged, storylines have coalesced, and awards races have generated spirited debate.

Throughout it all, ratings for nationally televised games have been impressive.

This week, both ABC and TNT released their 2017-18 NBA viewership data, and there was plenty for the networks (and the league) to smile about. ABC’s 17 games this season averaged 3,818,000 viewers, up 17 percent from last season. Within that figure, NBA Saturday Primetime was up 15 percent, while NBA Sunday Showcase was up 23 percent. ABC’s pregame show, NBA Countdown was up 12 percent.

Those increases bring ABC’s coverage back to roughly the level it was at before a down year in 2016-17. Those 3,818,000 average viewers left the network a touch below its 2015-16 level but up from the two years before that.

As Sports Media Watch points out, some of ABC’s increase owed to subtle scheduling changes: the airing of a third Christmas Day game and the decision not to broadcast any NBA games during the first two weekend of the NCAA Tournament. Still, a double-digit uptick is well worth celebrating for ABC.

Over at Turner Sports, meanwhile, the news was equally good. The 67 NBA games on TNT averaged 1.7 million viewers, the network announced, up 13 percent from last season. That figure includes a 17 percent increase for TNT’s polarizing Players Only broadcasts in the second year of the series.

Overall, ratings and viewership news has been good all year long for the NBA. We’ll soon see if the trend continues into the league’s postseason.