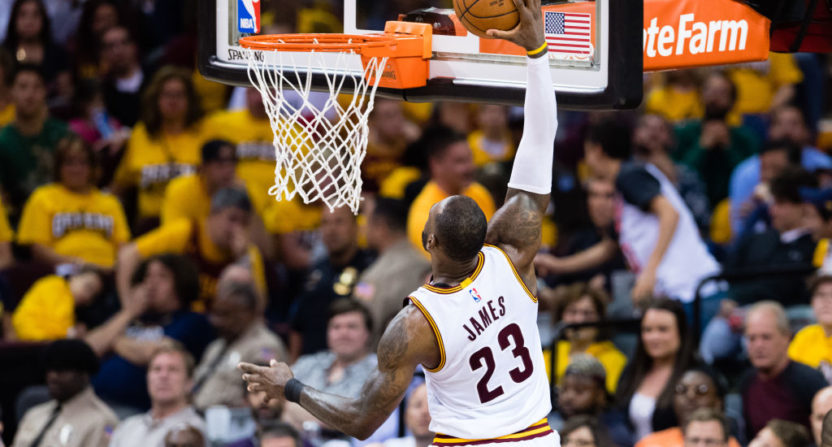 The NBA Finals are here. Did the playoffs happen? The regular season? As a Cleveland Cavaliers fan, I’ve seen and experienced my fair share of heartbreak. The non-LeBron James years were rough and normally, I don’t have that much going on in my life in June. So when he decided to come back, I was happy to reignite my social life and contribute to the many bars around the arena.

As reigning World Champs, this year was a bit stale. It’s like the honeymoon stage, 52 years in the making, had ended. “Who cares about the regular season!” you’d hear on the radio airwaves. All of a sudden, 82 games are a formality? “The playoffs were so boring!” We’ve become basic basketball fans. And I’m looking at you, NBA.

It sounds crazy. But when you have a small handful of teams that are actually good, those cities only care about the playoffs anymore and the rest of the cities have no dog in the fight.

The trickle-down effect? Ratings are down, ticket sales are stagnant, distribution agreements are harder than ever to negotiate, rights fees are through the roof and, of course, the general interest and opinion of the NBA is well, not good. The breaking point this past season? For one primetime Saturday night game on ABC between the Cavaliers and Clippers, the “Big Three” (James, Kyrie Irving, Kevin Love) sat out. The NBA finally had Adam Silver step in and… lightly tap his foot and frown.

Never before has the regular season been seen as just a formality. So why now? The NBA’s control has almost become a high school party with the parents saying it’s okay to drink. Just stay the night here and leave your keys with me.

When negotiating television agreements with providers across the country, I was able to learn about the many fan bases. The regular season was, and still is, the regional sports network bread and butter — actually, it’s about 85 percent of their revenue.

RSNs don’t get any live local broadcasts after the first round of NBA (and NHL) playoffs, and those first-round games they do get are side-by-sides. They don’t get any with MLB. It would drive me crazy, trying to justify the carriage of some of the best teams in the league, and not having the ratings to support my fight. I mostly had this issue with the NBA teams.

MLB and NHL fans seem to be more grounded, loyal and patient. It only became more difficult, seeing the players seemingly fall into this downward spiral, while the distribution revenue helps pay their income and the league not doing its part to stop it. This goes for the broadcast and cable channels carrying the NBA product, too. Do you think the ESPN layoffs didn’t have a part in all of this?

It hasn’t helped that the superstars are all flocking to certain teams, either. They want to win. I get it. But if Chris Paul heads out of Los Angeles next season, the Clippers subscriber fee value drops and so does the interest and the fanbase. The Knicks are a joke, I forgot the Lakers existed, and I know more players on the Utah Jazz than I would ever care to. (Don’t ever leave, Gordon Hayward)

With all of this being said, the NBA needs a good smack on the ass and a hell of a Finals showdown. With seven NBA All-stars on the court, it better be an epic finale. But the league has to capitalize on this, and they need to take back the authoritative reign. The networks, advertisers, and the teams are counting on it.