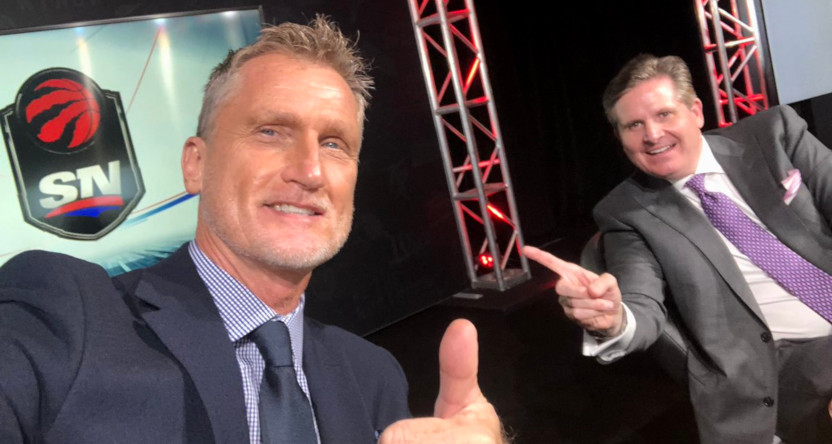 There have been quite a few changes to NBA broadcast booths ahead of the upcoming 2021-22 season, and one more was announced Thursday. That was the Toronto Raptors’ announcement that Alvin Williams (who played for the team from 1998-2006, part of an overall NBA career that stretched from 1997-2007, and had been part of the Sportsnet broadcast crew since 2015, but mostly as a studio analyst) will serve as the analyst for the 41 Raptors’ games on Sportsnet this year, replacing Leo Rautins. (Jack Armstrong will continue as analyst for the 41 games on TSN, and Matt Devlin (seen at right above with Rautins in their remote broadcasting setup last year) will continue to call play-by-play for both networks.) Here’s more from that announcement:

For the 17th straight season, all 82 Raptors telecasts will be produced by NBA TV Canada. Veteran play-by-play voice Matt Devlin will call all the action for a 14th season. Jack “The Coach” Armstrong will lend his expertise as the analyst on TSN telecasts with former Raptor Alvin Williams joining Sportsnet’s broadcast to handle colour commentary duties. Williams played 417 games in Toronto, averaging 9.3 points, 4.3 assists and 28.1 minutes. He ranks fourth all-time in franchise history in assists (1,791), sixth in steals (517) and ninth in games played.

Here’s more from Sportsnet’s release on their broadcasts, which also spells out the pre- and post-game shows (and the addition of Amy Audibert as a sideline reporter), and has no mention of Rautins:

No reason has been given for the move. But, unlike some other broadcasting moves this year, it seems this isn’t about vaccination status. Rautins has been a vocal proponent of COVID-19 vaccines on Twitter:

Regardless of what the motivation was for this move, this is a huge change. Rautins had been involved with Raptors’ broadcasts since their first season in 1995. He has also had a lot of involvement with Canada Basketball, including serving as head coach of the men’s senior national team from 2005-11. And Raptors’ broadcasts are going to be very different without him. We’ll see how Williams is received in a main analyst role.

Huge thanks ? to all for your kind words & thoughts – I am beyond touched & humbled!??☺️ I will be back on #TSN’s ? @Raptors broadcasts this season – more info to come – and I’m ready for another fun & exciting year – my 27th!!????#dayoner #livingthedream pic.twitter.com/AY3Vru2j9F

[Rogers Sports and Media; 2020 photo from Rautins on Twitter]