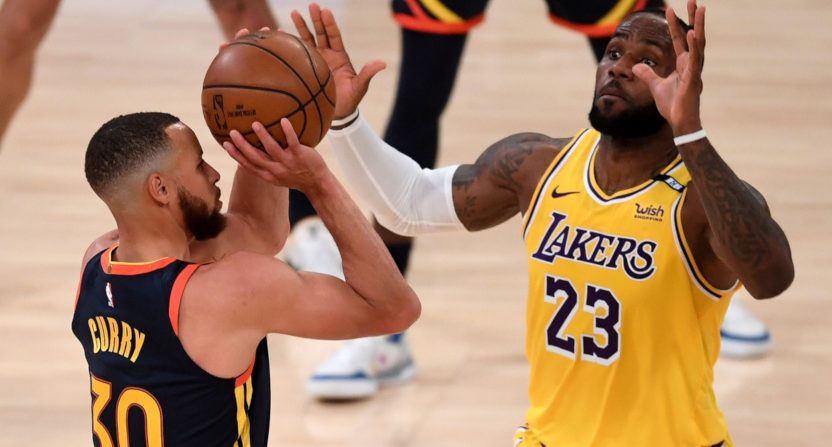 The idea of NBA play-in games has taken some criticism, including from Los Angeles Lakers’ star LeBron James, but the ratings for the Lakers’ play-in game Wednesday against the Golden State Warriors (a 103-100 win) were certainly strong. As per an ESPN release, that game drew the largest audience for an ESPN NBA telecast since the 2019 Western Conference Finals:

Last night’s @Warriors vs. @Lakers #StateFarmPlayIn game was the most-watched NBA telecast on ESPN since the 2019 Western Conference Finals

Here are a few more details from that release:

ESPN’s exclusive telecast of the Los Angeles Lakers vs. Golden State Warriors game generated 5,618,000 viewers, making it the largest audience for an NBA game on ESPN since the 2019 Western Conference Finals, according to Nielsen. The telecast peaked with 6,149,000 viewers on ESPN from 12:30-1 a.m. ET.

The Lakers vs. Warriors game, part of the State Farm NBA Play-In Tournament and widely-regarded as an instant classic, was up 190 percent from the single Play-In game on ABC last season. It was the second-most watched NBA game of the 2020-21 season across all networks, only behind the Los Angeles Lakers vs. Dallas Mavericks Christmas Day game simulcast on ABC and ESPN. It won the night across all of television in every key sales demo.

In addition, ESPN’s early game last night, featuring the Memphis Grizzlies vs. San Antonio Spurs, delivered an average audience of 2,293,000 viewers, making it the third-most watched NBA game on ESPN of the 2020-21 season.

That last paragraph is interesting, as it shows a stark divide in audience between the two play-in games. Yes, Lakers-Warriors had teams more often shown nationally, and yes, it took place at a better time (especially for local fans of both teams). But having its average audience  come in at almost 2.5 times what Grizzlies-Spurs drew is pretty notable. And it’s also notable that Grizzlies-Spurs was behind a regular-season game.

Similarly, Tuesday night’s games on TNT averaged 2.50 million (Wizards-Celtics) and 1.39 million (Hornets-Pacers) viewers. So that suggests that while a Lakers-Warriors matchup in a play-in game was a tremendous draw, and while Wizards-Celtics was certainly decent (it was the highest NBA cable audience since Christmas Day), the general play-in concept isn’t necessarily a revolutionary success so far. But we’ll have more data on the general success of the play-in games after the games tonight (Pacers-Wizards, 8 p.m. ET, TNT) and tomorrow (Warriors-Grizzlies, 9 p.m. ET, ESPN). And those numbers will be interesting to see.