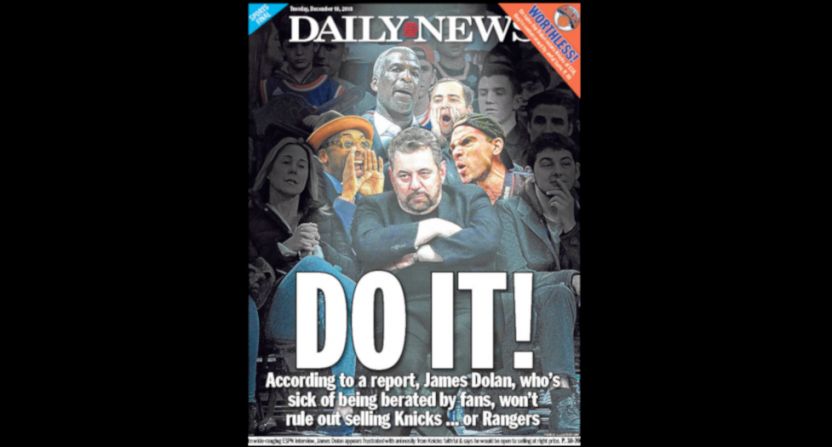 There’s been a lot of criticism of Knicks/Rangers/MSG owner Jim Dolan over the years, and he’s had quite the responses to that, from fighting with all of WFAN and Entercom over comments from Maggie Gray to calling Rupert Murdoch over a FS1 subway ad. Earlier this week, ESPN’s Ian O’Connor wrote a long profile of Dolan that tried to present Dolan in context, but also still referenced that he was quite sensitive to remarks in the media. And Dolan seemed to serve further evidence of that this week, with Bob Raissman of The New York Daily News writing that the Knicks barred NYDN Knicks’ beat writer Stefan Bondy from a press conference with president Steve Mills after a “DO IT” headline in the paper (about selling the team) criticized Dolan’s ownership. First, here’s that cover (seen in part up top) in full:

And here’s what Raissman wrote about the team’s response:

Those who thought James (Guitar Jimmy) Dolan was signaling a new era of media cooperation when he allowed an ESPN.com columnist to interview him for two hours were wrong.

On Friday, Daily News Knicks beat writer Stefan Bondy was banned from attending Knicks prez Steve Mills’ press conference. Perhaps Dolan, who likes projecting a street fighter image, was sensitive to a recent Daily News back page that begged him (the headline read “DO IT”) to sell the Knicks, a team he has mismanaged (that’s being kind) for over two decades.

…Daily News Sports Editor Eric Barrow asked Kim Kerns, senior vice president of communications at MSG, why Bondy was shut out. “It was invitation only,” Kerns kept repeating. “There is nothing more to add.”

Barrow said he asked Kerns the question: “So we weren’t invited?” five different ways and she continued repeating, “it was invitation only.” He asked why the Knicks organization didn’t extend Bondy an invitation and whether this would happen again in the future.

“There’s nothing more to add,” she said.

This seems incredibly ill-thought-out on the Knicks’ part. It’s not like this was a highly secretive press opportunity, as the rest of the New York media was there, and the whole thing’s available on YouTube thanks to MSG. And allowing Bondy to attend would have been far less damaging for the team in the long run. Also, a “DO IT” cover urging Dolan to sell the team is far from the most annoying to the Knicks one the NYDN has run; there have been plenty of these over the years.

There’s only so much you can do from a press conference, but barring a reporter is the sort of thing that’s going to gain much wider traction. The Streisand effect is not to be trifled with. And this is perhaps yet further proof that Dolan is all too sensitive to media criticism, and that his approach isn’t necessarily the best one. People are used to critical headlines about Dolan and the Knicks, and they’re not that big of a deal, but this sort of behavior draws much more attention to them. And it indicates that the franchise still can’t take criticism, and feels it’s worth taking much more flak in the long run to try and punish those who criticize it. Perhaps Dolan and company should grow a thicker skin.