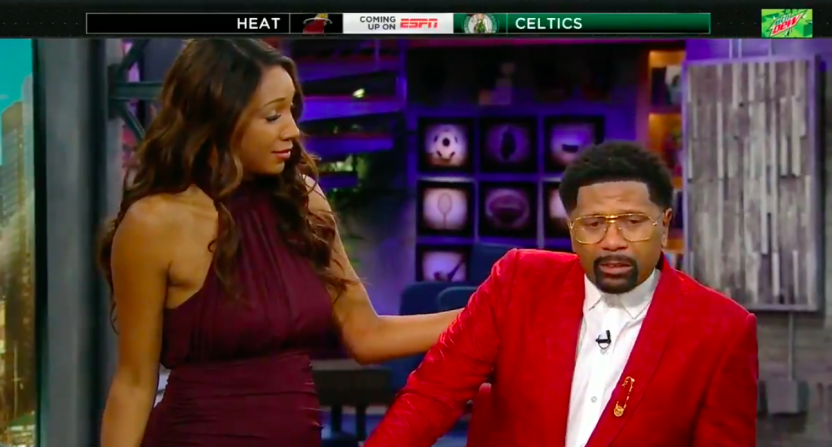 Jeanne Rose may not be as well-known as her son, former NBA star and current ESPN personality Jalen Rose. But if you know any Jalens (or Jaylens or Jaylyns) in your life, they have her to thank for it. Jalen’s success at Michigan led to a boom in other parents naming their kids Jalen, which these days feels like a pretty common first name. Jeanne chose the name Jalen as an amalgamation of his father James (NBA player Jimmie Walker) and uncle Leonard.

All I want this Birthday is for my Mom Jeanne Rose to defeat Cancer!! Love you MA!!!! ❤️ pic.twitter.com/X9c2iQnM7Y

Beyond that fun fact, Jalen and Jeanne’s strong relationship has been well-documented, as was her battle with cancer in recent years. Jeanne passed away earlier this year on February 2, a moment that so many of his colleagues at ESPN honored at the time.

Respect and love to @JalenRose, who lost his beloved mother Jeanne to cancer. Not only was Jeanne an incredible woman, parent, friend, she also invented the name Jalen(!) Great article here:https://t.co/67FmLdqB3m pic.twitter.com/rHeAvHCC9R

Mother’s Day is a difficult time for many people who have lost mothers and grandmothers and this year was bound to be no exception for Jalen Rose. He appeared on ESPN NBA Countdown on Sunday to talk NBA alongside Maria Taylor and Adrian Wojnarowski. Taylor took time during the show to check in with Jalen and honor his mom, which led to a poignant moment for Rose, Taylor, and Woj to share together.

An incredibly touching and emotional moment as @JalenRose pays tribute to his late mother on NBA Countdown ❤️ pic.twitter.com/cL7d0I2UkX

“We fell in love with basketball together. My father played in the league and to not know him… She was like, ‘You’re going to make it, you’re going to get us out the hood, I promise you.’ And I was like ‘I’m going to do it ma.’ And I did it. We did it.”

“I used to sign ‘Dr. J’ as my autograph when I was little, and people was laughing at me and was teasing me,” Rose said. “And she was like ‘You’re gonna make it. You is Dr. J. But you ain’t never better than Magic (Johnson).’ That’s how she motivated me. … I’m just happy that the name Jalen is going to carry our legacy, carry her legacy.”