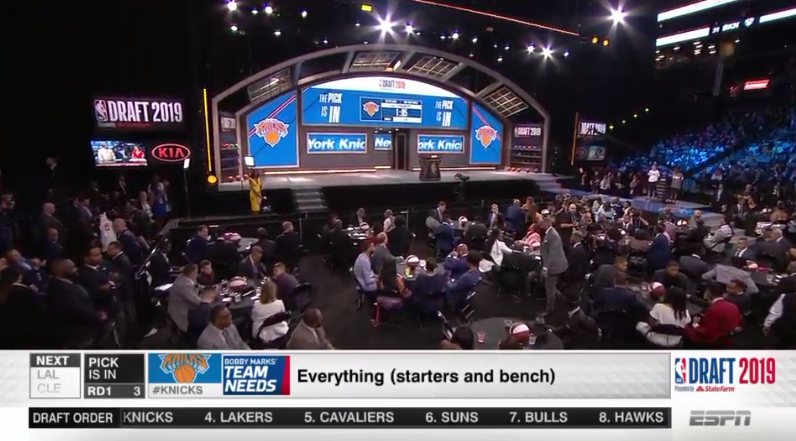 As crazy as this NBA offseason has already been, it seems increasingly likely that the New York Knicks will be sitting on the sidelines once again. This is after there has been months of hype surrounding the Knicks being the frontrunners to land Kevin Durant and Kyrie Irving… and somehow also getting Anthony Davis, LeBron James, Steph Curry, Zion Williamson, and a returning Kobe Bryant.

Of course, like every other time in recent memory that the Knicks have been hyped up for an offseason after racking up tons of losses, it doesn’t look like it’s going to work out that way. The Knicks finished third in the draft lottery and missing out on Zion, Kevin Durant tore his Achilles in the NBA Finals and has his future in doubt, Anthony Davis is going to the Lakers, and Kyrie looks like he’s going to choose the Nets, yes the Brooklyn Nets, over the Knicks. That’s… not ideal.

With the Knicks’ grand plan seemingly unraveling before our eyes, ESPN’s NBA Draft chyron operators had a little fun at the team’s expense when it came to their future needs.

At least we’re not the Knicks.

Please be nicer to us, @espn pic.twitter.com/Q5a0h21qMC

The Knicks did end up drafting Duke guard R.J. Barrett with the third overall pick in the draft, who looks like he’ll have a tall task ahead of him to bring the Knicks back to relevance this year. That may have to wait until next season, when the Knicks will probably need everything once again. Maybe then ESPN can throw “team owner” into their needs as well.