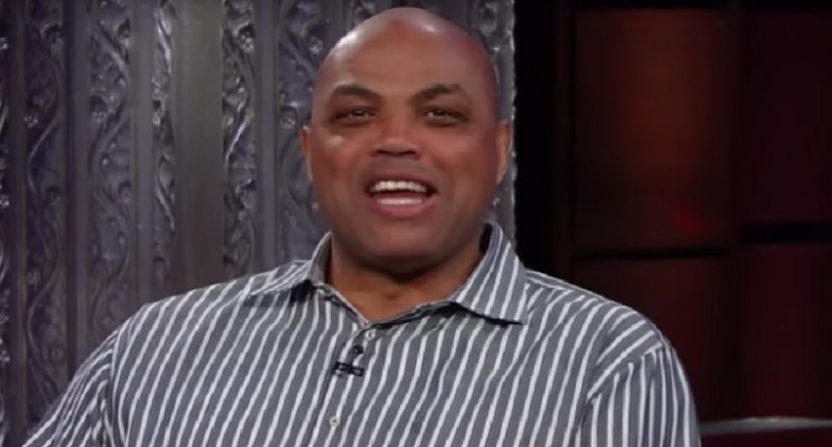 Charles Barkley appearing on any late-night talk show is almost certain to be must-watch television. Of course, he provides his own form of late-night entertainment as part of the studio crew on TNT’s Inside the NBA. But in the guest chair on a talk show, Charles isn’t going to be boring. And the host sitting behind the desk knows he or she can ask the former NBA star anything and will get an answer.

Barkley didn’t disappoint during his appearance on The Late Show with Stephen Colbert Thursday night. Colbert has had plenty of harsh spotlight in recent days because of his comments directed at President Donald Trump in defense of his CBS colleague, Face the Nation host John Dickerson. Colbert addressed the uproar (which included a #FireColbert hashtag from Trump supporters), which may have put the issue to rest for now. But the Late Show host may also have been hoping Barkley would say something controversial to keep the spotlight on his show, yet direct criticism elsewhere.

Presumably on the show to promote his upcoming TNT program American Race, Barkley and Colbert had plenty of other topics to cover over two segments Thursday night. Colbert opened by teasing Chuck about his golf swing, to which Barkley countered that the host owed him some money for betting on the Golden State Warriors in last year’s NBA Finals. Hopefully, Colbert treating Barkley to some golf makes it on TV sometime in the fall. Until then, Barkley had opinions to share on the NBA Playoffs, millennials and today’s NBA players.

Yes, Charles — you do sound like the “grumpy old parents,” griping about how kids today are spoiled rotten. “When I played, we flew commercial!” But we like cranky Chuck, and it’s not like he doesn’t have the career achievements to give his opinions credibility. By the way, do we know where Barkley got the idea that millennials gave themselves that nickname or label, though?

Naturally, Charles wasn’t done. Can any talk show limit him to just one segment? Barkley discussed his love of Krispy Kremes and his ambition to work out this summer now that he’s gotten hip replacement surgery. (Let’s all stick to that resolution, Chuck.) Colbert also set him up to express his dislike for man-buns and his plan to travel the country cutting them off unsuspecting heads before finally getting around to talking about American Race and one episode focused on the Muslim ban. (Barkley’s use of that phrase will surely irritate many.)

“One episode is about the Muslim ban,” Barkley said. “I think it’s so disrespectful to lump a whole entire religious group into a box, thinking they’re all terrorists and things like that.” He went on to explain that the episode also addresses undocumented immigrants who are “getting a bad rap” and “do a lot of work that blacks and whites don’t want to do” in this country. Barkley insists he just wants to create a debate and not try to change anybody’s mind. Whether viewers take it that way or Barkley keeps his opinions to himself during the program remains to be seen.

Barkley and Colbert end the segment talking about the Adam Jones situation at Fenway Park, in which the Baltimore Orioles outfielder was subjected to racial taunts and insults on Monday night, then received a standing ovation from Red Sox fans the following evening. Barkley wasn’t impressed by the standing ovation given to Jones, saying that fans at Fenway should have spoken out against the racist behavior from the beginning. To keep quiet is a form of condoning it.

Charles Barkley most certainly did not disappoint when it came to commenting on current events. And Stephen Colbert may have been the best of the three network late-night hosts to have that conversation with him, since he’s a bit more willing to delve into politics and social issues than his colleagues. (Though Jimmy Kimmel rather publicly made himself part of the health care debate this week.) That was an entertaining, compelling 15 minutes of late-night TV.