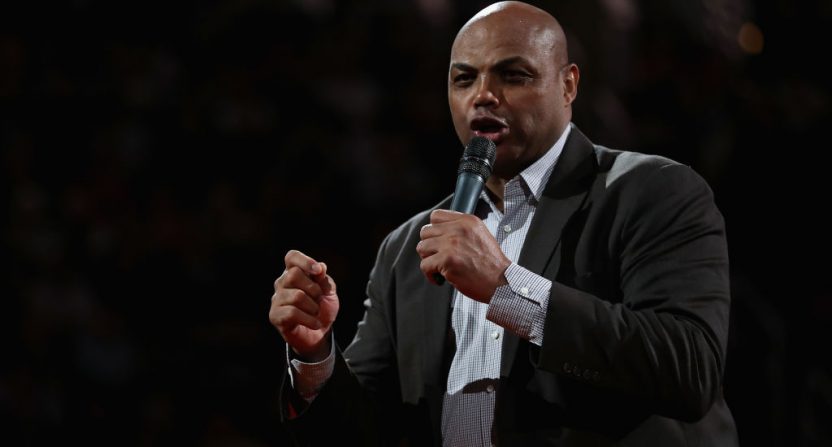 Last July, TNT announced a forthcoming series called The Race Card, featuring NBA on TNT analyst Charles Barkley getting together with “cultural leaders” to “talk about race, class and cultural differences” for six one-hour episodes. They released a trailer in October, and now we have an air date (plus the news that this is apparently now only a four-part series, with the new title of American Race, and with episodes airing back-to-back on two nights). Here’s more detail from the release Turner issued Thursday:

Charles Barkley, NBA legend and Sports Emmy®-winning commentator for TNT’s Inside the NBA, has been dealing with the issue of race his entire life. Now in American Race, a two-night television event from Turner’s TNT, he is taking a journey across the country to explore the issue from different angles and engage in thoughtful but spirited dialogue with a diverse cross section of Americans. He brings with him a truly ambitious goal of building the kind of mutual understanding that can lead to productive solutions.

TNT’s American Race will air over two nights – Thursday, May 11, and Friday, May 12 – with two episodes each night at 9 and 10 p.m. (ET/PT). In addition, TNT will offer a preview of the first episode on Sunday, May 7, at 11:30 p.m. (ET/PT), following the network’s coverage of the NBA Playoffs. And on Monday, May 8, all four episodes will be made available to subscribers through VOD and on the TNT app.

It’s interesting that this has changed so much since the last time we heard of it, both in title and in episode order. And the release is still pretty vague on what exactly we’re going to see. Here’s how it describes the show:

Troubled by the way racism and other forms of discrimination have affected so many communities, Barkley has made it his personal mission not only to learn about varying perspectives but also to give a voice to those most impacted by discrimination. In American Race, he will hone in on such topics as police and race relations, Muslims in America, immigration issues and Hollywood stereotyping. The results are shockingly provocative and strikingly emotional, with Barkley finding his own preconceived notions being examined and challenged in each episode.

Everything is on the table in American Race as Barkley sets out to generate meaningful dialogue and support potential solutions. Along the way, he engages with everyday people as well as cultural and academic experts, eventually realizing that his own views continue to evolve.

It certainly seems positive that the pitch involves Barkley talking to experts and having his ideas challenged rather than just having him express his own views for an hour. And there could be some interesting material here, as there have been plenty of times where Barkley has been a thoughtful spokesman on serious issues. However, there are also lots of times where he just says what he thinks without reflection on how that’s going to be perceived, as with his comments on Isaiah Thomas’ pre-game tears making him uncomfortable and his subsequent doubling-down by shooting the critical messengers.

Barkley has also been known to be self-serving, and to doggedly maintain opinions even as evidence to the contrary piles up (see his recurring rants about how today’s NBA is terrible compared to his era). There’s a reason he’s been called “basically Skip Bayless with charisma;” he drops plenty of hot takes.

Of course, Barkley can also be thoughtful, as we saw with his commentary on North Carolina’s anti-gay laws. If we get the thoughtful and measured Barkley and some actual insightful discussion, this could be valuable. But if we get the hot take Barkley, that could ignite the conversation all right, but not necessarily in a good way.