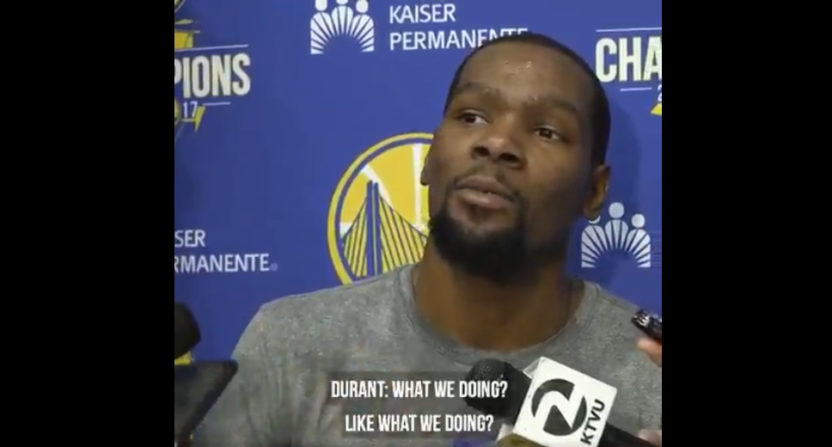 We occasionally see media covering football come to or almost come to blows, whether it’s at practices or on Radio Row, but it’s a little less common in basketball. That’s what happened at the Golden State Warriors’ practice Thursday, though, as two cameramen trying to shoot a Kevin Durant interview got in a heated and profane argument about being in each other’s space. Here’s video via Bay Area radio station KNBR:

Things got a bit heated at Warriors practice today… pic.twitter.com/WrBtd1H0jc

We present the Academy Award-worthy dialogue from this exchange:

Cameraman 2: “I was parked here and you’re the one who cut me.”

Durant: “What are we doing? Like, what we doing?”

The first rule of Cameraman Fight Club is you don’t talk about Cameraman Fight Club. And amazingly, this wasn’t even the only boneheaded media moment from the Warriors’ practice Thursday, as someone else tried to get head coach Steve Kerr to violate the NBA’s tampering policy by commenting on the LeBron James rumors:

The Warriors are currently the best in the NBA, with a 40-11 record. The media covering them, not so much.