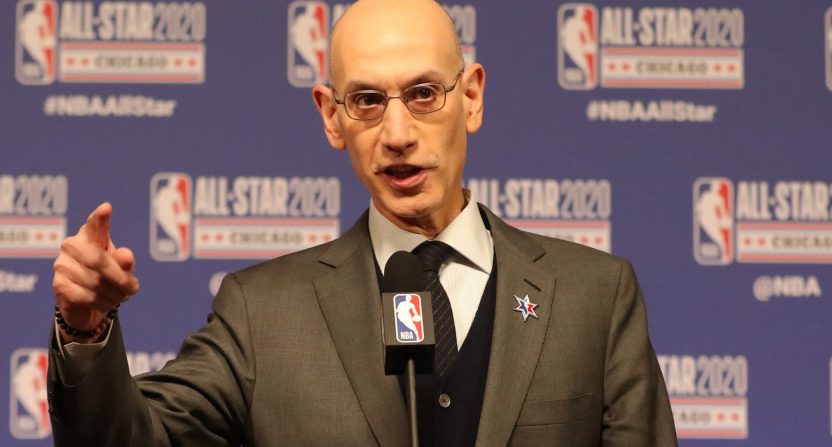 Adam Silver went on the record with Time earlier this week as the NBA was named one of the publication’s top 100 influential companies.

The NBA commissioner’s comments were wide-ranging on the current state of professional basketball and where it might be going next, but he also hit on a few very relevant subjects, including how technology has fueled growth and the league’s relationship with China.

On how the NBA has embraced technology and social media for (mostly) the better:

Technology was the accelerator for us. As much growth as we’ve seen over the past decade because of technology I think we’ll see a multiple of that growth over the next decade. Because the technology has gotten so much better. My joke sometimes now is, I have a huge television on my living room wall of my apartment. But out of convenience I’ll often watch on my phone, because the quality is so good. The user interface is better. It’s easier to touch the app and watch any game I want than to find my way through 2,000 channels and the legacy systems that run through traditional cable and satellite.

The other aspect where the internet has fundamentally changed the league is it’s allowed our players to demonstrate just how truly multidimensional they are. And whether it’s more in-depth knowledge about the game of basketball, or about what their favorite music is, or a political point of view, they now have been provided this platform. The game comes alive for a lot of people.

Silver’s point on legacy distribution technology is fascinating, as it’s certainly something that maybe other league commissioners aren’t really considering. (Given what we’ve seen from Rob Manfred, for example, it’s tough to imagine Rob Manfred watching baseball at all, much less contemplating the various ways baseball fans are interacting with different forms of streaming and broadcasting tech.)

It’s an important acknowledgment, though, and how the NBA and other leagues handle the coming migration from traditional television providers and other options will be very important to bottom lines and rights negotiations.

Maybe an even bigger deal to the NBA’s bottom line: the league’s relationship with China, which is strained at best at the moment, about 1.5 years on from Daryl Morey’s pro-Hong Kong protest tweet. Silver was measured with his remarks, as you’d expect for such a delicate topic, but he immediately pointed to the NBA’s partnership with Tencent as a potential agent of change:

We continue to televise our games in China. Our most significant television partner is Tencent, which is a streaming service in China. And we have hundreds of millions of fans in China who we continue to serve. I’ll take a step back there and restate the NBA’s mission, which is to improve people’s lives through the game of basketball.

And we think exporting NBA basketball to China and to virtually every country in the world continues to fit within our mission. The political science major in me believes that engagement is better than isolation. That a so-called boycott of China, taking into account legitimate criticisms of the Chinese system, won’t further the agenda of those who seek to bring about global change. Working with Chinese solely on NBA basketball has been a net plus for building relationships between two superpowers.

Silver noted that it’s not just going to magically bring about change for the betterment of society, but this is the sort of tightrope that all businesses looking to capture emerging markets have to walk. But the league clearly plans on more Chinese broadcasts going forward, which means finding a way to straddle the line between revenue generation and, well, doing the right thing from a human rights perspective. It’ll take more than a few paragraphs in an interview to manage that, no matter how unflappable Silver remains.