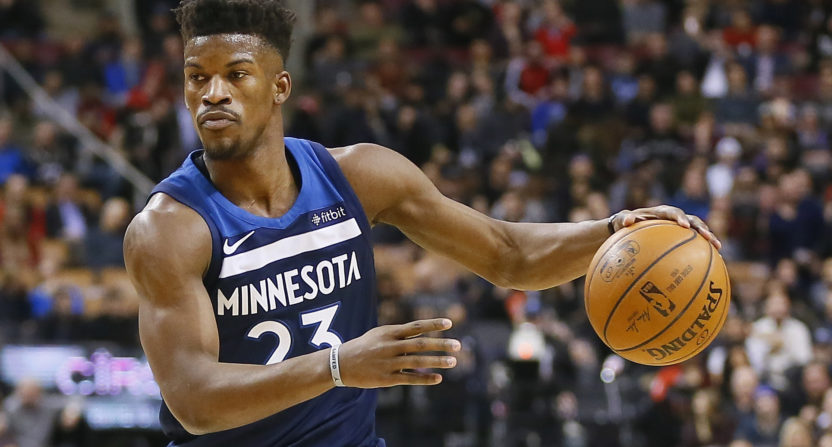 Though the February NBA schedule is shortened because of the week-long All-Star break, it’s one of the league’s most significant months for nationally televised games.

With college basketball front and center on ESPN and TNT in March, the networks have packed plenty of really compelling nights of games into this month. With so many storylines in the NBA and the trade deadline just a week away, here are the matchups we’re looking forward to this month:

How will James Harden follow up the first 60-point triple-double in NBA history? There’s been talk of Stephen Curry challenging Harden in the MVP race given his superb play lately, but Harden’s performance showed that the state of his union with Chris Paul and the Rockets is strong.

The Spurs are still Houston’s biggest obstacle in trying to reach the conference finals, and we’ll see how many wrinkles, if any, Gregg Popovich throws at Harden defensively. Whatever San Antonio did, it didn’t work in their first matchup, a 15-point December loss that was the 12th victory during the Rockets’ 14-game win streak that month.

The Heat don’t get nearly enough respect. Miami is currently 4th in the Eastern Conference (though a game ahead of 7th) and 1.5 games behind Cleveland for third. They have the third best scoring defense and the 5th best defensive rating in the league, yet have no All-Stars (UPDATE: one All-Star, Goran Dragic).

Miami’s only nationally televised game is here against the struggling Sixers, losers of three straight, who are an enigma in their own right. Everyone is rightfully gushing about their elite young talent, but at 24-24 and in the 8th spot in the East, their playoff hopes are tenuous at best right now despite nine wins in their last 14 games. You could be doing worse things on a Friday night than seeing Joel Embiid and Hassan Whiteside go at it.

Man, are the Cavs a mess. They’re 28th in defensive rating, Kevin Love is hurt, the only thing defensive about Isaiah Thomas is his attitude right now and LeBron James is leaking rumors about a possible free agency meeting this summer with the Warriors.

Cleveland gets its re-match against the Wolves, who put up 127 points on the Cavs in January. Also that month, the Cavs gave up 148 to Oklahoma City and 133 to Toronto. With no end in sight to Cleveland’s poor defensive play, it’s going to be a major talking point until it gets improved or corrected.

Even if you’re not into the game, which will feature the Wizards without an injured John Wall, stay for Inside The NBA’s reaction to trade deadline day, which will have concluded a few hours earlier. With Wall hurt, Bradley Beal, who’s being double-teamed on 30 percent of their offensive possessions, will be the man to watch for Washington.

The Celtics and Wizards have a fierce rivalry that culminated in a seven-game playoff series in the second round last year with Kelly Olynyk breaking out for Boston in the decisive Game 7. There’s certainly no love lost between these teams, and another playoff matchup this year could easily occur.

It’ll be a bittersweet night in the Windy City, as Jimmy Butler returns to Chicago for the first time against his former team. Minnesota is faring well with Butler as its undisputed leader and will make the playoffs for the first time since 2003-2004. Butler should get an overwhelming ovation from Bulls fans, but we’ll see what actually occurs.

After a horrific start, the Bulls are getting great contributions from players they acquired in the draft night deal. Lauri Markkannen has been terrific in his rookie season, Kris Dunn has improved by leaps and bounds in his second pro season and Zach LaVine has looked strong since his season debut on Jan. 13. Chicago can now positively look back at both the Butler era and the foundation the team is slowly building thanks to the trade.

This matchup is exciting and sad all at once. It’s exciting in that this could be the conference finals series for the second straight year, even as San Antonio transitions from the Duncan-Parker-Ginobili era to a team that’s still 34-19 despite so many injuries. It’s sad because Kawhi Leonard, the best defender in the NBA, is out indefinitely, leaving the Spurs with a huge hole in trying to contain Kevin Durant and Klay Thompson. It’s sad because even if everyone was healthy, it might not be a competitive playoff series if it happens in May.

This is a less depressing potential conference finals preview for ABC, with Isaiah Thomas actually playing in Boston for the first time since the Kyrie Irving trade this past summer (he was still injured when the Cavs visited the Celtics in January).

While Cleveland’s defense is abysmal, Boston has the best D in the league thus far. The Cavs will still be in important games as long as LeBron James is on the team, so this could come down to young Celtics like Jaylen Brown and Jayson Tatum executing on the offensive end. Since this is their last regular season meeting of the season, we won’t see these teams play again until (hopefully) the playoffs. This is one you can’t miss.

Warriors-Blazers is one of the most fun matchups to watch because of amazing guard play and high-scoring games, though Portland is in the middle of the pack this season on offense and in the top 10 in defense. Damian Lillard is finally an All-Star for the first time and C.J. McCollum put up 50 in three quarters on Wednesday against Chicago, and those two always get hungry and motivated when they play Golden State. Lillard averages 25.8 points in his career against the Warriors, his third-highest average against any team.

Their second nationally televised matchup this month, these two teams get to see how they stack up against each other following their anticipated improvements prior to the trade deadline. Will OKC replace defensive stopper Andre Roberson, who’s out for the season with a ruptured left patellar tendon? Who isn’t excited when Stephen Curry and Russell Westbrook go head to head? Who isn’t excited to see Kevin Durant against his former team?

Oklahoma City is 22-9 in its last 31 games after an 8-12 start, but have a lot to figure out before the end of the regular season, including perimeter defense and playoff rotation.

As of right now, the team that made the biggest news in the NBA this week and the team with the league’s top young player each only have one national TV appearance this month. We decided to make up for this injustice by imploring you to watch the Bucks and Pistons on League Pass.

Detroit made waves with a blockbuster deal for Blake Griffin, who debuts for his new team on Thursday. The Pistons probably aren’t done trading, so we could see a totally new team by the time this game happens, as Detroit looks to make a playoff push. Milwaukee is 4-0 since replacing Jason Kidd with Joe Prunty as head coach, and don’t rule out the Bucks making a big trade over the next week, perhaps for Clippers big man DeAndre Jordan.