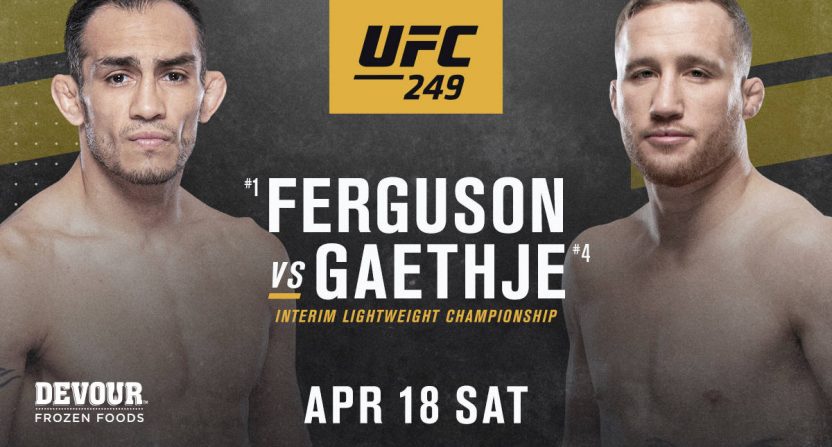 UFC 249 is scheduled to take place on April 18th, from a location yet to be announced. It was initially scheduled to be in Brooklyn with a main event of Tony Ferguson vs Khabib Nurmagomedov, but will now take place *somewhere* with a main event of Ferguson vs Justin Gaethje, thanks to Nurmagomedov flying back to Russia in March and being unable to leave thanks to the country shutting down its borders.

The event is also scheduled to take place on pay-per-view, meaning that if you want to watch one of the few sports events scheduled to happen in the coming weeks and months, you’re going to have to shell out $60, and that will be for a fight announced less than two weeks before the event itself. Given that the card itself isn’t particularly strong outside of the main event (at least, the card as it was announced weeks ago), it seems like the UFC and ESPN are just trying to take money from the pockets of fans at a time where many people have been laid off, furloughed, or had their hours and/or salaries cut. This fight card is the only game in town (again, if it happens, which I’m skeptical of) over the upcoming weeks, and it’s pretty shitty to make sports-starved fans pay extra for it.

What would make the most sense for both the UFC and ESPN is to put the event on ESPN, rather than on the ESPN+ PPV service. The network has nothing going on that Saturday, and the UFC card (as diminished as it may be) will draw way more viewers than 30 for 30 shorts or SportsCenter, the tentative programming on air two Saturdays from now.

I also think there’s an opportunity to draw new fans in and play the long game, rather than prioritizing short-term PPV sales. The switch from Khabib to Gaethje has helped minimize much of the hype the main event had, and that will likely also drag the PPV buyrate down. It’s not as if the UFC would be giving away a heavily hyped fight or a fight involving a megastar without a belt – the main event is probably going to be an entertaining, exciting scrap, but it’s an interim title fight signed on two weeks notice. If Ferguson and Gaethje have the fight many are expecting, and it was on cable rather than PPV, that would help hype the fight between Khabib and the winner more than if the fight was hidden behind the PPV paywall.

It will be interesting to see if this card actually happens, and if there is blowback from the state where it takes place. If it doesn’t, this whole argument was moot, but if it does take place, and takes place on PPV, you have to wonder if the UFC and ESPN missed a huge opportunity to grow the fanbase and throw sports fans a bone.