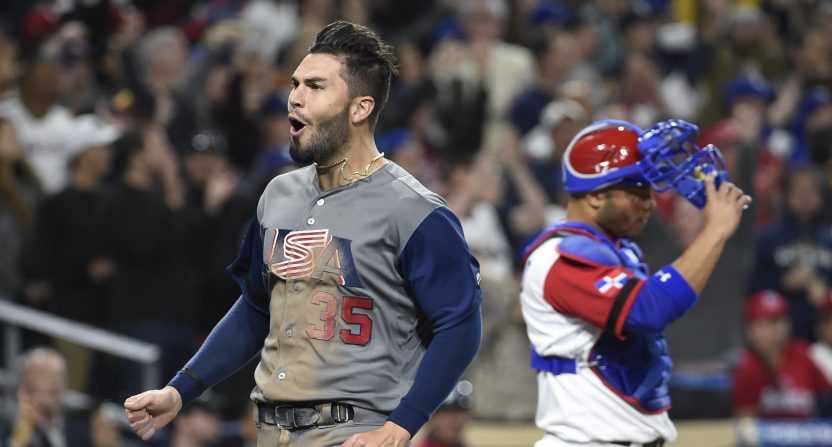 Tuesday and Wednesday night were like something out of a Major League Baseball executive suite fantasy.

First, the United States and Japan squared off in a tense and exciting World Baseball Classic semifinal. The baseball was good, there was ample buzz online and 1.4 million people tuned in to watch on MLB Network, the channel’s highest ever number for a non-MLB playoff game.

Twenty-four hours later, the U.S. was in the final, facing an undefeated and deeply enjoyable Puerto Rico team. The game wasn’t nearly as close as on Tuesday—Team USA won 8-0—but Marcus Stroman’s six-inning no hitter gave Americans reason to pay attention, and it’s safe to assume the ratings were even better. (UPDATE: MLB Network announced that 2.3 million people watched the final, making it the second most viewed telecast in the network’s history.)

Those two near-perfect nights capped a World Baseball Classic that must be considered a rousing success for MLB Network and for Major League Baseball. We don’t yet have full ratings data, but what we do have suggests viewership sky-rocketed from the previous WBC in 2013. That year, the most watched game attracted 883,000 viewers, about 40 percent below what Tuesday’s USA-Japan semifinal drew. And according to Sports Media Watch, Monday’s semifinal between Puerto Rico and the Netherlands was up 34 percent from the comparable semifinal in 2013, between Puerto Rico and Japan.

Some of this owes simply to MLB Network’s increased visibility. More people both know about the channel and get the channel than four years ago, and the network has likely improved at marketing the WBC since its last go-round. And certainly Team USA’s run in the tournament bolstered ratings compared to 2013, when the U.S. bowed out in the second round.

But clearly the WBC itself is growing in relevance. Total attendance for the tournament surpassed a million fans for the first time, and that was before more than 50,000 people bought tickets to Wednesday’s final.

The attendance tonight at Dodger Stadium for the World Baseball Classic Final is 51,565. pic.twitter.com/NeZnVwLpei

And anecdotally, the WBC seemed to attract more attention on Twitter and in major media outlets than ever before. Some of that likely had to do with the Team USA’s strong performance, but it couldn’t have hurt that they games and the teams playing in them were so consistently exciting.

For fans who watched from start to finish, there were too many memorable games to list. Israel upset South Korea to open the tournament. Italy pulled off an incredible comeback over Mexico. Nelson Cruz whacked a home run to beat the United States, which got its revenge a week later when Adam Jones robbed a Manny Machado homer to eliminate the Dominican Republic. Japan walked off against the Netherlands in the first game under the new (and fairly absurd) extra-inning rules. Then a wildly entertaining Puerto Rico team pulled the same trick to beat the Netherlands in the semifinal. The USA-Japan bout was crisp, close and well-played. Even the final, a blowout, featured Stroman’s magnificent performance.

The WBC once again exposed Americans to a different brand of baseball than we see in the Major Leagues. The energy and enthusiasm of fans from Japan, Puerto Rico and the Dominican Republic was unlikely anything you’ll see at an MLB ballpark. And the raucous atmosphere in the stands was matched by the swagger on the field. Cruz smiling giddily as he rounded the bases. Baez celebrating a caught stealing before actually applying the tag. Wladimir Balentein flinging his bat after a home run as if it had offended him. It was all a joy to watch.

Diehards were going to embrace the WBC no matter what the games looked like because competitive baseball in March is too good an offer to pass up. But with the quality of play so high and the drama so rich, even casual fans found plenty to love.

Of course, there’s huge room for growth for the WBC. For one thing, the United States must convince its A-list players to sign up. This USA team featured plenty of great players but missed the star-power of Mike Trout, Bryce Harper, Clayton Kershaw, Kris Bryant, Madison Bumgarner, Max Scherzer and on and on. And impressive as ratings were on MLB Network, the tournament would be better served on ESPN, which drew 2.8 million viewers to the U.S.-Japan semifinal in 2009.

Then there’s the issue of game times. Because the U.S.’ second-round pool was in San Diego and the tournament semifinals and finals were in Los Angeles, most of the WBC’s most appealing games got started as kids on the East Coast were going to sleep. The U.S.-Dominican Republic winner-moves-on game in the second round should have been one of the events of the tournament. But because it aired at 10 p.m. ET on a Saturday night during March Madness, most sports fans barely noticed it.

These issues must all be worked out for the World Baseball Classic to reach its potential, but the tournament—which entered this spring facing a true existential crisis—appears to be trending in the right direction. The WBC will never approach soccer’s World Cup, but could it match, say, the Olympic basketball tournament in attention and prestige? There’s no obvious reason why not.

The World Baseball Classic has always been a great idea. In 2017, it became a great event, and we all reaped the rewards.