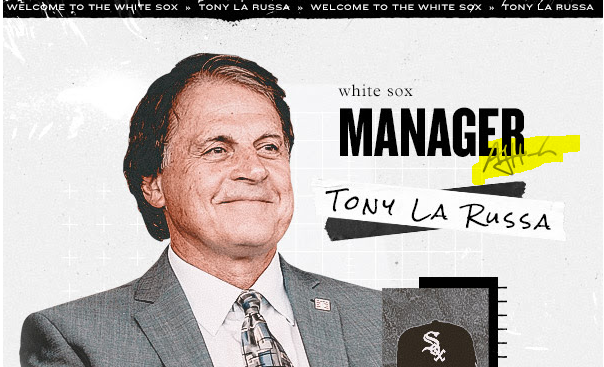 The Chicago White Sox’s decision to hire 76-year-old Tony La Russa as their new manager drew lots of criticism on its merits, but it’s notable that the team even appears to have tripped over their announcement of it. Former Houston Astros manager A.J. Hinch (just coming off a one-year suspension for his role in the Astros sign-stealing saga) was widely discussed as a candidate for the White Sox job, and as per several Twitter users, the actual White Sox e-mail announcing the hire of La Russa included Hinch’s signature:

Confirmed lol. This is so White Sox it hurts. pic.twitter.com/xSvUHbutWu

I like the one with AJ Hinch signature better pic.twitter.com/YpRYSBsFfa

The White Sox fixed that image and added La Russa’s signature by the time they tweeted it out:

Tony La Russa, a member of baseball’s Hall of Fame, the third-winningest manager in baseball history, a three-time World Series champion and a four-time winner of the Manager of the Year Award, has been named the new manager of the Chicago White Sox. pic.twitter.com/RKP24rleHP

But that’s still a remarkable error, especially considering the reports that the White Sox “never seriously considered anyone else” and never interviewed Hinch. And that raises a lot of questions on why their social media team would have a graphic with a Hinch signature ready to go.

Update: ESPN’s Jesse Rogers has more on that part of the story:

A glitch in a graphic file that was emailed to some fans announcing the Chicago White Sox‘s hiring of new manager Tony La Russa on Thursday contained a signature of AJ Hinch on a picture of La Russa.

The mistake was due to multiple variations of the graphic being prepared for various candidates, according to a team source, although Hinch was never interviewed.

At any rate, this is yet one more way this announcement has gone poorly for the team.