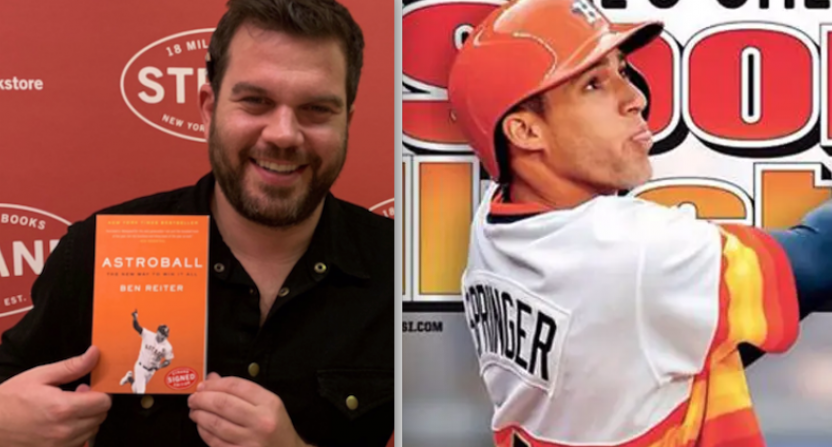 The Houston Astros won’t win another World Series in 2020. However, that would’ve created quite an ending — or at least a compelling epilogue — to Ben Reiter revisiting the scene of his greatest professional success for his new podcast series.

Reiter is best known for the 2014 Sports Illustrated feature that looked at how the Astros were changing the game, a cover story that predicted Houston would win the World Series by 2017. The writer followed that up with 2018’s Astroball, a book that expanded upon what he initially reported, chronicling the methodology and key figures which changed the formula for baseball success.

As first announced in February, Reiter is producing an audio docuseries on the Astros’ 2017 sign-stealing scandal, profiling the people and events that led to a culture that was willing to pursue an unethical advantage over the opposition in order to win. There’s also some personal stake for Reiter, who seeks to redeem himself for missing the Astros’ cheating scheme while documenting how they built a championship organization.

The beginnings of the Astros’ sign-stealing scheme… pic.twitter.com/Cwk8Nri1R0

That series, The Edge, debuted earlier this month. As of this writing, three episodes are available for download with new shows posted each Wednesday. The series will have six episodes altogether, each focusing on a different aspect of the circumstances which led to the 2017 scandal. (Maybe there would’ve been a bonus episode had the Astros advanced to the World Series. If they’d won, that would’ve seemed obligatory.)

Related: Baseball accomplishes its goal of implementing a punishment that looks worse than it really is in Astros sign stealing scandal

Episode 1, “Bang Bang,” profiles Mike Bolsinger, the pitcher who embodies the harm that the Astros’ sign-stealing inflicted upon unsuspecting opponents. Maybe Bolsinger wouldn’t have lasted long in the major leagues anyway, but his career was effectively finished after Houston lit him up for five runs, four hits, and two walks in just one-third of an inning during an August 24, 2017 game.

“It was like they knew what I was throwing…” pic.twitter.com/KRjht8yVT0

Episode 2, “Star Gazers,” looks at Jeff Luhnow, the general manager who overhauled the Astros’ methods for building a baseball team — which eventually influenced the entire sport. Former Astros coach Dave Tremblay explains how Luhnow’s unconventional approach clashed with many of the baseball people who were in place. The episode also serves as a history of the franchise, profiling Judge Roy Hofheinz, the man largely responsible for Houston having a major league team.

“You guys gotta get along with people a little bit better.” pic.twitter.com/GW0bIRAfRJ

Episode 3, “Smart Guys,” takes a wider view of baseball history and the role that sign-stealing has played in the sport for decades. Reiter also shares a previous interview with Carlos Beltran, the veteran slugger revealed to be one of the ringleaders in Houston’s sign-stealing scheme, applying and teaching what he’d learned from his years of facing opposing pitchers. (That involvement cost Beltran his job as manager of the New York Mets before the 2020 season was played.)

The Edge might be more interesting to those who don’t follow baseball nor Houston’s 2017 cheating scandal closely. Reiter includes a lot of baseball history but also explains the ideological shift within baseball, following the philosophies reported in Michael Lewis’s 2003 book Moneyball as they evolved with organizations like the Astros.

(With the Moneyball film now available on Netflix and currently among the platform’s top 10 most-viewed movies and TV shows, this podcast could be an intriguing follow-up for many.)

But the docuseries also serves to recap how baseball got here. And though the Astros did take their pursuit of an advantage over the competition too far, Luhnow and company also built the model for how baseball teams are built in the era of analytics and data, and “non-baseball” people leading the industry.

“Do I wanna do this?” pic.twitter.com/zluRjghd3O

With three episodes as of this writing, The Edge could become more compelling by telling us what we don’t already know. Reiter’s original reporting was based on access nobody else had and thus provided us with detail and insight not available from anyone else.

Will we learn more about how the Astros’ sign-stealing worked? Will there be interviews with those who played important roles in the scandal and its uncovering? Does Reiter speak to pitcher Mike Fiers, who revealed his former team’s cheating? What about more from the teams Houston defeated in the 2017 postseason en route to a World Series title, notably the New York Yankees and Los Angeles Dodgers? What about Alex Cora and Carlos Beltran taking what they learned to other organizations, connections that eventually cost them their jobs?

Related: Yankees’ Luke Voit on Astros’ electronic sign-stealing scandal and fallout: “It sucks and it’s frustrating and it’s a lot of BS.”

Maybe most importantly, did Reiter miss something in his original reporting that he should’ve followed up on? Did his pursuit of one story cause him to overlook a different narrative? Anticipating that self-reflection might be what makes listening to this series most tantalizing. Hopefully, there’s a satisfying payoff by the end.