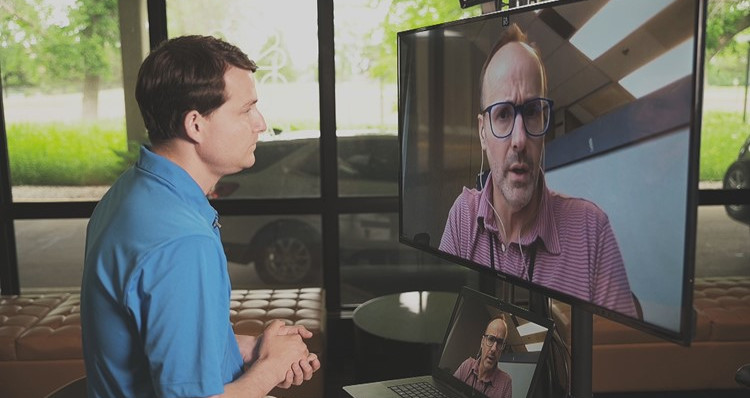 The Chicago White Sox’s home game Monday night against the Minnesota Twins will be going ahead as planned despite the shooting earlier in the day in nearby Highland Park, IL that killed at least six and injured at least 30 others. One broadcaster calling that game has a particularly close connection to the shooting; that would be Twins’ radio broadcaster Cory Provus (with that broadcast team since 2012), who grew up in Highland Park, and was back there eating breakfast with family Monday morning, putting him only a couple miles away when the shots rang out. Provus (seen at right above) spoke to Danny Spewak (seen at left above) of Minneapolis NBC affiliate KARE 11 about that experience Monday afternoon, and said he learned about this from his brother, and it came in an area he knew well:

Around 10 a.m., Provus was enjoying a late breakfast with his parents, who still live about a mile and a half from downtown Highland Park, when the family received an urgent phone call. It was from Provus’ older brother, who lives in Highland Park but is currently on vacation during the holiday.

“He said there was a live shooter at the Fourth of July parade downtown. And I said, ‘what?'” Provus recalled in a Zoom interview with KARE 11. “Within minutes, we could hear sirens and helicopters.”

…As a kid, he had often attended the Fourth of July parade, always a source of warm memories.

“My parents would bring me in my stroller and we’d sit there with the music and the floats and the food, and it was what July 4th was all about. It was about family and celebrating, and today it turned into tragedy,” Provus said. “It really is sad what took place.”

Provus had some tweets about this Monday as well:

Mass shooting in my hometown of Highland Park, IL, this morning. Shooting took place during the annual 4th of July parade in downtown HP not long after it began. I attended this parade many times during my childhood. The shooter is still active and there are reports of fatalities

FYI. I’m currently in HP with family and we’re only 2 miles from downtown. The sounds of sirens and helicopters was constant and alarming.

Provus told Spewak he expects the moment of silence before the game will hit him hard, but he expects he’ll soon be able to focus on the game and take his mind off what happened in Highland Park. But he added that he isn’t that surprised that this kind of violence could hit even his hometown.

“That will hit me pretty hard. Once the game starts, the amazing thing about this sport is it does bring people together,” Provus said. “Once we get through the moment of silence, through the national anthem, and the first pitch is thrown by Johnny Cueto and hopefully Luis Arráez hits a double down the right field line, then that sadness I think will turn into a smile, for just about three hours. Real life will be on pause and we’ll watch a baseball game and hopefully the Twins prevail tonight.”

But his hometown of Highland Park will never be far from his mind.

“Am I taken aback that I can’t believe that this happened in downtown Highland Park? No. Because that’s our world today. With the gun laws that we have in our country, they’re going to keep happening. That, to me, is a problem, and those are my feelings on it,” Provus said. “I know people watching it right now probably will disagree, and if so, you’re entitled to your beliefs, I’m entitled to mine. But to say, ‘I can’t believe this happened in Highland Park, Illinois,’ I think is just flat-out naïve.”