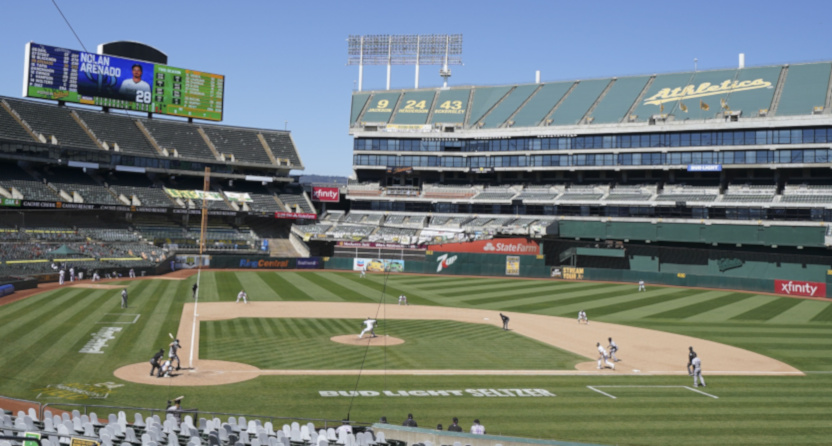 Back in February, the Oakland A’s announced that they wouldn’t have their games carried on any local terrestrial radio station in 2020, instead only offering radio broadcasts of their games in the Bay Area via streaming service TuneIn. (They continued to maintain terrestrial radio deals with stations outside the area, including in Sacramento and Fresno.) But, six games into their 2020 season, the A’s (seen above during a home game against Colorado Wednesday) have now reversed course, with Susan Slusser of the San Francisco Chronicle breaking the news Thursday that they’ve signed on with business talk station Bloomberg 960-AM (KNEW) in Oakland. This also comes with their streaming option shifting from TuneIn (which has a wider MLB deal) to KNEW parent iHeartRadio. Here’s more from Slusser’s piece:

The Chronicle has learned that on Thursday, the team will announce that they are partnering with Bloomberg 960-AM in Oakland to air the remaining 54 games of the 60-game season. The first game to be broadcast on the station will be Friday’s, when the A’s play at Seattle.

“We had been hearing from a lot of our fans, especially with COVID – people are very budget-conscious and having a free option was really important,” team president David Kaval told The Chronicle. “We want to be as inclusive as possible in allowing people to consume A’s baseball, and free terrestrial radio is the best way to do it.”

In addition, the A’s are switching streaming services, joining iHeartRadio. The team’s final day on the TuneIn app was Wednesday and A’s Cast will continue to be available on the team’s website, athletics.com.

It seems to make a lot of sense for a team to be on terrestrial radio in its market, especially, as Kaval notes, in times where a lot of people aren’t eager to pay for a streaming service. Of course, it’s somewhat understandable why the A’s initially made the move they did, as they didn’t currently have great options with local sports stations. They left sports station 95.7 The Game after 2018 and signed on with conservative talk station KTRB for 2019, but many fans didn’t like the A’s brand associated with the other content on that station.

And both The Game (Warriors) and KNBR (Giants) already had established relationships with other local teams that would often conflict with A’s broadcasts, a big part of why the A’s opted out of their contract with The Game ahead of the 2019 season. So they didn’t have a ton of local radio options that would provide the signal strength they wanted without providing other problematic content. And while KNEW seems like a fair-enough fit for the moment, perhaps the station wasn’t available or interested enough back when the A’s made their decision to abandon terrestrial radio in February.

It’s unclear exactly what changed since that initial decision. Maybe the A’s were more motivated to find a terrestrial partner amidst the current economic crisis (and with increasing fan complaints about not being able to hear games), or maybe KNEW grew more interested in A’s content. Another part of this may be the streaming-service switch, which Slusser notes required permission from MLB and TuneIn given MLB’s league-wide deal with TuneIn. Maybe that wasn’t available back in February, and maybe that reduced the team’s options; it’s obviously an easier sell for a station like KNEW to pick up the A’s if they can offer their broadcasts on streaming as well. Regardless of exactly what happened here, this is a move that will definitely make plenty of A’s fans happy that they can again listen to games on terrestrial radio.