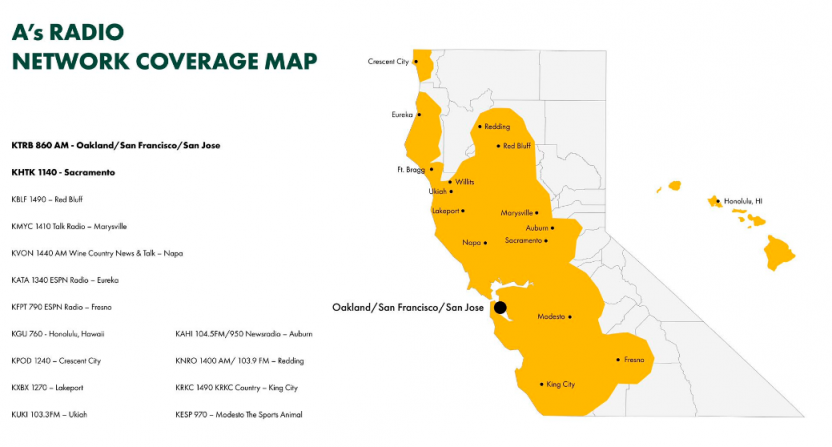 In recent years, the Oakland A’s have had a tough time finding their footing in the world.

Overshadowed for years by the Oakland Raiders and Golden State Warriors, they suddenly became the toast of Oakland sports fans when both of those franchises announced they were leaving town. The Warriors decided to move across the bay to San Francisco while the Raiders are a year away from leaving for Las Vegas. That will leave the A’s as the only major pro sports franchise in town. And if there’s a time to throw their weight around, this would presumably be it.

It hasn’t quite worked out that way, though. Following a decade-long search for a new stadium site, they finally found one near Lake Merritt in Downtown Oakland. However, the community college district that owns that land decided not to sell it. Meanwhile, their second choice came under question for everything from transit accessibility to potentially rising sea levels. They finally squared away plans for a new waterfront spot, which include also buying Oakland Coliseum, but so far have yet to come to a deal with Alameda County and the city of Oakland, respectively.

In the meantime, the baseball club might have been looking forward to having the Coliseum to themselves next season, but leave it to the Raiders to decide that they’ll stick around for one m0re year after all. Still, they’ll be gone soon enough, and that opens up a lot of revenue streams that the franchise should be able to take advantage of. Right?

That was the thinking behind their messy divorce from 95.7 The Game last year. The team exercised a clause in their contract that let them walk away from their radio home for the past eight seasons. Given that the station was also the flagship for the Golden State Warriors, the A’s were going to play second fiddle for the foreseeable future and if there was a time to strike, this might have been it. So sure of their decision, the A’s burned down the bridge on their way out, shading The Game with a tweet and plenty of hard feelings.

It’s not us, it’s you. pic.twitter.com/48LVzpqzpV

If people assumed that the A’s had a better offer waiting, that assumption wasn’t entirely true. In fact, given the timing of the move and the lack of a terrestrial suitor, some wondered if the team was simply going to go internet-only with their radio broadcast. When a terrestrial radio deal hadn’t materialized by January, they signed a deal with TuneIn for that online broadcast opportunity. The broadcast service will provide free live streaming of all A’s games in-territory and also launch a 24/7 A’s channel that will air exclusive team content, special programming, and podcasts.

Just in time for the 2019 season, however, the A’s finally announced their terrestrial plans. KTRB 860, a Salem Media Group AM station that focuses on conservative talk programming, is the new flagship home of the MLB franchise. The club also announced that they were expanding their partnership with KHTK–AM 1140 in Sacramento. The new deals give the A’s their largest coverage map ever, running from Butte and Mendocino Counties up north to Fresno and Monterey in the south.

Announcing a RADIO BROADCAST AGREEMENT with KTRB 860 AM and an expanded partnership with KHTK–AM 1140 in Sacramento. The dual stations, along with 17 additional radio network affiliates, will provide the largest coverage map ever for A’s baseball. pic.twitter.com/dG3WWTHMG5

Of course, coverage maps and actual listeners are two different things. And the fact that KTRB 680 had a grand total of eight Twitter followers when the deal was announced is sure to raise concerns about the latter (That’s since been boosted to 18).

Veteran broadcasters Ken Korach and Vince Cotroneo will return for their 24th and 14th seasons, respectively, and the team will expand their pre- and post-game shows, hosted by Chris Townsend, who was hired away from 95.7 in early February. So the band is getting back together, a good sign for loyal listeners who will follow the team over. But will the talk-focused flagship station be able to draw in new listeners or promote the team the way they need to be in the region?

Until we see the numbers, we can consider the forward-thinking strategy that the club is considering with the TuneIn deal. It’s possible that any terrestrial rating losses will be offset by a generational shift online. Or it could be another in a long line of big plans that didn’t quite come to fruition (See: Murray, Kyler). The A’s are certainly more concerned about getting their stadium squared away, but if they rolled the dice poorly on their new radio deal, that’s a step backward at a time when the franchise should only be taking steps forward.