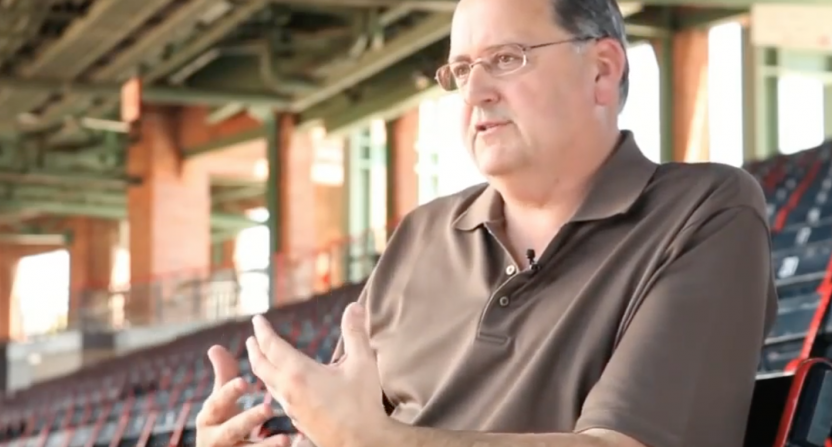 Ten months after his untimely death, Boston Globe baseball reporter and columnist Nick Cafardo has been awarded the top honor in his profession. Cafardo is the 2020 winner of the J.G. Taylor Spink Award, as voted upon by the Baseball Writers Association of America.

The Spink Award is presented annually “for meritorious contributions to baseball writing.” Cafardo is the 71st winner of the award, receiving 243 votes from 427 ballots cast, and will be honored during the Baseball Hall of Fame’s induction ceremony at Cooperstown, New York in late July.

Cafardo joined the Boston Globe as a baseball columnist in 1989. Prior to that, he covered the Red Sox for the Patriot-Ledger (Quincy, Massachusetts). Globe columnist Will McDonough pushed his bosses into hiring Cafardo, noting that he was breaking stories on the Red Sox beat that writers for the Boston papers weren’t getting.

Taking over the legendary “Sunday notes” column from Peter Gammons (a fellow Spink Award winner), Cafardo followed everything in baseball, providing his readership with news, rumors, and analysis throughout Major League Baseball, never missing a week during a 15-year span. For baseball fans and media, it was a must-read column thanks to Cafardo’s reporting and sources.

While covering the Red Sox and MLB, Cafardo followed Boston’s most glorious run of success since the early 1900s. During his time on the beat, the Red Sox won World Series championships in 2004 (breaking the so-called “Curse of the Bambino”), 2007, 2013, and 2018.

That 2018 run included a grueling 18-inning Game 6 versus the Los Angeles Dodgers that was the longest game in World Series history. Cafardo’s story from the game focused on Nathan Eovaldi, the losing pitcher in Boston’s 3-2 defeat despite pitching six innings of relief.

The announcement of Cafardo winning the Spink Award drew a standing ovation from his BBWAA colleagues with his son, Ben (who works in public relations for ESPN), in attendance.

The @BostonGlobe’s @PeteAbe had some touching words after his former colleague @nickcafardo was voted as the 2020 J.G. Taylor Spink Award winner by the @officialBBWAA. The late Cafardo was one of the greats. He’ll be honored at the @baseballhall of Fame during induction weekend. pic.twitter.com/J6whCTmF6q

It was a powerful moment at the #BBWAA meeting watching the late Nick Cafardo receive a standing ovation for winning the Spink Award with his son Ben in attendance. Nick was diligent, caring, committed, and a good friend to us all. He represents everything the award should be.

During his career, Cafardo also wrote four books: 100 Things Red Sox Fans Should Know & Do Before They Die, Inside Pitch, None But the Braves (with Tom Glavine), and If These Walls Could Talk: Stories From the Boston Red Sox Dugout, Locker Room, and Press Box (with Jerry Remy). In addition, he did television work for NESN and MLB Network.

Cafardo passed away this past February, suffering a pulmonary embolism at the Red Sox’s spring training ballpark. Though Feb. 21 was supposed to be his day off, Cafardo wanted to talk to Boston manager Alex Cora for a story he was working on. He was 62 years old.

The late, great Boston baseball-writing legend, Nick Cafardo, is the winner of the 2020 JG Taylor Spink award. No one more deserving. We miss that guy every day.

“He loved the flow of the season,” Ben Cafardo told The Athletic’s Evan Drellich. “Maybe not every single day you’d get a major story. But there was always a matter of time, especially in Boston, where something would break and there would be something that would consume you for the day. He loved that. And I think he loved the romance of the game as well.”