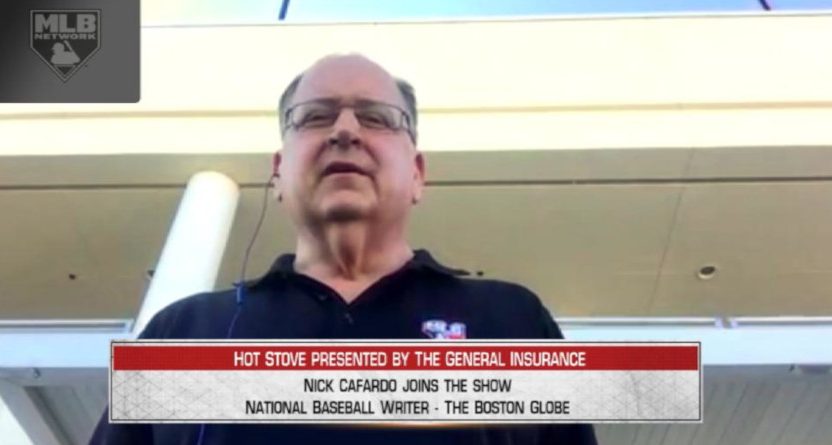 The baseball media world has lost a long-time presence, with Boston Globe national baseball columnist Nick Cafardo passing away Thursday at 62.  As per a report from Bob Hohler in the Globe, Cafardo was at the Red Sox’s Fort Myers, Florida spring training home of JetBlue Park on a day off when he suffered a pulmonary embolism:

Cafardo’s love of baseball and commitment to his craft compelled him to report to JetBlue Park, the spring training home of the Red Sox, on one of his rare days off. He was apparently stricken by an embolism at the park, and members of the Sox medical team were unable to revive him.

Cafardo first joined the Globe in 1989 after covering the Red Sox for the (Quincy, MA-based) Patriot-Ledger; he spent time there covering both the Red Sox and the Patriots before fully returning to baseball in 2004. Comments from Globe editor Brian McGrory indicate just how much Cafardo will be missed at the paper:

“Nick was one of the best people to ever walk through our doors — generous with his time and insights, immensely knowledgeable, deeply devoted to the Globe,”’ the Globe’s editor, Brian McGrory, said. “He had a view of the Red Sox and the game on a national scale that is virtually unrivaled.”

“For those reasons, he was one of our most read writers, constantly attracting followers near and far, his weekly baseball notes column being destination reading for tens of thousands of people.”

And Cafardo will be missed around the baseball world, too. He also wrote several books, including 2002’s The Impossible Team on the Patriots, and coauthored Tom Glavine’s 2016 book Inside Pitch and Jerry Remy’s forthcoming book If These Walls Could Talk, and he served as a correspondent for NESN and MLB Network. (The above photo is from a MLBN segment earlier this month.) Plenty of sports media figures took to Twitter Thursday to pay tribute to Cafardo; here are some of those tweets.

We are crushed. They don’t get better personally and professionally than Nick Cafardo. Rest In Peace, my friend.

I’ll remember Nick’s laugh, which punctuated so many stories, new and old, during conversations at Fenway. And I’ll remember how a truly great journalist and man took time to offer advice to me, as a 19-year-old sports desk clerk. I am heartbroken by the loss of my friend. https://t.co/RnINuqleja

This is devastating. I can’t think of any words. RIP Nick. https://t.co/fFZvHP0cjd

Nightmare news from spring training. He was one of the true good guys – with everybody. #RipNick https://t.co/H79y3z5CDj

I interned at the Globe years ago. From Day 1, he made me feel I belonged and he went out of his way to show me the ropes. Baseball loses a kind and caring man and a terrific journalist. RIP Nick. https://t.co/xr7XmSsmcK

A lot of people have reached out about Nick and on behalf of the Globe, thank you.

Nick loved his family, his friends, the paper and baseball and being around him for 10 years as a colleague was a joy. We had so much fun.

This won't be the same without him. Just an awful day.

Stunned & heartbroken. Nick was one of the best people in this business, kind, gentle, a pro’s pro. A treasured friend. One of my Cooperstown housemates. A dinner & press box buddy. Condolences to his family & all who loved him. I’m gonna miss you buddy https://t.co/J2d7iKTX5N

One of the first TV spots I did, c. 2006, was for Boston Globe SportsPlus, with myself and the late @nickcafardo talking to a host. I was as green as the cover of @basebalpro's Mind Game (which IIRC I was promoting) but Nick was patient & encouraging, both on set & backstage. RIP

This can't be true. Nick and I broke in on the beat together. One of my best friends on the beat. I can't believe it. Great reporter, great writer and a better person. RIP. https://t.co/81r9ugppGY

Spring is supposed to be a time for rebirth. Not for this. Nick was a good man who loved the game. Condolences to his family and all those who knew and befriended him. https://t.co/1lTutEblNL

Man, this is terrible. Nick was a great guy and a great writer. https://t.co/QD71vdGVm6

Our thoughts go out to Cafardo’s family and friends.