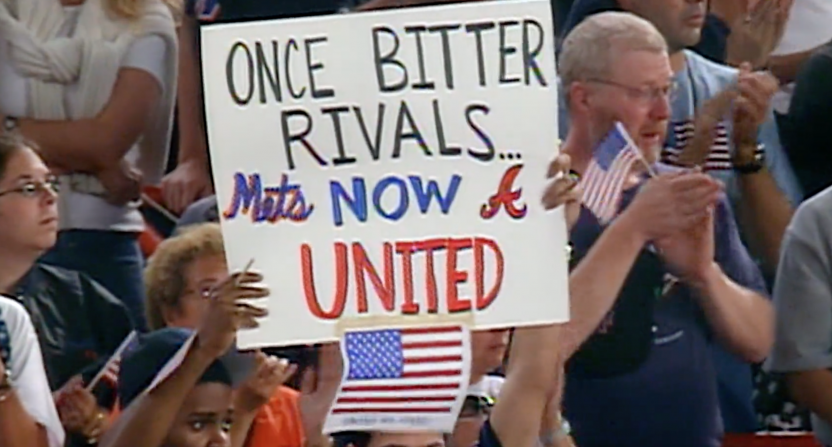 On the 20-year anniversary of 9/11, many documentaries and retrospectives will fill the airwaves. But Major League Baseball played a key role in bringing a community together, restoring a sense of normalcy to a world that suddenly made no sense, and providing fans with a few moments and memories to feel good about amid major tragedy.

That effort is captured well in MLB Network’s documentary, Remembering the Game for New York, which premieres Thursday, Sept. 9 at 10 p.m. ET. The one-hour “MLB Network Presents” special look back at the game at Shea Stadium between the Atlanta Braves and New York Mets, played 10 days after the World Trade Center was attacked, killing 2,977 people.

Initially narrated by MLB Network analyst Mark DeRosa, who played for the Braves at the time and is a New Jersey native, the documentary focuses on six players involved in the game who grew up in the New York area. 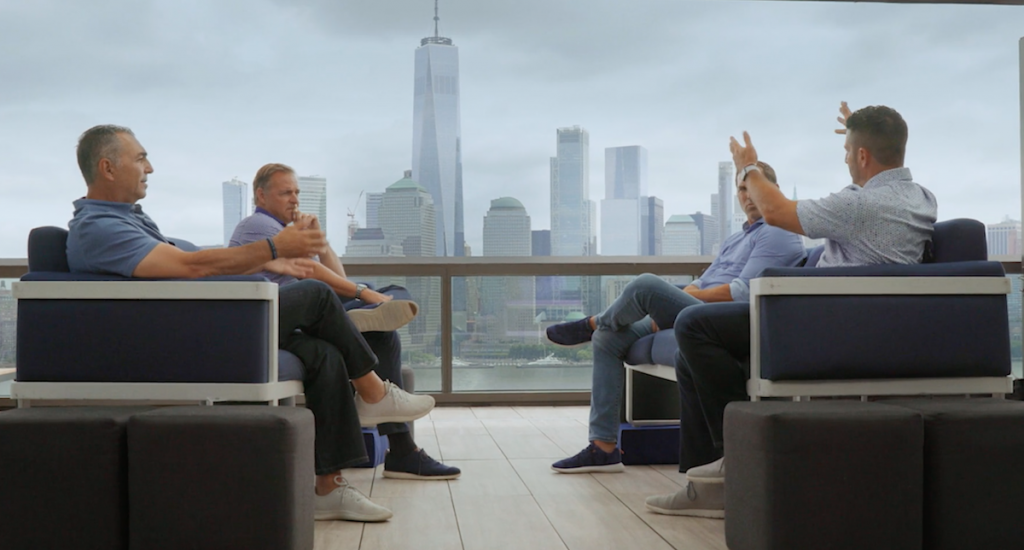 Remembering the Game for New York picks an ideal setting for the conversation among DeRosa, Leiter, Franco, and Marquis. The four meet on a terrace at RoofTop Plaza at Exchange Place in Jersey City, New Jersey, right across the Hudson River from the World Trade Center complex. One World Trade Center is always in view as the players share their memories of 9/11 and participating in the game 10 days later.

What the documentary does very well is provide just enough in terms of footage to recall the events of 20 years ago. We all have our memories of 9/11. We remember where we were when those planes struck the Twin Towers. Some of us lost loved ones. We feared for people we knew in New York City.

Naturally, news footage is shown of the attack, the clouds of smoke and debris rolling through the streets, people running in terror. But the film quickly moves on to the players recalling their memories of the day, how the morning began normally only to fall into horrifying uncertainty.

Leiter voices the conflict players felt as New York attempted to clean up and begin healing. (“Should we be here?”) Was this a time for “celebrity ballplayers” to help or did they just need to get out of the way? But as all four ballplayers describe, they could see that their efforts and support mattered to the workers — the firefighters, police officers, and medical personnel — on the scene. And eventually, they knew how meaningful it would be to play baseball again.

“We return to our national pastime,” said New York Mets public address announcer Roger Luce on Sept. 21, 2001, “in part to show that America can and will go on.”

Somehow, baseball rose to the occasion. The Braves’ pitching rotation worked out so that Marquis would start the game at Shea Stadium. DeRosa and Martinez appeared in the game as reserves. Franco and Karsay pitched in relief. And the Queens native figured prominently in a moment that nearly seemed scripted, serving up Mike Piazza’s eighth-inning two-run homer that gave the Mets the lead in a game everyone — including the Braves — wanted them to win.

As DeRosa says, it was the one time he could remember when he didn’t mind if his team lost the game. Karsay, who was furious with home plate umpire Wally Bell’s strike zone, acknowledged that “they needed it more than we needed it.” Franco called the entire event “a little Band-Aid on a big wound.”

The role sports can play in bringing people together and providing a much-needed distraction can often be overstated. But the Braves-Mets game on Sept. 21, 2001 certainly did that. The Mets gave New York a brief moment of joy. Baseball showed the country that life could and must continue. It was the only way we would get through this.

And MLB Network’s documentary plays the same role. The horror of 9/11 is acknowledged to place the ballgame in proper context. We see these players who called New York home get emotional at the memory. But for a brief time, we get lost in the game, in a transcendent moment that came at exactly the right time. Everyone involved in that game won’t ever forget that night (Karsay says he watches the game every year) and Remembering the Game for New York makes sure the event is properly commemorated.