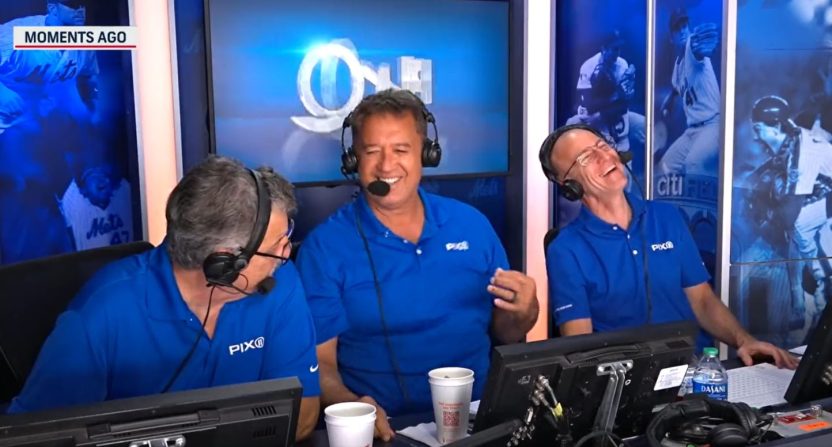 It wasn’t quite Mike Francesa falling asleep on-air, but Keith Hernandez was caught blatantly not paying attention during a New York Mets broadcast on SNY over the weekend.

During the second inning of the Mets game against the Colorado Rockies Sunday afternoon, play-by-play voice Gary Cohen noted the St. Louis Cardinals and Atlanta Braves would be playing on ESPN later that night.

“I might have to go to my favorite little spot for dinner and watch that game,” the former Mets and Cardinals first baseman replied.

Gary said Jake Odorizzi was starting for the Braves tonight.

But as Hernandez began thinking about his favorite little dinner spot, his mind apparently left the booth and ignored Cohen offering the pitching matchup. 50-seconds after Cohen clearly stated Odorizzi and Wainwright were scheduled to start the Sunday Night Baseball game, Hernandez said, “that’s gonna be Wainwright for the Cardinals” before taking a long pause to ponder who might be on the mound for Atlanta.

“Did you just say it, Gary?” Hernandez asked after realizing he just got caught daydreaming like a student who was called on by their teacher after they clearly weren’t paying attention in class, a feeling I certainly don’t miss. “Sorry, I wasn’t paying attention. How many times have I done that over the last 17 years?”

While there is no official tally, the Mets broadcast booth hypothesized that the answer was a rather high number. Even some of baseball’s biggest fans, like Keith Hernandez and Tony La Russa, would have to agree the sport can be long and mundane at times, warranting a brief nap or daydreaming trip. It’s just surprising to see it happen as early as the first or second inning.