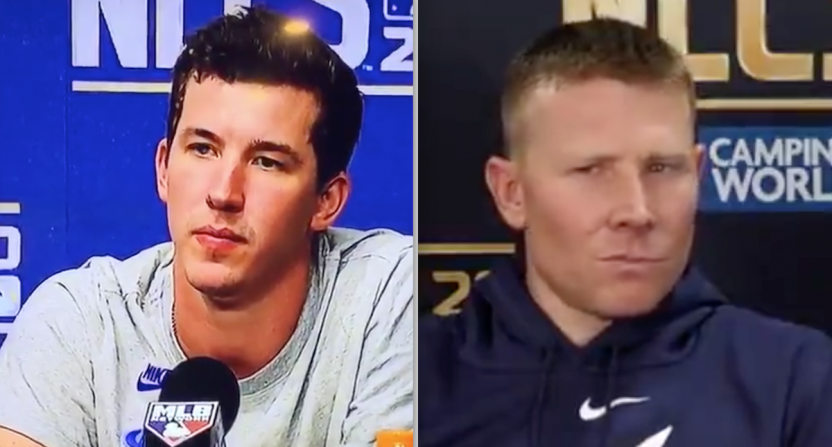 From a baseball standpoint, the story of the 2020 National League Championship Series is that the Atlanta Braves hold a two-games-to-none lead over the heavily favored Los Angeles Dodgers.

Braves pitching has largely handcuffed a Dodgers lineup that scored the most runs in Major League Baseball during the regular season. Additionally, Atlanta’s batters have pummeled a Los Angeles bullpen weakened by the decline of formerly dominant closer Kenley Jansen.

Yet from a media standpoint, among the highlights from the NLCS (or lowlights, depending on your view) has been unusual questions that players have faced during post-game press conferences.

Following Tuesday’s 8-7 Atlanta win, Braves closer Mark Melancon was perplexed by a line of questioning from The Athletic’s David O’Brien about the Dodgers scoring four runs in the ninth inning. The narrative coming out of the game seemed to be that the Los Angeles offense had revived and could carry that into Game 3. Yet O’Brien framed his questions as if Atlanta had lost the ballgame and Melancon had blown the lead.

“Can you take a positive out of almost blowing that lead?” asked O’Brien.

As you can see in the video, Melancon thought that was a strange question because the Braves hadn’t blown the lead, despite the Dodgers cutting the margin from five runs to one. Atlanta won the game and has a 2-0 series advantage.

O’Brien tried to clarify, asking if the Braves could still feel good about the outcome after “surviving” to win. But he seemed to be projecting an idea that Atlanta’s relievers might be discouraged after allowing four runs in the ninth. Melancon wouldn’t go with that storyline.

“I think that’s a terrible question,” Melancon responded. “I’m not even going to answer it.”

But during the game on social media, several people pointed out that Buehler was wearing extremely tight pants that appeared to be at least one size too small. “Walker Buehler Pants” was a trending topic on Twitter as a result.

Either wanting to lighten the mood or get a fun sound bite for television, Duarte tried to ask Buehler about those pants but was immediately shot down. Buehler sounded like a parent scolding a child for acting inappropriately.

“Not the time or place, Michael.” ? pic.twitter.com/O3owCSq26O

Sure, it may have been a funny question. But Buehler’s response was correct.

A postgame press conference with a player upset about a loss and a team facing the prospect of again failing to fulfill World Series championship expectations was not the right setting for such a trivial topic. That’s something to ask the next day when the mood is lighter and a player might be more willing to indulge a silly question.

Some reporters might argue that they won’t get another opportunity to ask a question readers and viewers may want to be answered. But Duarte covers the Dodgers regularly and isn’t helicoptering in for reporting now that the team is in the NLCS.

It’s understandable that reporters want to get a good quote and try something different from what the rest of the media scrum is pursuing. But athletes won’t always be willing to follow a reporter down an unusual questioning path. That’s especially true directly following a game when emotions are still high and there hasn’t been time to contemplate.